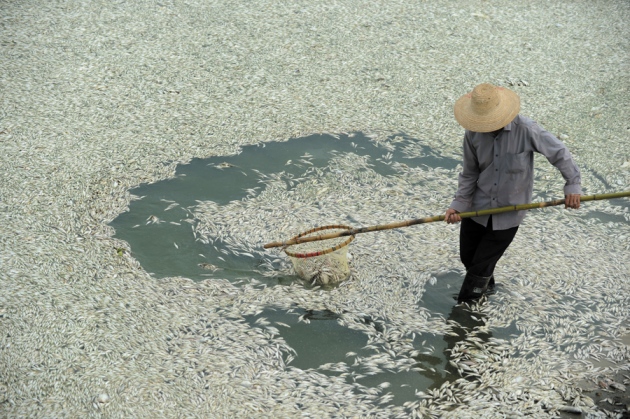 A resident of China's Hubei province clears the Fuhe river of dead fish, thought to have been poisoned by high levels of ammonia.

The EPL is perceived as the most progressive and stringent law in the history of environmental protection in China. It details harsher penalties for environmental offences — for example, for acts of tampering and falsifying data, discharging pollutants covertly and evading supervision. It contains provisions for tackling pollution, raising public awareness and protecting whistle-blowers. It places more responsibility and accountability on local governments and law-enforcement agencies and sets higher standards for enterprises.

Yet the law is not enough. For the following reasons it will face many challenges1.

First, the power of the new law is limited. The EPL can be trumped by other legislation such as the specific agriculture, forestry, grassland and water laws, which are aimed at protecting these resources. Consequently, the departments responsible for managing these natural resources could challenge EPL provisions.

Second, enforcement of the EPL will be hampered by the fragmented and overlapping structure of environmental governance in China. At present, the environment and natural resources are overseen by several agencies, including the Ministry of Environmental Protection, the ministries of water resources, land and resources, and agriculture, the State Oceanic Administration and the State Forestry Administration4. China's carbon-tax and emissions-trading systems, overseen by the National Development and Reform Commission, are not included in the law. 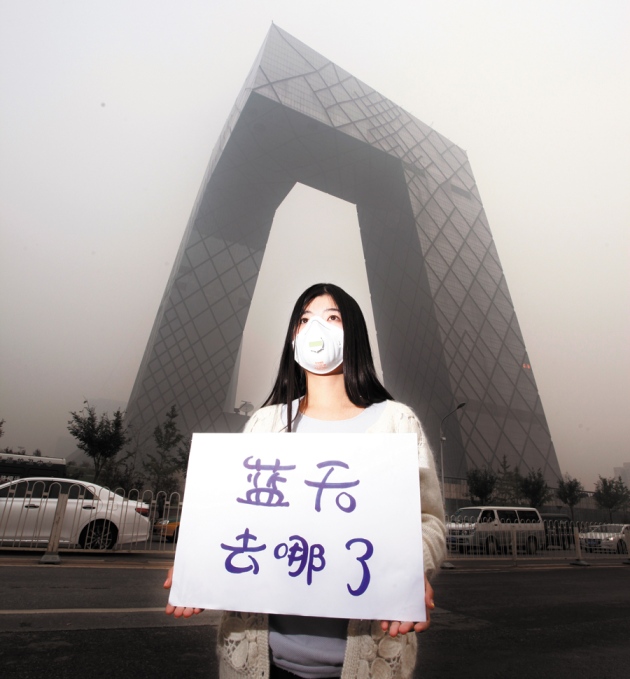 'Where has the blue sky gone?' asks a citizen in Beijing during a period of heavy smog in 2014.

Third, despite increasingly damaging pollution in China, the new EPL fails to acknowledge citizens' basic right to an environment fit for life. So far, 149 developed and developing countries, including Russia, South Korea and the Philippines, have acknowledged in their constitutions a substantial right to environmental quality5. Although China's new law clearly gives citizens, civic groups and non-governmental organizations (NGOs) the right to obtain environmental information and to participate in environmental governance, these parties (with the exception of NGOs that fulfil certain criteria) are not allowed to bring lawsuits against the government if there are, for example, serious lapses in air or water quality. A public environmental litigation system is needed to provide cost-effective redress for those affected.

Fourth, enforcement and implementation of the law may be foiled by a lack of capacity and by conflicts of interest. Environmental governance in China is mainly exercised locally by environmental protection bureaus. The environment ministry primarily provides guidance to these bodies, but does not have sufficient authority over them. Local governments (which are often more interested in economic growth) keep a firm grip on the staffing and financing of the environmental protection bureaus and hence on their decision-making4. This means that, in effect, the protection bureaus do not have the power to impose severe penalties on companies or individuals in breach of environmental statute, nor do the bureaus face legal or other consequences of failure to do so.

In October 2014, the Central Committee of the Communist Party of China decided to establish a recording, communication and accountability system. This is intended to limit judicial intervention by government officials, and to integrate promoting the rule of law into the remit of officials at all levels. The system could restrain officials, and indeed the party itself, from advising judges on how to decide on court cases, including those pertaining to the EPL.

Fundamentally, as Alex Wang, an environmental law specialist at the University of California, Los Angeles, has written, environmental protection in China needs to be raised to “a level of priority previously reserved only for the most important party-state mandates, such as economic growth, social stability, and the one-child policy”6.