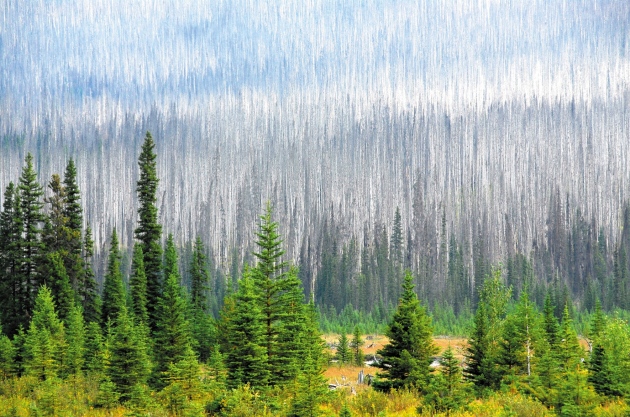 Mountain pine beetles have destroyed hundreds of thousands of hectares of forest in Canada.

The bioeconomy is rising up the political agenda. More than 30 countries have announced that they will boost production of renewable resources from biological materials and convert them into products such as food, animal feed and bioenergy. Non-food crops, such as switchgrass (Panicum virgatum), are the main focus, as well as agricultural and forestry residues and waste materials and gases.

It is one thing to write a report; it is another to put a plan into action sustainably. The biggest conundrum is reconciling the conflicting needs of agriculture and industry. In a post-fossil-fuel world, an increasing proportion of chemicals, plastics, textiles, fuels and electricity will have to come from biomass, which takes up land. By 2050, the world will also need to produce 50–70% more food1, increasingly under drought conditions and on poor soils.

There is no consensus on what 'sustainable' means. Biomass assessment is a patchwork of voluntary standards and regulations. With many schemes comes a lack of comparability. Confusion leads to mistrust and protectionism, international disputes and barriers, slow investment and slower growth.

For example, greater use of wood for electricity generation or heating may decrease greenhouse-gas emissions if it displaces coal. But retaining forests also sequesters carbon and protects biodiversity. Increased demand boosts wood-pellet prices, and puts pressure on businesses, such as saw mills, that use wood. The balance of who saves or creates emissions shifts when biomass is exported.

The geopolitical implications mirror those of crude oil. Developed countries that lack fossil fuels are thirsty for renewable energies. Some developing countries may be tempted to meet that demand without accounting for the environmental or social cost. It is in everyone's interests to harmonize sustainability standards and head off disputes before they arise. Governments should agree on criteria and define metrics for assessing biomass sustainability. And they should consider creating a centre for resolving disputes that arise over competition for land and biomass.

In 2012, the United States and the European Union laid down their intentions to grow their bioeconomies2, 3. Now, the G7 industrialized countries4 and at least 20 others either have a dedicated bioeconomy strategy in place (including Finland, Malaysia and South Africa) or have policies consistent with growing a bioeconomy (including Australia, Brazil, China, India and Russia).

The bioeconomy of Malaysia, for example, is expected to grow 15% per year to 2030. The palm-oil industry is central to that plan, as it is elsewhere in southeast Asia.

Making up 45% of the world's edible oil, palm oil can also be processed into biodiesel. The oil-palm crop is also more effective at sequestering carbon than other major crops. Using genomics in selective breeding offers great potential for improvements to the economics of palm-oil production5.

Land disputes between palm-oil companies and local communities have already begun. Between 2006 and 2010, Indonesia's palm-oil plantation area increased dramatically, from 4.1 million to 7.2 million hectares. The increase has been accompanied by a rise in deforestation, water pollution, soil erosion and air pollution, as well as restrictions on traditional land-use rights and land losses, increasing land scarcity and land prices6.

A situation that arose between Canada and the EU in 2012 illustrates how rational decision-making in different countries can lead to disputes. The EU's Renewable Energy Directive sustainability criteria for biofuels and bioliquids are non-binding for solid biomass. EU biomass sustainability standards also prohibit the use of 'primary forest' materials for bioenergy.

In Canada, forests are deemed sustainable by measures of woodland structure, composition and degree of 'naturalness'. Overall, the area affected by natural disturbances such as insect infestations and wildfire is larger than the total area of logging — and the use of such damaged trees for bioenergy holds potential. But because it stems from primary forest that has not been harvested or regrown, such wood would be excluded from importation into the EU.

A dispute arose in 2012 between an environmental organization and an energy company wishing to ship wood pellets to Europe that had originated from Canadian primary forest infested with the mountain pine beetle (Dendroctonus ponderosae). The Dutch government used the case to see whether mediation might work in such circumstances — and it did. The dispute was settled.

Increasing demand for biomass makes it likely that such disputes will recur. Limited land mean that Europe cannot grow enough biomass to meet its own future demand. Depending on bioenergy policies, biomass use is expected to continue to rise to 2030 and imports to Europe are estimated to triple by 2020. Wood-pellet use for large-scale power generation is increasing dramatically in Europe. Some countries including Germany and Denmark have become net importers. Europe may import7 80 million tonnes of solid biomass per year by 2020.

Today's biomass situation bears similarities to that in the 1980s, when a system of national agricultural subsidies in Europe threatened to start trade wars. Policies directed at producing more food combined with rapid technical progress and structural changes led to agricultural trade barriers. Domestic surpluses of farm goods were stocked or exported with subsidies — giving rise to the European 'butter mountains' and 'wine lakes' — by protecting farm producers at the cost of domestic consumers and producers abroad. The costs weighed heavily on government budgets. Consumers in countries with protected markets faced higher food bills, and producers in other countries were penalized by restrictions on access to those markets8.

The Organisation for Economic Co-operation and Development (OECD) helped to resolve that situation by developing standards for agricultural subsidies, which are accepted globally. An analogous, internationally agreed biomass sustainability governance framework is now needed.

A metric for evaluating biomass sustainability needs to be designed. Social as well as environmental and economic factors must be included. As yet there is no consensus on what criteria should be used. For example, international stakeholders (non-governmental organizations, policy-makers, research and development, bioenergy producers, end-users and traders) from 25 European and 9 non-European countries surveyed in 2011 agreed9 unanimously on only one criterion — minimization of greenhouse-gas emissions.

Aggregation of sustainability issues into a single measure requires complicated trade-offs between, say, kilograms of carbon dioxide emissions and labour conditions. Practitioners' own weightings are subjective. Life-cycle analysis — a technique to assess environmental impacts of all the stages of the manufacture, use and disposal of a product — does not look at social impacts. To define an index, multiple variables must be expressed using a common denominator.

Using price information is understood by policy-makers and the market. But placing monetary values on social and ethical costs and benefits is contentious. Differences between developed and developing countries require careful handling — for example, the different reactions to placing a cost on child labour.

A starting point could be the total factor productivity (TFP) metric used to measure agricultural sustainability. The TFP reflects the rate of transformation of inputs (capital, labour, materials, energy and services) into outputs (biomass stock). A cost is attributed to each and to the negative social and economic impacts.

To develop the TFP approach into an integrated methodology for assessing biomass sustainability, it should take account of changing conditions and local situations in biomass importing and exporting countries. For example, just like oil, the price of biomass will fluctuate. Expensive producers would be hurt. Sustainability assessment will need to take account of such fluctuations. A tenet of a bioeconomy is decentralized feedstock access — biomass-sustainability assessment needs the flexibility to take such matters into account.

Biomass metrics could be aligned with the United Nations' Sustainable Development Goals, the indicators10 of which are similar. A step towards this alignment may be achieved in November at the Global Bioeconomy Summit in Berlin. This meeting of more than 500 leaders from policy, research, industry and civil society organized by the German Bioeconomy Council (an independent advisory body to the German government) could result in recommendations around global governance and international cooperation.

Beyond that, international agreement is needed on the key biomass sustainability criteria. The OECD could host initial discussions including exploring the setting up of an international biomass dispute settlement facility. Developing countries and biomass producers outside the OECD should also be represented at such talks. These possibilities will be discussed at the OECD Committee for Scientific and Technological Policy ministerial-level meeting in October hosted by the South Korean government in Daejeon.