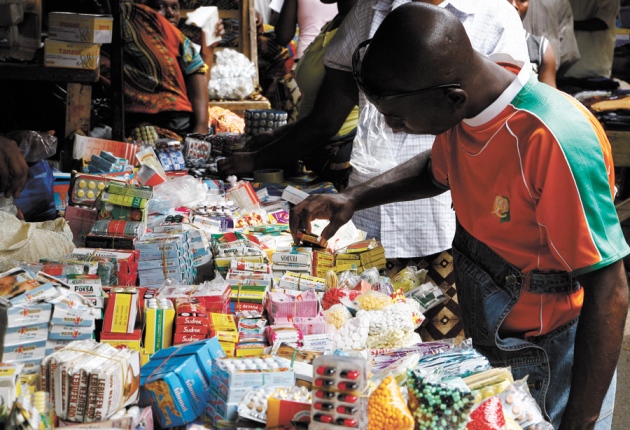 Unregulated sales of medicines in developing countries contribute to the rise in antimicrobial resistance.

Last month, the World Health Organization (WHO) produced a global map1 of antimicrobial resistance, warning that a ‘post-antibiotic’ world could soon become a reality. In some ways, it already has.

Drugs that were once lifesavers are now worthless. Chloramphenicol, once a physician’s first choice against typhoid, is no longer effective in many parts of the world. Strains of extensively drug-resistant tuberculosis (TB), methicillin-resistant Staphylococcus aureus (MRSA), multidrug-resistant Escherichia coli and Klebsiellapneumoniae are serious threats to public health. Plasmodium falciparum (the parasite that causes the most dangerous form of malaria) is developing resistance to all known classes of anti­malarial drug, threatening the remarkable progress that has been made against the disease. HIV is increasingly resistant to first-line antiviral drugs. Every class of antibiotic is increasingly compromised by resistance, as are many antivirals, antiparasitic and antifungal drugs.

It could get worse: routine medical care, surgery, cancer treatment, organ transplants and industrialized agriculture would be impossible in their present form without antimicrobials. And the treatment of many infectious human and livestock diseases now relies on just one or two drugs.

Resistance has spread around the world. MRSA has spread between continents2, as have resistant strains of TB, malaria, HIV and pneumococci. Genes conferring resistance to β-lactams — antibiotics used against a broad range of infections, including E. coli and K. pneumoniae — have spread to bacterial populations worldwide, probably originating in the Indian subcontinent3. Numerous drug-resistant malaria strains have spread from southeast Asia to Africa.

Better surveillance is essential. But it will not provide solutions; many calls to action on antimicrobial resistance have been made over the past 20 years, but there has been too little progress. The WHO missed the opportunity to provide leadership on what is urgently needed to really make a difference.

What is required is committed and coordinated action on the root causes of resistance: the misuse of antimicrobials, the paucity of development of new drugs and the lack of alternatives. Guidelines must be implemented to improve the use of existing drugs; the scientific and business worlds need incentives and a better regulatory environment to develop new drugs and approaches, and those working in both the animal and human sectors need education and incentives to help them to change their ways.

We call for the creation of an organization similar to the Intergovernmental Panel on Climate Change (IPCC) to marshal evidence and catalyse policy across governments and stakeholders.

Although all kinds of microbes evolve resistance, resistant bacteria are currently the greatest cause for concern.It is no coincidence that the nations with the strictest policies on antibiotic prescription (Scandinavian countries and the Netherlands) have the lowest rates of resistance. But in most of the developed world, clinical use of antibiotics has not declined, despite frequent calls to curtail overuse. In developing countries with rising incomes, consumption is surging; sales of even relatively expensive antibiotics increased fivefold in India and tripled in Egypt in 2005–10 (see ‘A market for futility’). This growth is fuelled by unregulated, over-the-counter sales of antimicrobials of all kinds. 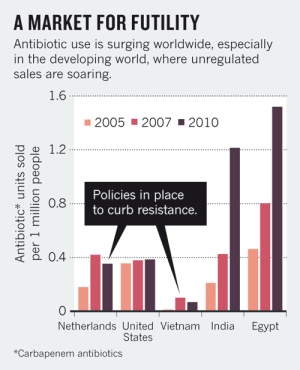 Mitigating resistance will require coordination across sectors. Physicians, pharmacists, veterinarians, patients and farmers all contribute to the overuse of antimicrobials. All have a part to play in using them more intelligently. However, changing practices in the hospital, clinic or farm is not easy. The onus is on countries that are major producers and consumers of antimicrobials — especially the United States and European nations, and increasingly India and China — to introduce policies that promote best practice.

Currently, national efforts are patchy and disconnected. The United Kingdom last year published a five-year strategic plan to combat resistance (see go.nature.com/ideq6t), although with no new money attached. Vietnam aims to combat resistance through its VINARES project5, but most countries have no such programmes. The United States is still debating how to reduce the use of growth promoters in animals. Regional initiatives such as the European Antimicrobial Resistance Surveillance Network are yet to be replicated elsewhere. Controls that do exist are often weakly implemented or are no more than voluntary guidelines.

Most of the antibiotics in use today, from penicillin to carbapenems, originated in soil. Long before they were used as medicines, soil microbes were producing antibiotics, and bacteria were evolving resistance to these natural compounds. This has been happening for perhaps billions of years6 on a massive scale: there are at least 50 tonnes of bacteria for every person on the planet7.

Humans became involved with the manufacture of antibiotics on an industrial scale only in the 1940s. Today, 20 tonnes of antibiotics are produced every hour, contributing to a global industry that is worth more than US$30 billion a year. We are now in a race against evolution; new antimicrobials are deployed and, often within a few years, resistance develops. Factory-produced antibiotics are presenting bacteria with a type of chemical attack that they have overcome many times before.

Between 1983 and 1992, 30 new antibiotics were approved by the US Food and Drug Administration. From 2003 to 2012, the number was just seven. Why? Because there are too few incentives and too many regulatory barriers for the commercial sector to invest what is needed for the development of new antimicrobials8. Drug development is risky, and antibiotics do not generate as much revenue as drugs for chronic conditions do. Drug companies find that research in other diseases is a better return on investment.

One key difference is that, for climate change, technologies exist to produce energy without burning fossil fuels, and investments and incentives will make them practical and affordable. Alternatives to antimicrobials — such as probiotics, prebiotics or phage therapy — are still, at best, experimental4. More research on alternatives is urgently needed, coupled with efforts by industry, academia and governments to market them in a scalable way.

There have also already been internationally agreed, evidence-based targets for cutting carbon dioxide emissions. There are no global targets for reducing antimicrobial use and no real understanding of how to set them. We do not even know what, if any, level of antimicrobial usage will be sustainable in the long term.

The threat of anthropogenic climate change led to the creation in 1988 of the IPCC. Despite its limitations, the panel is arguably the most successful attempt in history to empower scientific consensus to inform global policy and practice.

Another useful precedent is the Montreal Protocol on Substances that Deplete the Ozone Layer, the first universally ratified treaty in the history of the United Nations. Faced with clear data that the ozone layer, which protects Earth from ultraviolet radiation, was under threat, governments agreed on a timetable to phase out ozone-depleting chemicals. The protocol, which came into force in 1989, is considered the most successful global environmental treaty, and has led to the shrinking of the ozone hole.

We believe that similar global approaches should be attempted to address problems in public health. There is a need for a powerful panel to marshal the data to inform and encourage implementation of policies that will forestall the loss of effective drugs to resistance, and to promote and facilitate the development of alternatives — a panel akin to the IPCC, and the analogous Intergovernmental Science-Policy Platform on Biodiversity and Ecosystem Services founded in 2012. An intergovernmental panel on antimicrobial resistance (IPAMR) must have the same firm foundation on the best available science and potentially an even stronger mandate for action.

From the outset, the IPAMR needs to avoid simply restating the problem. It must move rapidly to an agenda that includes identifying key knowledge gaps and how to fill them; assessing viable short- and long-term solutions; evaluating barriers to implementation; and setting out road maps for sustainable control of disease-causing microbes. It could, for example, support studies to investigate dosing regimes that stall resistance, coordinate incentives for developing new types of antimicrobial and set targets for prescriptions and animal use.

To have any chance of achieving these objectives, the IPAMR must be trusted and free of vested interests. It will need to involve a broad range of experts, encompassing clinical and veterinary medicine, epidemiology, microbiology, pharmacology, health economics, international law and social science. It will need technical, financial, industrial and political support from governments and agencies including the WHO, the World Organisation for Animal Health, the World Trade Organization and the United Nations, as well as from representatives of producers and consumers of antimicrobial drugs. Above all, it will need strong, independent leadership.

Creating an effective IPAMR will be a huge undertaking, but the successful global campaign to eradicate smallpox, led by the WHO, demonstrates that a coordinated, international response to a public-health threat can work. The attempt must be made — otherwise, the massive health gains made possible by antimicrobial drugs will be lost.