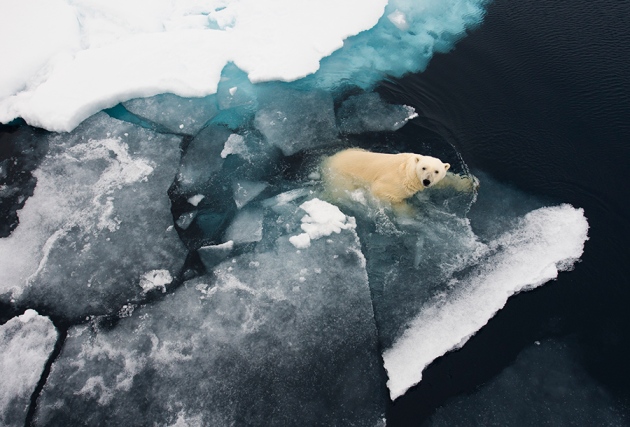 Polar bears’ metabolism does not slow very much during the summer months when sea ice melts and food becomes scarce, according to a study1 published today (16 July) in Science. With the Arctic warming faster than the global average, the finding does not bode well for polar bears (Ursus maritimus), who use the ice as a hunting ground.

The Arctic ice is melting earlier each summer and freezing later each winter, limiting the animals’ chances to catch seals. With no way to save energy, polar bears are unlikely to survive the continued sea-ice loss2 caused by rising temperatures, says Merav Ben-David, a wildlife ecologist at the University of Wyoming in Laramie and a co-author of the study.

The research suggests that the bears do not use a strategy known as walking hibernation — a state of lowered activity and slowed metabolism — to survive summer fasts as some had suspected3. Instead, they show a smaller decrease in their metabolic rate, similar to that seen in any mammal with a restricted diet.

Ben-David and her colleagues discovered this by affixing tracking collars and activity monitors to more than two dozen polar bears from a population in the Beaufort Sea, north of Alaska. They also implanted probes into 17 individuals to measure body temperature, which is tied to the animals’ metabolic rate.

They tracked the bears’ activity and temperature during 2008 and 2009, and found that the measurements were roughly the same for bears that moved off the ice to shore and those that followed the retreating ice farther north. A small reduction in body temperature — about 0.7 ºC in those on ice — was much too small to correspond to walking hibernation, but it did align with animals that are fasting.

“It’s rare to get this kind of physiological measurement made on big, wild carnivores,” says Terrie Williams, a biologist at the University of California, Santa Cruz. “That’s the thing that’s remarkable.”

A bear of a challenge

Tackling those logistical challenges took a coordinated effort between many agencies and organizations, including research and on-the-ground support from the US Geological Survey and the US Fish and Wildlife Service (FWS). The mission to tag the animals used two helicopters and an ice-breaking vessel; recapturing all of the bears to recover the temperature loggers took 36 days at sea.

Polar bears were designated a threatened species in 2008, but Ben-David says that the move was mostly symbolic. “In reality, we cannot do much under the Endangered Species Act to save polar bears,” she says. “What we need to save polar bears is global action to reduce climate change.”

On 6 July, the FWS released a draft plan to boost the polar-bear population, which estimates put between 20,000 and 25,000 in 2008. The plan points to reductions in atmospheric greenhouse gases as the most important step to take for species conservation.