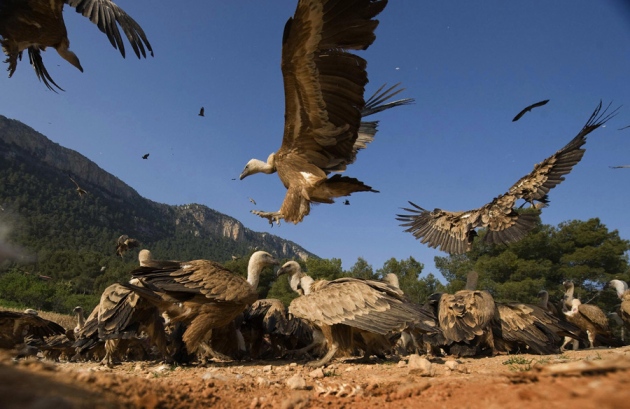 Vultures feeding on dead rabbits near Valderrobres, in eastern Spain.

A huge decline in vulture numbers in India has been blamed on widespread use of an anti-inflammatory drug in cattle. Now Europe’s vultures could be headed the same way as India's devastated population, with the first report of a death that is definitively linked to a similar drug.

India's vultures have suffered catastrophic declines since the 1990s, with populations of certain species such as Gyps indicus falling by more than 95%, and considered critically endangered. Scientists have blamed the drug diclofenac, which vets give to farm animals to treat conditions ranging from pneumonia to arthritis — but which can be deadly to vultures that feed on their carcasses as they are unusually sensitive to the compound.

Last week, a paper in Conservation Biology1 reported that a Eurasian griffon vulture (Gyps fulvus) found dead in Spain in 2012 had suffered from severe visceral gout — which in Indian vultures is a classic sign of diclofenac poisoning. Laboratory tests showed that liver and kidney samples contained high levels of flunixin, another drug in the same class as diclofenac, known as non-steroidal anti-inflammatory drugs, or NSAIDs.

This is the first case of a wild vulture being felled by an NSAID outside Asia, according to Mark Taggart, lead author of the paper and a pollutants researcher at the University of the Highlands and Islands in Thurso, UK. It is also the first instance of a bird death from an NSAID other than diclofenac, he adds.

The researchers also say that this corpse may be the tip of the iceberg in terms of vulture deaths, and stress it was only found due to the transparency of the local government in Andalusia and ongoing monitoring efforts on the health of the local vulture population.

“What is needed now is further research to safety test all NSAIDs on scavenging raptors,” says Taggart. 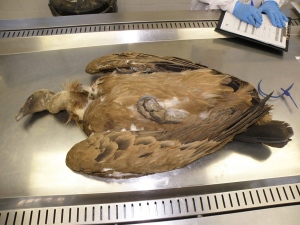 The Eurasian griffon vulture found dead in Spain in 2012.

Researchers have been warning of the risks posed to Spanish vultures by diclofenac2, 3. And Antoni Margalida, a conservation biologist at the University of Bern in Switzerland who researches scavenging birds, agrees that the latest paper shows that wild animals are indeed eating carrion from medicated animals.

Margalida points out that other threatened species also feed on carrion, such as eagles and kites. What was once a risk is now “a demonstrated concern that requires an urgent response by administrations to ban as soon as possible the use of diclofenac”, says Margalida.

The European Medicines Agency is currently considering the threat posed by diclofenac to Europe’s vultures, and is due to produce a decision by the end of November. It could ban use of the drug in livestock, or recommend restrictions on its use or on how carcasses are disposed of. Products containing diclofenac were approved for veterinary use in livestock in Spain only last year, and it is not clear how widely they are being used. Estimates from the VCF suggest that if diclofenac use grows, the number of contaminated carcasses could quickly reach the levels that caused the near disappearance of Indian vultures.

José Tavares, the director of the VCF, says that the drug needs to be banned because of the practical and cost issues involved with controlling wildlife access to potentially toxic carcasses. Some of the animals are in remote areas, where they can lie unnoticed. And in parts of Spain, carcasses are left in the open for wild animals to eat, at sites called muladares.

“We are now asking the European Union to ban diclofenac as a first step,” Tavares says. Europe should then consider banning other potentially harmful drugs, including the flunixin that killed the Spanish bird. Failure to act could have “a significant impact on European vultures”, he warns.

Some researchers suggest switching to an alternative drug — meloxicam — which treats the same problems as diclofenac, but is less toxic to vultures. They also express concern that allowing diclofenac use to continue in Europe could undermine efforts to limit access to it in other parts of the world. “Other countries would not have any reason to ban the drug,” says Tavares. And those that already have “may reopen the question and say, 'Why do we have to ban the drug here if in Europe they have approved it?'.”