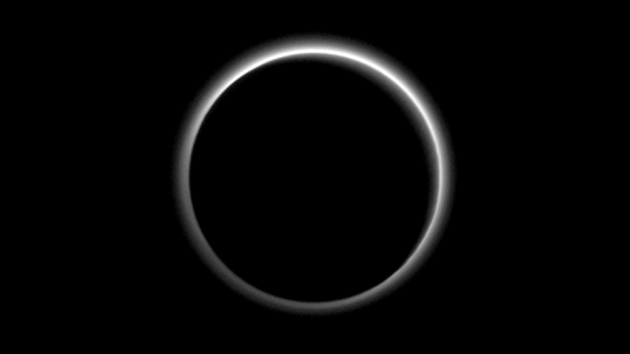 The New Horizons craft photographed Pluto’s atmosphere, backlit by the Sun, as the probe sailed away from the dwarf planet in mid-July.

NASA’s New Horizons spacecraft solved many mysteries about Pluto when it flew past the dwarf planet in July. But as mission controllers prepare to steer the probe to its next rendezvous, planetary scientists are working to understand a puzzling result: an atmospheric pressure at Pluto’s surface that is much lower than indicated by measurements obtained from Earth.

Some have suggested that Pluto’s atmospheric pressure is dropping as the dwarf planet’s orbit carries it farther from the Sun and gases freeze out and fall to the surface as snow. But the most recent data taken from Earth suggest no such dramatic transformation. “I feel pretty secure that Pluto isn’t starting to freeze out,” says Eliot Young, a planetary scientist at the Southwest Research Institute (SwRI) in Boulder, Colorado.

On 29 June, a few weeks before the fly-by, Young organized astronomers across New Zealand and Australia to watch Pluto as it passed in front of a distant star. Tracking how the star’s light faded during the passage provided information on how much gas is in Pluto’s atmosphere. Using the same method, planetary scientists have seen the atmosphere grow denser since 1988 — and analysis of the 29 June observations shows that the trend remains intact. Young calculates that the current atmospheric pressure at Pluto’s surface is 22 microbars (0.022 pascals), or 22-millionths the pressure at sea level on Earth.

But on 14 July, New Horizons measured Pluto’s surface pressure as much lower than that ­— just 5 microbars. “How we link the two, we’re still working on,” says Cathy Olkin, a deputy project scientist for New Horizons at SwRI.

Part of the discrepancy between the spacecraft’s observation and past estimates could be due to the indirect way that astronomers derive the value from Earth-based observations. These studies measure pressure some 50–75 kilo­metres above the dwarf planet’s surface, and researchers use assumptions about the atmosphere’s structure to calculate what that number translates to at the ground.

“We may be looking at the first test of these models, not an atmospheric collapse.”

By contrast, New Horizons measured surface pressure directly by determining how strongly radio waves, beamed from antennas on Earth, bent as they passed through Pluto’s atmosphere and arrived at the spacecraft on the far side of the dwarf planet.

The next challenge is to figure out which of several competing models that describe Pluto’s atmosphere can best reconcile the Earth-based measurements and what New Horizons measured at the surface.

“We may be looking at the first test of these models, not an atmospheric collapse or some spectacularly freaky physics,” says Ivan Linscott, a physicist at Stanford University in California and co-leader of the New Horizons radio measurement. “The jury’s still out.”

Clues may yet come from New Horizons. About 95% of the data collected in its Pluto fly-by, including much of the information from the radio measurement, is still on board. Slow transmission speeds mean that the team will have to wait months for the rest of it to arrive. The transmission of images, which has been on pause since soon after the 14 July fly-by, will resume on 5 September.

And in late October, mission controllers will ignite the spacecraft’s engines in a series of burns to set it on course for its next destination: an object called 2014 MU69, which is about 45 kilometres across and lies in the Kuiper belt, a collection of small bodies orbiting beyond Neptune. New Horizons is set to pass within about 12,000 kilometres of the object on New Year’s Day 2019.