This intriguing geology is revealed by the latest images from NASA’s New Horizons mission, captured during its historic trip past Pluto on 14 July and released on 15 July.

Perhaps most surprising is how different Pluto and Charon are from one another, and how geologically active they seem. Pluto’s frosty surface is wildly variable, with broad bright swathes, sprawling dark patches and terrain that appears alternately smooth and battered. Charon is more muted, with long canyons girdling its middle. Yet its features still intrigue — among them a dark reddish-brown polar cap that team scientists have dubbed Mordor.

“We have just been thrilled all morning,” says deputy project scientist Cathy Olkin, a planetary researcher at the Southwest Research Institute in Boulder, Colorado. “Pluto did not disappoint, and Charon did not disappoint either.”

The ice mountains rise, ruggedly, in the first detailed image of Pluto’s surface. That they tower so high suggests that the frosts coating Pluto’s surface are very thin, and that the mountains rest on stronger ice beneath, says team member Kelsi Singer of the Southwest Research Institute, who has studied the origin of nitrogen ices on the dwarf planet1. 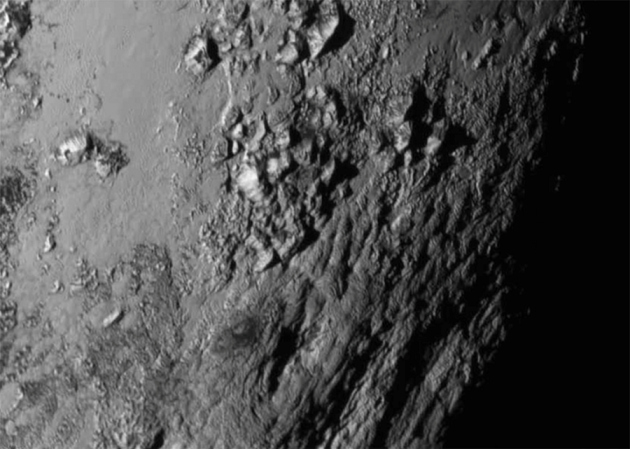 Ice mountains near Pluto’s equator rise up to 3,500 metres high.

Shockingly, the image (above) shows no impact craters, which tend to accumulate on planetary surfaces as meteorites strike. Radioactive heating from within Pluto may drive geological activity and resurface this region with fresh material, says team member Veronica Bray, a planetary scientist at the University of Arizona in Tucson.

Also striking is the sharp boundary between dark, cratered terrain and a bright heart-shaped feature informally dubbed Tombaugh Regio, after Pluto discoverer Clyde Tombaugh. Before the spacecraft got to Pluto, scientists had used the Hubble Space Telescope to map patches of light and dark, but had been able to capture only blurry images. The patches now appear as the bright heart and several dark areas, including some that seem to wrap around the equator in a near-complete band.

“Pluto is a real place, with incredibly complex geology,” says Ellen Stofan, NASA’s chief scientist. “It is beautiful and it is strange.”

Geologists had few expectations going into the encounter, because very little was known about Pluto2. The darker terrain is home to several impact craters, suggesting that they are more ancient than the bright areas. In places, the craters are heavily or partially worn away, so some as-yet-unknown geological process is thought to be eroding or burying them. In others they seem to have bright material at their centres, perhaps exposing underlying material.

Pluto’s surface is coated in several types of ice, including frozen nitrogen, methane and carbon monoxide. Ultraviolet radiation from the Sun, along with cosmic rays, bombards the surface and triggers chemical reactions that produce complex hydrocarbons, which appear dark in the images. The ice may accelerate the dichotomy between bright and dark; bright areas are colder and attract more ice to condense there, whereas darker areas are warmer and melt away more readily. 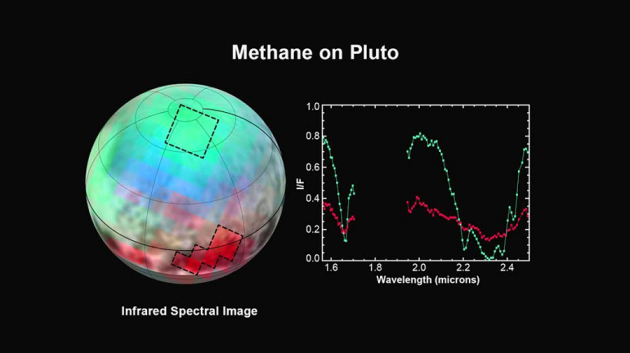 Infrared spectra from New Horizons’ ‘Ralph’ imager show that there are different forms of methane ice on Pluto’s surface.

Still to come are stereo data that will reveal the surface’s topography in 3D, showing which parts are bumps and which are troughs. Also trickling back to Earth are data on the chemistry of each patch, including infrared spectra.

But even the early data show more and more layers of complexity. The left and right sides of the ‘heart’, for instance, seem to be coloured slightly differently, suggesting that they are made of different types of material.

The science team has given areas provisional names linked to the underworld in literature and mythology. The head of the sprawling dark feature once called the whale, for instance, has been dubbed Cthulhu, after an octopus-like deity from the writings of US author H. P. Lovecraft.

Pluto and Charon orbit facing one another, in a mutual dance that rotates once every 6.4 Earth days. This binary system probably formed when a large object slammed into a proto-Pluto, in the early days of the Solar System. One hypothesis holds that tidal forces would have stressed Charon and broken its surface into long fracture patterns3. Alyssa Rhoden, a planetary scientist at Arizona State University in Tempe, plans to map the fractures on Charon and see whether they match predictions about internal stresses. “There’s all kinds of crazy stuff on here,” she says. “It's more than I would have guessed.”

One big surprise on Charon is the ‘Mordor’ polar cap, whose reddish-brown colour could come from ices altered by cosmic radiation. One possibility is that part of Pluto’s wispy atmosphere drifts over to Charon, where it is gravitationally captured and freezes at the coldest spots on the surface. Another idea is that Charon might somehow be releasing volatile compounds from inside itself. 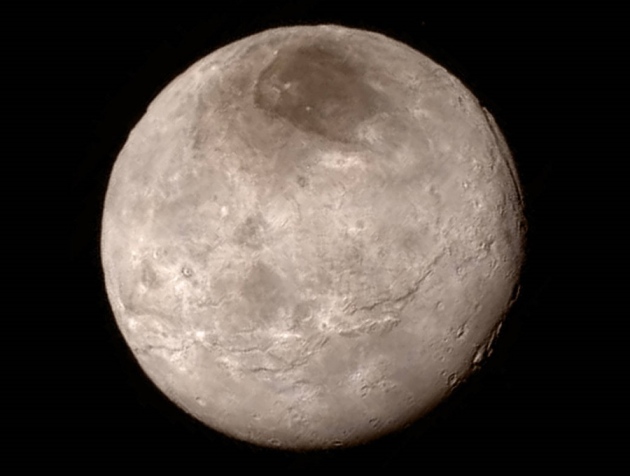 Charon’s dark polar cap may be coloured by material that escapes from Pluto’s atmosphere.

Charon also has fresh-looking impact craters and huge chasms, including a series of troughs and cliffs that extend for nearly 1,000 kilometres. Because it is more battered than Pluto, Charon “may be a better witness plate” for understanding how the whole system formed, Olkin says.

Before the fly-by, scientists had expected Pluto to look something like Neptune’s moon Triton, an icy object thought to have been captured by Neptune’s gravity. Now those theories are going out of the window, because Pluto is much more variable and ancient than Triton ever seemed. “It really is a lot more interesting than Triton,” says team member Bonnie Buratti, a planetary scientist at NASA’s Jet Propulsion Laboratory in Pasadena, California.

New Horizons will see only one hemisphere of Pluto in detail, but mission scientists are happy with their data. The side with the ‘heart’ was chosen because it looked brightest when seen from Earth. Two new high-resolution frames, bordering the ice-mountains region, are set to be released to the public on 17 July.

The spacecraft whizzed past Pluto at a distance of 12,500 kilometres just before 7:50 a.m. Eastern daylight time on 14 July. The phone-home signal, indicating that it had passed safely, arrived as a burst of 1s and 0s just after 8:52 p.m. that night.

Image downlinks continue, although it will take 16 months for the full data set to return to Earth. In the meantime, the four disciplinary groups of the science team meet at 8 a.m. every day to go through their new analyses.

“It's like a birthday present every day,” Buratti says.