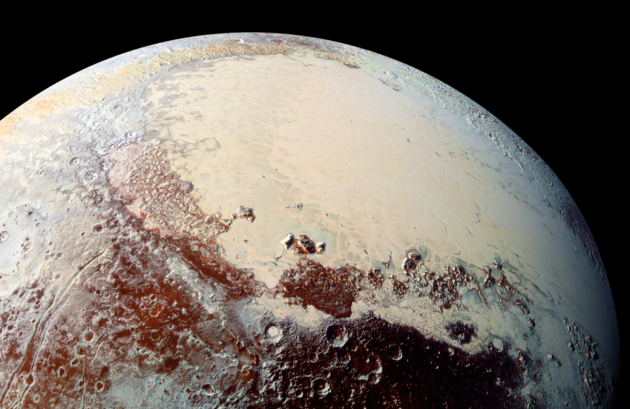 The New Horizons mission captured this close-up view of the vast plains on Pluto known as Sputnik Planum.

Take a pinch of Mars, a sprinkle of Saturn’s moon Iapetus and a dash of Neptune’s moon Triton — and the recipe will yield something like Pluto.

The first published scientific findings1 from NASA’s New Horizons mission, which flew past Pluto in July, confirm that the dwarf planet does not resemble any other single world in the Solar System. Instead, its wildly varying terrain is a crazy quilt of geological patterns and textures — copied, pasted and tweaked from other planets and moons.

“It’s like a little bit of everything,” says Carly Howett, a planetary scientist and New Horizons team member at the Southwest Research Institute in Boulder, Colorado.

Like Mars, Pluto has volatile compounds that cycle between freezing onto the ground and sublimating back into the atmosphere. Like Iapetus, it has stunningly bright terrain juxtaposed with dark areas. And like Triton, it seems to have streaks made by wind marring its icy surface.

Pluto’s geological activity is driven both by heat leaking from radioactive elements in its interior — a remnant of its birth more than 4 billion years ago — and by the volatile compounds that flit between its surface and its atmosphere. As Pluto moves away from the Sun in its 248-year elliptical orbit, temperatures plummet and these compounds freeze out of the atmosphere and fall onto the surface as frost. When Pluto warms up again, methane, nitrogen, carbon monoxide and other chemicals transform directly from ice on the surface into atmospheric gases.

High-resolution pictures from New Horizons’ cameras show the effects of this seasonal process. The broad, bright plains known as Sputnik Planum seem to be covered by nitrogen glaciers; these flow gloppily, and quickly erase craters made by crashing asteroids. “Punching a hole in jello springs to mind,” says Howett. “Everything suggests this ice is exceptionally soft” — making it unique in the Solar System.

Next to the light-coloured Sputnik Planum lies the dark, cratered, ancient-looking Cthulhu region. The craters may be up to 4 billion years old, from a time when asteroids were heavily bombarding the early Solar System, says team member William McKinnon, a planetary scientist at Washington University in St. Louis, Missouri.

The dark coating may be methane that has gone through chemical processing in the atmosphere, says Jeff Moore, a team member and planetary scientist at NASA’s Ames Research Center in Moffett Field, California. Winds could transport it towards the equator, where it would settle out, much as dusty winds blowing across Mars deposit sand seas.

Other areas on Pluto seem to be a mishmash of material that is neither bright like Sputnik Planum nor dark like Cthulhu. “There’s a lot of stuff on Pluto that doesn’t look a whole lot like anything else we’ve ever seen,” says McKinnon. That includes ‘snakeskin’ terrain that may have been sharpened into bladelike ridges over time as material froze and then sublimated away.

Many of the general themes of Pluto discoveries have already been revealed in New Horizons press briefings, but today’s paper, published in Science, is the first formal record of the mission’s scientific results. It includes details as seemingly mundane as Pluto’s size — 2,374 kilometres across, plus or minus 8 kilometres — that other scientists can use to refine their understanding of properties such as heat flow within the dwarf planet.

Mission scientists also found that Pluto is as close to perfectly spherical as New Horizons’ instruments could possibly measure. This suggests that during its early development, the dwarf planet was warm, squishy and mouldable enough to avoid locking into a deformed shape.

Although much of the data from New Horizons still remains to be radioed back, “everything is coming together”, says Moore. “We have a much better set of hypotheses for many places on Pluto than we had two months ago.”