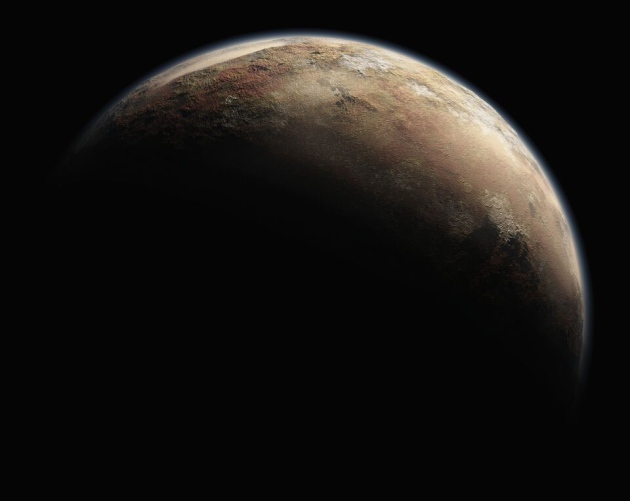 If all goes well, the New Horizons spacecraft will swing by Pluto and its moon Charon on 14 July.

Some 4.7 billion kilometres from Earth, the New Horizons spacecraft is heading for a historic rendezvous with Pluto. To achieve this, it will need to hit a very small target: an imaginary rectangle in space measuring just 100 by 150 kilometres.

Mission navigators need to put New Horizons precisely in that area to ensure that the spacecraft can make all planned science observations during its 14 July fly-by of Pluto — the first ever of that distant dwarf planet.

For now, the spacecraft is on target. But getting to Pluto is one of the hardest tasks in interplanetary navigation, and crucial decisions will be made in the next week and a half. The last chance to change the spacecraft’s flight path comes on 4 July.

Because astronomers discovered the dwarf planet in 1930, they have seen only part of its 248-year path around the Sun, and they don’t know exactly where Pluto is. And New Horizons is so far from Earth that it takes 9 hours to send and receive a signal, making the spacecraft hard to direct in real time.

“Everything is pushed to the extreme,” says Bobby Williams, an engineer at KinetX Aerospace in Simi Valley, California, who heads the mission’s navigation team.

New Horizons must slip by just 12,500 kilometres above Pluto, a distance dictated by the spacecraft’s speed — nearly 14 kilometres per second — and how quickly it can rotate its instruments to look at the surface below. It must accomplish this manoeuvre even as Pluto dances a complex shimmy through space, pulled by the gravitational tug of its largest moon, Charon. After that closest approach, New Horizons must continue on a precise path into the shadows of both Pluto and Charon, for its sole chance to look back and explore atmospheres on those worlds.

There is only one shot. “It’s not like an orbiter, where if you miss a day’s science you can make it up later,” says Williams.

To find its target, New Horizons takes daily pictures of Pluto with its long-distance camera. As the dwarf planet gets bigger in the field of view, navigators can more accurately calculate its position against those of background stars. But they cannot tell how far away Pluto is.

“You can’t tell whether it’s small and close or big and far,” says Fran Bagenal, a space physicist and mission co-investigator at the University of Colorado Boulder. “It’s a really interesting problem that we’ve never had at any other planet.”

Only in the last few days before fly-by will the spacecraft be close enough to Pluto to spot it moving side-to-side against the background stars, revealing its distance. And by that point, mission engineers will not be able to make course adjustments.

If New Horizons turns out to be a little closer to or farther away from Pluto than engineers had thought, they will tell the spacecraft to start making scientific observations a little sooner or later than otherwise planned. That way they can be sure to get Pluto in the images and not just swathes of empty space.

“We’re too late to do any manoeuvres to change the trajectory,” says William Owen, the mission’s lead optical navigation engineer at the Jet Propulsion Laboratory (JPL) in Pasadena, California. “All we can do is figure out when the close approach to Pluto really is compared to when it was supposed to be, and take the time difference and apply that.”

The situation is so complex that New Horizons has, unusually, two navigation teams. KinetX Aerospace is the primary one in charge of getting the spacecraft to where it needs to be. But several years ago, NASA added an independent navigation team from JPL.

“It’s a little extra incentive to sharpen your pencils and do well,” says Mark Holdridge, the mission encounter manager at the Johns Hopkins University Applied Physics Laboratory in Laurel, Maryland, which manages New Horizons. If the two approaches start to diverge as New Horizons approaches Pluto, NASA will decide whose solution to use.

Another navigational dilemma will arise if mission scientists discover dust or rings in the Pluto system that could hit the spacecraft and knock it out of commission. So far they have found nothing. But if they see something ominous, the probe may have to divert onto one of several alternate trajectories. There are only two more chances to burn the spacecraft’s engines and set it on another course: on 30 June and 4 July.

Tension rises in the last few days before a fly-by. When Voyager 1 passed Saturn in 1980, Owen says, the spacecraft seemed well on track until about a week and a half out. Navigators did not realize it at the time, but Voyager had performed a roll manoeuvre that added extra thrust in directions that they had not accounted for.

Calculations on where Voyager was headed were plotted each day on graph paper posted on the wall at JPL. Soon the dots left the centre of the paper and began to wander onto the wall and then overhead. “There were dots on the ceiling for years afterward,” Owen says.