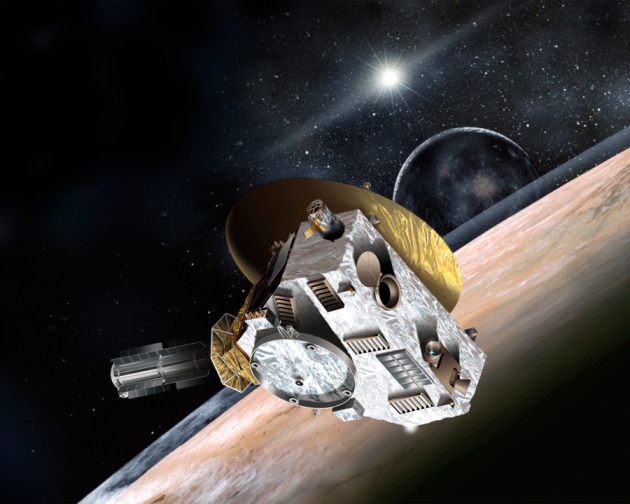 The New Horizons probe (artist’s impression) is set to pass Pluto and its moon Charon in July next year.

Nearly 4.3 billion kilometres from Earth, and most of the way to Pluto, NASA’s New Horizons spacecraft is in danger of missing out on half of its mission. Project managers face a looming deadline to identify an icy object in the outer Solar System for the probe to fly by after it passes Pluto.

A visit to a Kuiper belt object, or KBO, was always meant to be a key part of New Horizons’ US$700-million journey, which began in 2006. But there is only a slim chance that astronomers will find a suitable KBO with their current strategy of using ground-based telescopes — and securing time on the orbiting Hubble Space Telescope is far from guaranteed.

New Horizons will fly past Pluto in July 2015. Soon afterwards, it must fire its engines and set itself on course to fly past a selected KBO. Project scientists must identify a KBO in the next several months if they are to determine the necessary trajectory well enough for New Horizons to aim accurately and meet its target.

“They’re running out of time,” says Mark Sykes, director of the Planetary Science Institute in Tucson, Arizona, who is not involved in the mission. “We’re not just talking about science being lost — we’re talking about getting return on our investment.”

New Horizons scientists have asked for 160 orbits’ worth of observing time on the hugely oversubscribed Hubble. It is a rare request for a NASA mission already in operation. The committee that allocates Hubble time will make a decision by 13 June.

The two targets of New Horizons — Pluto and a KBO — each promise different rewards. “Two different scientific communities are getting excited about it,” says Will Grundy, mission co-investigator at the Lowell Observatory in Flagstaff, Arizona. The Pluto fly-by will be the first close-up glimpse of this geologically active world and its moons. The KBO visit, 2–3 years later (see ‘Far horizons’), would be the best look yet at one of these primordial icy bodies — time capsules from the early days of the Solar System. 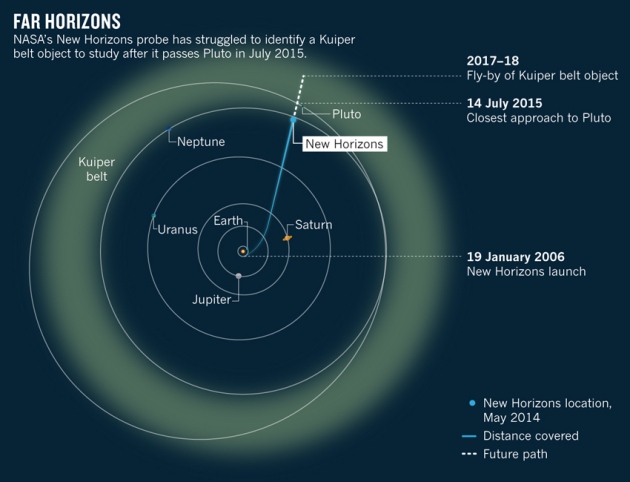 In theory, project scientists should have identified a suitable KBO long ago. But they postponed their main search until 2011, waiting for all the possible KBO targets to begin converging on a narrow cone of space that New Horizons should be able to reach after its Pluto encounter. Starting to look for them before 2011 would have been impossible, says Grundy, because they would have been spread over too much of the sky.

Now that the hunt for KBOs is on, the New Horizons researchers have mainly been using the 8.2-metre Subaru Telescope in Hawaii and the 6.5-metre Magellan Telescopes in Chile. They have found about 50 new KBOs; none is close enough for New Horizons to reach.

Part of the problem is that the search area is in the Galactic Plane, where most of the Milky Way’s stars are. The bright stars tend to outshine the light coming from the faint KBOs, and the crowded field of view means that the discovery rate depends strongly on observing conditions. Bad weather and poor-quality observation on many nights has ruined much of the search.

Early on, the team also overestimated the number of KBOs that it would find. In the past couple of years, astronomers have discovered that there are fewer dim KBOs than was extrapolated on the basis of the number of bright ones. “There just aren’t as many faint ones,” says Grundy — and faint, faraway KBOs are what New Horizons must detect.

For a mission that has been carefully planned for many years, the failure to find a KBO target is striking. But Sykes is not alarmed. “That should have been in the calculus, but it really wouldn’t have changed their ground-based campaign,” he says.

The team has another eight nights with Subaru in late June and July, and hopes to win some more time in August. It has also applied for extra observing time with Magellan in October. Even if conditions are near perfect, the chances of snaring a KBO from the ground this year are less than 40%. With the requested Hubble time, those chances soar to greater than 90%.

Without Hubble, it might still be possible to identify a KBO target from the ground early next year. But that would complicate the mission, because New Horizons would have to wait for longer after visiting Pluto to fire its engines. In that case, the spacecraft would need to execute a sharper turn than team scientists would like to reach the correct trajectory.

In the worst-case scenario, New Horizons would be forced to observe a KBO from far away. Several possible long-distance targets have already been spotted (S. D. Benecchi et al. Icarus http://doi.org/ssn; 2014). Even with its puny 21-centimetre telescope, New Horizons would get a better glimpse of a distant KBO than the 2.4-metre Hubble can manage from an Earth orbit.

Not that the team has yet given up hope of a close KBO target. “If we can find one,” says Grundy, “we will happily take it.”