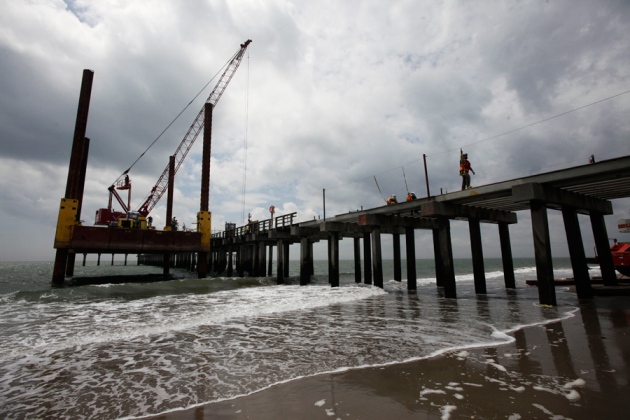 New York’s hurricane-battered Steeplechase Pier will be rebuilt in plastic and concrete.

Ishmael Tirado watches as his fellow construction workers rebuild the Steeplechase Pier, a central feature of New York’s iconic Coney Island boardwalk. Planks of tropical ipê wood that were torn asunder by last year’s Hurricane Sandy lie in grey stacks behind him, ready to be scrapped or recycled, but fresh boards are tellingly absent. When the pier reopens this summer, visitors will encounter a shiny expanse of recycled plastic jutting out to sea on a platform of steel-reinforced concrete. “I think it’s a good idea,” Tirado says. “It’s more durable, and we are saving trees.”

Michael Bloomberg, New York’s mayor, would probably agree. He promised in 2008 to reduce the city’s dependence on tropical hardwoods such as ipê (pronounced ‘ee-pay’), and the city has since shifted towards concrete and plastic building materials. Many municipalities and consumers are making a similar choice as they build and maintain outdoor structures. But some researchers fear that a knee-jerk shift away from tropical timber could backfire on the environment.

“If it’s sustainable, the timber trade is generally a good thing,” says Duncan Brack, an environ­mental-policy analyst at Chatham House, a think tank in London. “There’s a real danger of pushing people towards things with higher environmental impacts.”

The scant data available suggest that ‘plastic wood’ — typically a composite of waste wood and plastic — exacts a higher climate-change cost than natural wood, which has the benefit of pulling carbon dioxide out of the atmosphere as it grows. One 2011 study, funded by the timber industry but independently peer-reviewed, found that the greenhouse-gas emissions from the manufacture of plastic wood are nearly three times higher than those from the production of chemically treated cedar1.

Data from the Consortium for Research on Renewable Industrial Materials, a public–private partnership based at the University of Washington in Seattle, suggest that emissions from plastic-wood manufacture are 45–330% higher than those of redwood production, depending on whether the plastic is recycled and the extent to which it is supplemented with woody material. Yet plastic wood — which is often marketed as eco-friendly and low-maintenance — is growing in popularity. In the United States, it accounts for around 10% of the market for decking, according to the Freedonia Group, a business consultancy based in Cleveland, Ohio (see ‘Timber trade’).

The shift has also been driven by supply. In New York, the decision to use more concrete and plastic came after officials concluded that there was no natural timber comparable to ipê — which is prized for its strength and durability — available in sufficient quantity to meet the city’s needs. Although the upfront building costs are higher, the assumption is that plastics and concrete last decades with little or no maintenance. 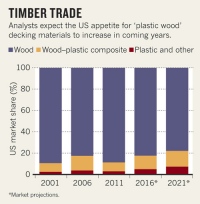 But the evidence for plastic timber’s durability is thin, in part because the industry arose only about two decades ago, says Jim Bowyer, a wood scientist at Dovetail Partners, a non-profit environmental consultancy based in Minneapolis, Minnesota. The first generation of plastic timber had problems with sagging and rot; newer products are better, but their long-term performance is hard to predict. “I know of one lab that has gotten mushrooms to grow on it,” Bowyer says. And without solid data on the lifetimes of different types of plastic timber, it is difficult to assess their environmental impacts, he adds.

Information about tropical-timber production is incomplete but suggests that the industry has an outsize environmental impact. According to the International Tropical Timber Organization, tropical countries supply about 10% of the world’s industrial wood, much of it from plantations.

But of the 400 million hectares (more than half of the world’s total) of tropical forest used for timber production today, less than 8% is sustainably managed. In many countries, illegal logging still accounts for much of the production, and many roads built legitimately by logging companies become arteries for illegal agricultural development. As such, logging often serves as a precursor to large-scale deforestation.

The simple solution is to avoid tropical wood, but that undercuts the market for timber that is sustainably produced, says Doug Boucher, head of the tropical-forestry programme for the Union of Concerned Scientists in Cambridge, Massachusetts. “This kind of quick and relatively unsophisticated response basically hurts tropical countries, at the expense of the developed world,” he says.

Industry and governments have taken steps to improve the market for sustainable tropical wood. The Forest Stewardship Council was launched in 1993 to create an independent certification for sustainably produced timber. More recently, many countries have banned the importation of illegally produced timber. The United States instituted such a ban in 2008. Europe this year went a step further by implementing regulations requiring companies that import wood to establish plans to ensure that the imports are legal. The United Kingdom requires all government-procured wood to be certified as sustainable.

The impact of these initiatives is not yet clear, but there are signs of progress. A 2010 study by Chatham House found that illegal logging had dropped by nearly 25% over the preceding decade, as enforcement efforts increased in tropical countries2. But corruption remains a global problem. Many illegal timber exports are going to China, where they are blended into the larger industrial supply chain.

The response to the UK approach suggests a way forward: the law has prompted many major importers in that country to certify the sustainability of their entire supply chains. As much as 80% of the wood entering the United Kingdom now comes with such assurances, says Brack, and the policy may be shaping broader practices. “The UK government is a big enough consumer of things like office furniture, paper and timber for construction that it has quite a large knock-on effect on the rest of the market,” he says.

Broad numbers aside, a question facing many governments and consumers is whether ipê in particular is being managed sustainably. Some ipê is certified by organizations such as the Forest Stewardship Council, but the overall production data are uncertain. “Is the use of ipê sustainable? No one really knows,” Bowyer says. “We are kind of operating in the dark.”

At Coney Island, many residents are fighting to protect the signature wooden boardwalk, and the city has acknowledged the historical significance of natural wood in some locations. On a recent weekend, construction crews were busy replacing small sections of boardwalk near the Steeplechase Pier — with fresh ipê.