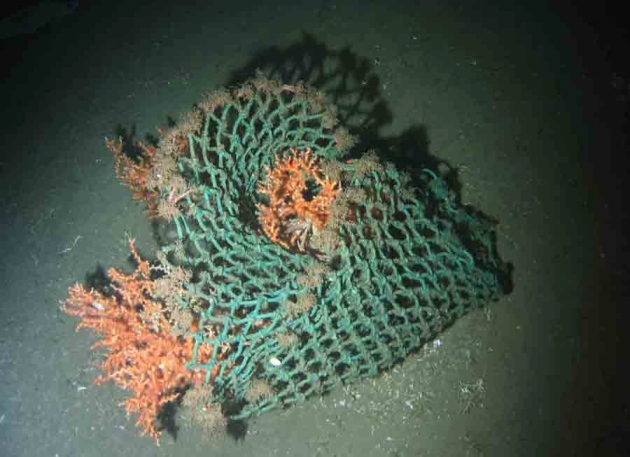 Litter such as this net — found entangled in a coral off the Scottish coast in a survey published earlier this year3 — is only the most visible part of the waste that accumulates at the bottom of the sea.

Billions of tiny plastic fragments are littering each square kilometre of the deep sea, an analysis of sea-floor sediments suggests1. Although the study sampled a small number of sites, the locations ranged from the subpolar Atlantic to the Indian Ocean, enabling researchers to design future studies that could determine where much of the plastic manufactured by humans ends up.

Plastic waste has long been recognized as a problem for the oceans: it pollutes beaches; accumulates in floating, nation-sized 'garbage patches'; and is consumed by seabirds, fish and other creatures. In a study published last week2, scientists estimated that more than 250,000 tonnes of plastic litter the ocean’s surface.

Yet that is only a minuscule fraction of the plastic produced each year, says Richard Thompson, a marine biologist at Plymouth University, UK. Slightly less than half of the material ends up recycled or in landfills, according to some studies, and much of the rest goes 'missing', he notes (see 'Fate of ocean plastic remains a mystery').

In the latest study, published in Royal Society Open Science1, Thompson and his colleagues scrutinized samples of sediment and coral retrieved from 16 sites in the Mediterranean Sea, the North Atlantic Ocean and southwestern Indian Ocean. Each of the dozen sediment samples contained colourful fibre fragments around 2–3 millimetres in length and 0.1 mm in diameter (about the thickness of a human hair), says Thompson. The team tallied, on average, more than 13 bits of fibre per 50 millilitres of sediment (or about 4 bits per tablespoon).

All four coral samples also carried synthetic fibres, but it is not clear how the microplastics would have become attached to the creatures, says Lucy Woodall, a marine biologist at the Natural History Museum in London and first author on the paper. She notes, however, that it seems that the current-wafted fragments became stuck to the outside of the mucus-covered animals rather than being consumed by them.

Extrapolating from the Indian Ocean samples, each square kilometre of sea floor in that region could hold 4 billion bits of fibre, the researchers estimate. Because every sample the team analysed included such fragments, the contaminants are likely ubiquitous in the deep sea worldwide, the researchers contend. “The deep sea floor could be the ultimate resting ground for the products of our disposable society,” says Thompson.

Almost 57% of the fibre fragments were made of rayon (a synthetic material made mostly of wood pulp), and more than half of the rest were polyester. Potential sources for such synthetic materials are numerous, and include ropes, fishing lines, clothing and even cigarette filters.

The team’s results are “a big step forward” in understanding where some of the world's plastic ends up, says Kara Lavender Law, a physical oceanographer with the Sea Education Association in Woods Hole, Massachusetts. “This may be a case of ‘the more we look, the more we’ll find’,” she says.

Indeed, most of the missing plastic is probably untallied because of poor sampling, says Mark Browne, an ecologist at the University of California, Santa Barbara. What Thompson’s team found is “hugely important”, he says. “I really worry about what the concentrations near large coastal cities will be.”

Aside from leaching potentially harmful substances into the environment, the synthetics can also soak up and then release a plethora of chemicals that they encounter between disposal and their final resting place.

“People don’t tend to think of the deep sea floor as a biologically rich habitat, but it is,” says Law.