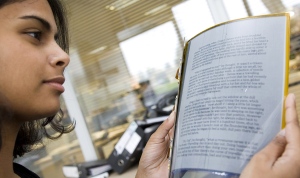 Marketing flexible plastic displays such as 'electronic paper' will now be the focus of Plastic Logic.

Plastic Logic, a technology company that makes flexible organic electronic circuits and displays, has conceded defeat in the e-reader race.

The company, founded in 2000 as a spin-out of the Cavendish Laboratory at Cambridge University, UK, was given a US$200-million financial boost from the state-owned Russian Corporation of Nanotechnologies (Rusnano) in January 2011. The investment was intended, in part, to develop a flexible and robust e-reader to be used in Russian schools.

But on 16 May, Plastic Logic announced that it was abandoning its e-reader plans and closing its development plant in the United States. Instead, the company will try to sell its flexible-display technology to other companies that might want to use it in their own products.

The move comes as no surprise to Jon Melnick, an analyst at Lux Research in Boston who specialises in electronics and innovation. Plastic Logic’s technology was too expensive to compete with other e-reader manufacturers, he says, adding that a robust e-reader that would be safe in the hands of a clumsy child isn’t a viable market. “At a cost of four or five times what a traditional e-reader costs, it just isn’t worth it. No kid is that clumsy.”

Georgiy Kolpachev, managing director of investments at Rusnano, says that it is disappointing that the market and margins weren't right for Plastic Logic's e-reader, but that “it’s a reality of life”. Plastic Logic still has a competitive advantage, says Kolpachev, because the company has shown that organic electronic devices can be made on an industrial scale — in this case in a facility in Dresden, Germany. Rusnano’s investment in Plastic Logic was never just about making an e-reader for Russia, he adds, saying that his company remains committed to the firm.

Indro Mukerjee, who became chief executive of Plastic Logic in September 2011, insists that that this is a positive step. “The e-reader market is not the place where we need to be,” he says. “It’s a distraction.” He says that Plastic Logic now needs to focus on developing its organic-electronics technology.

But the company faces tough competition. In March 2012, LG Display of Seoul, South Korea, launched a flexible e-paper product with a backplane made from thin film transistors based on semiconductive inorganic materials. The LG device isn’t rollable or as flexible as a completely organic one such as Plastic Logic’s, which uses non-metallic organic transistors in a backplane. But if anyone can develop a reasonably priced flexible e-reader, it is more likely to be a bigger, more experienced company such as LG, says Melnick.

Mukerjee says that Plastic Logic is in talks with a number of potential partners. He suggests that the company’s technology could be licensed to e-book makers for rugged applications in the military or other harsh environments. Other applications include printing organic transistors to be used in sensors or logic circuits on any surface, says Mukerjee.

John Rogers, a materials scientist at the University of Illinois at Urbana-Champaign, who earlier described Rusnano’s 2011 investment as “eye-popping”, says that he’s still impressed with Plastic Logic’s technology. “I still think it’s a very promising technology platform, even if e-readers aren’t a killer app for them,” he says.

Mukerjee echoes Kolpachev's insistence that the time Plastic Logic spent trying to develop an e-reader was not wasted and that the company remains ahead of its competitors.

Melnick disagrees. Other companies, such as Polymer Vision of Eindhoven, the Netherlands, are also developing plastic electronics, and Plastic Logic’s failed foray into producing their own e-reader has left them behind the competition, he says. “Plastic Logic got a lot of money and just went too far too fast,” he says.