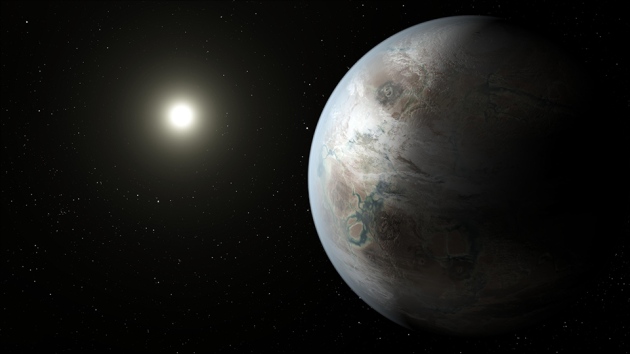 Astronomers have found dozens of exoplanets that might contain liquid water, and perhaps support life.

In the search for life beyond Earth, false alarms abound. Researchers have generally considered, and rejected, claims ranging from a 1970s report of life on Mars to the 1990s ‘discovery’ of fossilized space microbes in a meteorite.

Now, inspired by the detection of thousands of planets beyond the Solar System, NASA has started a fresh effort to learn how to recognize extraterrestrial life. The goal is to understand what gases alien life might produce — and how Earth-bound astronomers might detect such ‘biosignatures’ in light passing through the atmospheres of planets trillions of kilometres away (see ‘Searching for alien life’). 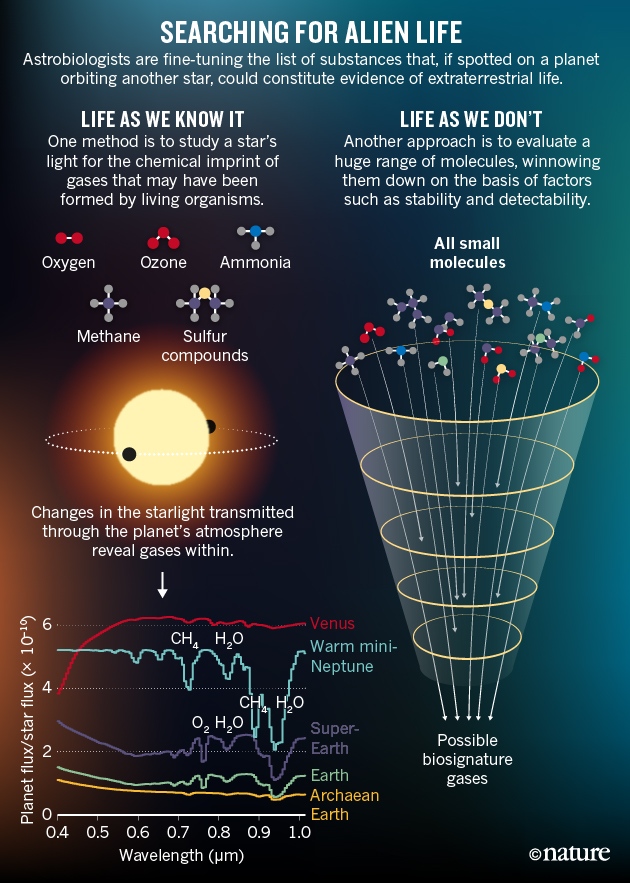 The agency will convene a workshop this week in Seattle, Washington, with the ultimate goal of advising a NASA exoplanet group on how to avoid embarrassing errors in the future. “We have to come together and determine what good evidence of life on another planet could be,” says Shawn Domagal-Goldman, one of the workshop’s organizers and an astronomer at NASA’s Goddard Space Flight Center in Greenbelt, Maryland.

The exercise comes at a crucial time, as astronomers grapple with how to interpret exoplanet data from the next generation of telescopes. Some scientists are working to understand how nature could produce archetypal biosignature gases, such as oxygen, in the absence of living organisms. Others are trying to think as expansively as possible about the types of biochemistry that could sustain life.

“We could fool ourselves into thinking a lifeless planet has life — or we could be missing life because we don’t really understand the context of what could be produced on another planet,” says Sarah Rugheimer, an astronomer at the University of St Andrews, UK.

Detecting a biosignature gas is just the first step to understanding what could be happening on an exoplanet. Each world has its own combination of physical and chemical factors that may or may not lead to life, says Victoria Meadows, an astronomer at the University of Washington in Seattle. “Planets are hard, and we shouldn’t think they are all going to be the same or reveal their secrets very easily,” she says.

A planet’s environment is key. Some Earth-sized planets orbit M dwarf stars — the most common type of star in the Galaxy — at the right distance to harbour liquid water. But Meadows’ collaborators have shown1 that photo-chemical reactions can send water into the planet’s atmosphere and then break off its hydrogen, which escapes into space. What’s left is a thick blanket of oxygen that might seem as if it came from living organisms, but results from a run-away greenhouse effect.

There are ways to tell. The runaway greenhouse would create an atmosphere thousands of times denser than Earth’s, in which O2 molecules collide to produce O4. So spotting O4 in a planet’s atmosphere could be a clue that the oxygen does not, in fact, come from life, Meadows’ team reported this year2.

Another method is to draw up a list of alternative biosignature gases — things not as obvious as oxygen that might be made by organisms under certain conditions. These include dimethyl sulfide3, which is produced by Earthly phytoplankton, or even ammonia4. On a cold alien planet, organisms might make the gas using the same chemical process as industrial manufacturers.

At the Massachusetts Institute of Technology in Cambridge, astronomer Sara Seager has begun to examine 14,000 compounds that are stable enough to exist in a planetary atmosphere. She and her colleagues are winnowing down their initial list of molecules using criteria such as whether there are geophysical ways to send the compound into the atmosphere5.

“We’re doing a triage process,” says Seager. “We don’t want to miss anything.”

The Seattle meeting aims to compile a working list of biosignature gases and their chemical properties. The information will feed into how astronomers analyse data from NASA’s James Webb Space Telescope, slated for launch in 2018. The telescope will be able to look at only a handful of habitable planets, but it will provide the first detailed glimpse of what gases surround which world, says Nikole Lewis, an astronomer at the Space Telescope Science Institute in Baltimore, Maryland.

No single gas is likely to be a slam-dunk indicator of alien life. But Domagal-Goldman hopes that the workshop will produce a framework for understanding where scientists could trip themselves up. “We don’t want to have a great press release,” he says, “and then a week later have egg on everybody’s faces.”