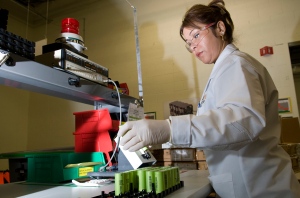 A123 Systems struggled to get its batteries into the automotive market.

A company that charged up the US battery industry with its lithium-ion technology has gone dead. After an 11-year run, A123 Systems filed for bankruptcy on 16 October.

For insiders, the news is no surprise. A123, headquartered in Waltham, Massachusetts, has been buoyed by government grants and private investment but has fallen on hard times in the past year (see 'Manufacturing woes haunt high-tech battery maker'). Again and again its rechargeable batteries — similar to the batteries that power laptops and iPhones — had trouble finding a foothold in the automotive market.

Now some worry that A123's collapse could stunt future investments in US battery research. “My concern is that the A123 debacle will disillusion the people who put in money thinking they were going to make big bucks on car batteries,” says John Goodenough, a materials scientist at the University of Texas at Austin.

Once a model of innovation in academia, A123 licensed technology developed at the Massachusetts Institute of Technology in Cambridge by materials scientist (and company co-founder) Yet-Ming Chiang. Exploring different approaches to lithium-ion batteries, Chiang's team figured out how to boost the power of such cells by sprinkling zirconium and other metals into a blend of lithium, iron and phosphate pioneered by Goodenough1.

The rise and fall of A123 systems

February 2002: Yet-Ming Chiang and his colleagues at the Massachusetts Institute of Technology in Cambridge publish Nature Materials paper describing a new cathode material for lithium-ion batteries1.

March 2008: GE puts $20 million into A123 for Think, a Norwegian electric-car manufacturer (now out of business).

May 2008: The USABC and the DOE provide $12.5 million to A123 specifically for hybrid electric vehicles.

January 2009: A123 passed over for Chevrolet Volt contract, which goes to LG Chem, based near Seoul, South Korea.

2009: Chrysler recruits A123 for its ENVI line of electric vehicles. Contract is dropped after Chrysler declares bankruptcy.

November 2011: Layoff of factory workers at both Michigan plants.

March 2012: Defective batteries lead to a recall by carmaker Fisker.

The power, safety and longevity provided by this formula attracted the toolmaker Black & Decker, which in 2005 chose A123's batteries to power its cordless DeWALT tools.

“In a remarkably short time we went from a concept to manufacturing in volume for a new line of power tools,” says Bart Riley, co-founder and chief technical officer of A123. “We hit the industry with quite a splash.”

Buoyed by the early success, the company pushed into other markets. Grants from the US Department of Energy (DOE) and the US Advanced Battery Consortium (USABC) — an organization composed of car manufacturers Chrysler, Ford and General Motors (GM) — financed the development of batteries for electric and hybrid vehicles. BAE Systems in Arlington, Virginia, became a client, making A123 the world's largest supplier of lithium-ion batteries for buses and trucks, says Riley.

A123 tried to overcome this limitation, but “we were moving away from our strengths,” says Riley. “The more we moved away from power and towards energy, the less of a technical advantage we had.”

In 2009 A123 lost a bid to make the battery for GM’s Chevrolet Volt, a plug-in hybrid vehicle. GM chose the Korean company LG Chem, based near Seoul.

A123 pivoted, landing a contract in 2009 for Chrysler's proposed electric vehicle programme, ENVI. An initial public offering in 2009 raised about US$391 million for the company. A DOE grant of about $249 million and tax breaks from Michigan allowed the company to build two factories in the state.

Then Chrysler declared bankruptcy in 2009, and the plans evaporated. A123 signed a contract in 2012 to sell batteries to Fisker, a small US carmaker in Anaheim, California, also funded by the DOE. But production of Fisker's hybrid electric sports car, the Karma, was delayed. Defects in the batteries led to an expensive recall. With its finances declining, A123 laid off some of its Michigan workers in November 2011.

“This is very tough business,” says Ted Miller, the Ford representative on the USABC management committee. “If you look across the landscape of companies that have been successful, it's kind of rare to be only in batteries.”

Still, A123's downfall isn't deterring another small company from staying in the race. Envia Systems, based in Newark, California, funded by the DOE and GM, makes electrodes from a mixture of nickel, cobalt and manganese developed by Khalil Amine and other materials scientists at Argonne National Laboratory in Illinois. The material packs a record-setting energy density, the company claims — potentially allowing the batteries to be smaller, and thus cheaper, than those based on other lithium-ion technologies.

“Our guess is that by 2015, the first cars with our technology should be coming out,” says Atul Kapadia, Envia's chief executive.

Johnson Controls (JCI), based in Glendale, Wisconsin, has made an offer to purchase A123's assets, including the Michigan factories. JCI, which makes products for automobiles and buildings, has received about $5.5 million from the USABC to develop lithium-ion batteries. But the company isn't saying whether it will stick with A123's approach or try another technology.

Ultimately, the fate of US battery makers will remain tied to that of the electric car itself. And for now, no battery technology can compete cost-wise with the internal combustion engine.

“The outlook in the near future for electric cars does not look that promising,” says Daniel Scherson, an electrochemist at Case Western Reserve University in Cleveland, Ohio. “They are still just too expensive.”