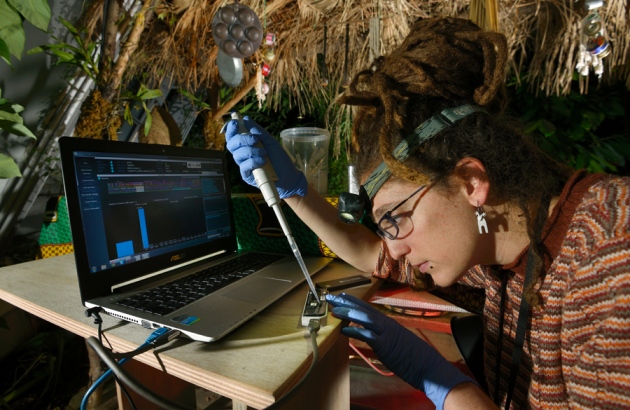 The MinION device can sequence small genomes, such as those of bacteria and viruses, displaying the results as they are generated.

In April, Joshua Quick boarded a plane to Guinea with three genetic sequencers packed in his luggage. That fact alone is astonishing: most sequencing machines are much too heavy and delicate to travel as checked baggage in the hold of a commercial airliner. What came next was even more impressive. For 12 days, Quick used these sequencers — called MinIONs — to read the genomes of Ebola viruses from 14 patients in as little as 48 hours after samples were collected.

That turnaround has never been available to epidemiologists in the field before, and could help them to trace sources of infection as they try to stamp out the West Africa epidemic. The European Mobile Laboratory Project, based in Hamburg, Germany, is building a dedicated MinION lab at a treatment centre in Coyah, Guinea, where the machines will be used to sequence patient DNA.

“This is democratization of sequencing,” says Quick, who studies Ebola genomes with Nicholas Loman (both are bioinformaticians at the University of Birmingham, UK). “You don’t have to rely on expensive infrastructure and costly equipment.”

Quick and Loman’s research exemplifies what excites biologists about the MinION, a palm-sized gene sequencer made by UK-based Oxford Nanopore Technologies. The device is portable and cheap. It can read out relatively long stretches of genetic sequence, an ability increasingly in demand for understanding complex regions of genomes. And it plugs into the USB port of a laptop, displaying data on the screen as they are generated, rather than at the end of a run that can take days.

“The MinION is pretty extraordinary,” says David Deamer, a biochemist at the University of California, Santa Cruz. “We’re all on kind of a high right now.”

The MinION was first released last spring through an early-access programme that offered researchers the device and flow cells — the disposable working guts of the sequencer — for a US$1,000 deposit. At a meeting in London on 14 and 15 May, users will share their experiences of testing the device and writing programs to analyse the data it generates. For example, Deamer is using it to detect and study the kinds of nucleic acids that might have given rise to Earth’s earliest life.

The pilot programme has helped Oxford Nanopore to recover from a recent gaffe. It promised in 2012 that in 2013 it would release not just the MinION but also other machines able to sequence a human genome in 15 minutes. Those superfast machines have not yet come to pass, but in February 2014 the company rolled out the MinION. Initial tests suggested that it was not nearly as fast as had been promised and made a worrying number of errors. But Oxford Nanopore has made improvements; recent publications by pilot users have shown that a MinION can do quite a lot. It can reliably sequence small genomes, such as those of bacteria and yeast. It can discriminate between closely related bacteria and viruses, read complex portions of the human genome, and differentiate between the two versions of a gene that are carried on each chromosome pair.

Sequencing on the fly

Oxford Nanopore’s progress has some biologists imagining new ways to use sequencing in the field. On 4 May, Italian biologists toted MinIONs and other equipment into a rainforest in southern Tanzania to sequence the genome of a native frog. Karen James at the MDI Biological Laboratory in Bar Harbor, Maine, wants to put it in the hands of citizen scientists to survey bio­diversity in Maine’s Acadia National Park. If Oxford could modify the MinION to run on an iPhone, an app written by computational biologist Michael Schatz at Cold Spring Harbor Laboratory in New York might enable on-the-spot identification of unknown organisms using just the two hand-held devices. NASA scientists even plan to send a MinION to the International Space Station, where astronauts would test it in microgravity. If that goes well, astrobiologist Aaron Burton at the Johnson Space Center in Houston, Texas, suggests that a hand-held sequencer might be sent to Mars to look for molecular signs of life on the red planet.

Yet there is still plenty that the MinION cannot do. It is not practical to sequence large genomes with the device: Schatz estimates that it would take a year for the current version to sequence the equivalent of a human genome. And the machine still misidentifies DNA sequence 5–30% of the time — a high error rate compared with those of existing full-sized sequencers.  It also has problems reading regions of sequence where long stretches of the same DNA base are common.

Improvements are coming: the MinION reads each genetic base many times, and bioinformaticians in the pilot programme have developed error-correcting methods to combine data from these reads into results that have a much lower overall error rate.

Biologists want more from the MinION — faster and more accurate performance, and the ability to simply drop a sample onto the sequencer with no preparation. Users hope that, at the London meeting, the company will unveil improvements in the speed and performance of the technology that it has hinted at on Twitter over the past month. The commercial price is also a big unknown; low cost is a huge part of the device’s appeal, but Oxford will need to prove to its investors that they can still make money selling devices cheaply. If, as Deamer says, biologists are on a high right now, the company still has much to do to keep the buzz from fading.

This story mistakenly stated that the MinION device has problems reading long, repetitive regions of DNA sequence. It should have said that those difficulties occur in sections of genome that are rich in long stretches of a single DNA base. The text has now been corrected.