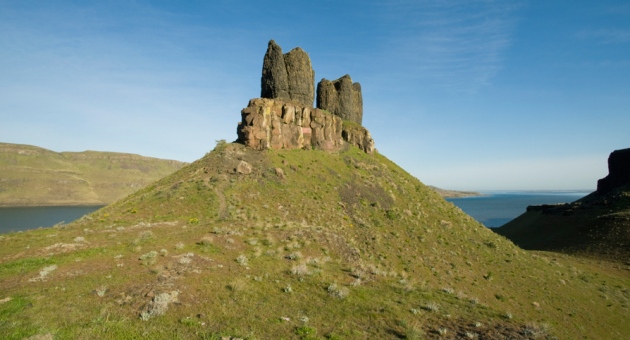 Basalt formations, such as these towers on the Columbia River in Washington state, could be used to trap carbon dioxide.

By early August, scientists will have pumped 1,000 tonnes of pure carbon dioxide into porous rock far below the northwestern United States. The goal is to find a permanent home for the carbon dioxide generated by human activities.

Researchers at the US Department of Energy’s Pacific Northwest National Laboratory (PNNL) in Richland, Washington, began the injections into the Columbia River Basalt formation near the town of Wallula on 17 July. The rock contains pores created as many as 16 million years ago, when magma flowed across what is now the Columbia River Basin. Bubbles of CO2 migrated to the edges of the magma as it cooled, forming layers of holes sandwiched between solid rock (see 'Rock steady').

In pumping emissions back underground, “we are returning the carbon dioxide from whence it came”, says Pete McGrail, an environ­mental engineer at the PNNL who is heading the experiment, part of a larger energy-department programme on ways to sequester carbon. 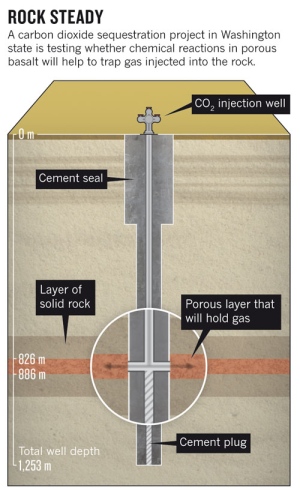 The Wallula project is the second of two worldwide to target basalt formations, which scientists hope can hold — and permanently mineralize — vast quantities of gas. In basalt, dissolved CO2 should react with calcium and magnesium to form limestone over the course of decades. Until the gas is locked away, the porous basalt layers are capped by solid rock that will prevent leaking. That should eliminate concerns about leakage that have dogged other proposals to store CO2 deep underground, often in sandstone reservoirs.

The basalt reactions are part of a natural weathering process that has helped to regulate atmospheric CO2 levels throughout geological time. Scientists have analysed mineralization in the lab, but it is only now being tested in the field.

Researchers working on the other basalt project, based in Iceland and run by a consortium of US and European scientists along with Reykjavik Energy, made their first CO2 injections last year and will conduct another round this year. Early results look promising, says Juerg Matter, a geochemist at Columbia University’s Lamont-Doherty Earth Observatory in Palisades, New York, who is working on the Iceland project. “The mineralization reaction is most likely faster than what we in the community had thought,” says Matter, who has also contributed to the Wallula project. Assuming that holds true for basalt generally, “you reduce the risk of leakage, and you can pretty much walk away from your storage reservoirs”.

In Wallula, researchers are already monitoring a series of shallow wells around the injection site for signs of CO2 leaking into the soil and groundwater. Once the injection is finished, they will start taking samples from the injection well to monitor water chemistry, track changes in carbon isotopes and check for other evidence of reactions. Lab tests and computer simulations suggest that in general, around 20% of the CO2 should be mineralized within 10–15 years, says McGrail.

The pilot project, however, is operating on a shorter timescale. Fourteen months after the end of injection, the team plans to drill another well and pull up a core of rock to assess the results, says McGrail. “At that point, we are hoping to have some carbonized rock in our hands.”

“We are returning the carbon dioxide from whence it came.”

But achieving sequestration is only half the battle: scientists and engineers must still work out how to capture CO2 from industrial facilities and transport it to the sequestration site cost-effectively. And even if a carbon-mineralization industry took off, establishing it on a global level would require an undertaking on the scale of rebuilding the oil industry.

Scientific opinions differ over whether it would be more desirable to stop burning fossil fuels than to undertake massive carbon-sequestration ventures — but if sequestration were to be favoured, many think that basalt could be important. And although backers of large-scale basalt sequestration have so far explored formations in the US northwest and southeast as well as in India, many are also looking offshore, where the sea floor could accommodate CO2 emissions for centuries to come.

Carbon-sequestration research has until now tended to focus on sandstone reservoirs rather than basalt. There are two main reasons, says David Goldberg, a marine geologist at Lamont-Doherty. The oil industry is used to working with sandstone, and such formations are relatively common — making it easier to transport CO2 from a power plant or other source to a sequestration site. That might mean that sandstone is more economically viable than ocean basalt, at least in the short term. But Goldberg says that the best place to bury globally significant volumes of CO2 is offshore, where they will be safely capped by sediments and sea water.

A single formation off the US west coast, with an estimated storage volume of 685 cubic kilometres, has the potential to hold all the CO2 emissions the country produces in a century, Goldberg notes. “If we can make it work,” he says, “the oceans have a lot of advantages.”

But none of this will be cheap, says Kevin Johnson, a geochemist at the University of Hawaii in Honolulu who has worked on lab experiments with McGrail’s team. “It’s a question of social importance — and whether the climate situation gets dire enough to justify the cost.”