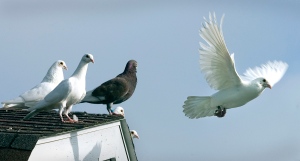 The physiology behind pigeons' remarkable navigational abilities has long been a source of debate.

Individual neurons in birds' brains can relay crucial information about Earth’s magnetic field, possibly providing the animals with an ‘internal GPS’, according to research into magnetoreception.

Pigeons’ remarkable navigational feats have long been pegged to the birds’ ability to sense magnetic fields, but pinning down how they do so has frustrated scientists for years. Work published today in Science shows that individual cells seem to encode information on a magnetic field’s direction, intensity and polarity1. The work also suggests that these signals come from a part of the inner ear called the lagena, further complicating matters for researchers in the field.

Until recently, the two best candidate sites for the location of birds’ magnetic sensors were the eyes and the beak. There is good evidence for a form of magnetic ‘compass’ in the eye that uses a mechanism linked to light. And many believed that iron deposits found in the beak were also functioning as magnetic sensors.

But last year, David Dickman and Le-Qing Wu, now at Baylor college of Medicine in Houston, Texas, reported that bird magnetoreception seemed to be linked to the lagena2, resurrecting suggestions from earlier research3 that had generally fallen by the wayside.

For their latest research, the subject of today's Science paper, Wu and Dickman restrained seven homing pigeons (Columba livia) and placed them in a dark room. A magnetic field was created to cancel Earth’s field, and the researchers then monitored the birds’ brain activity while creating and rotating carefully controlled artificial magnetic fields around the pigeons.

The authors found that vestibular neurons — which are linked to balance systems in the inner ear — fired differentially in response to alterations in the field’s direction, intensity and polarity, and that these cells were especially sensitive to the bandwith that covers Earth’s geo-magnetic field.

Combining information on direction, intensity and polarity could provide more than just a compass heading; it could be used to produce positional and directional information because of the way Earth's field varies in different locations. “It could theoretically be used as a GPS unit,” says Dickman.

“If this work can be independently replicated it is very important,” says Henrik Mouritsen, who works on magnetoreception at the University of Oldenburg in Germany. Mouritsen adds that it is now vital to do behavioural work to show that the vestibular system is performing magnetoreception — for example, by severing the nerves and then testing birds’ ability to sense magnetic fields. Mouritsen is working with Dickman on some of this work.

Mouritsen also cautions that there have been many findings in the field that could not be replicated. One example, he says, is a 2002 Nature paper suggesting that robins had compass magnetoreception in only one eye4. His team has since disputed this finding5, although the original team stands by its conclusions6.

The Science paper comes just days after a report in Nature revealed that cells in pigeons' upper beaks are not magnetoreceptors but immune cells called macrophages, which could not be a part of this avian ‘sixth sense’7.

This does not necessarily mean that there is not a magnetoreceptor in the beak region. There is a considerable amount of evidence linking the ability to this body region, not all of which rests on the structures now identified as macrophages8.

“I would say now there are three potential places where magnetoreceptors may rest,” says David Keays, a neuroscientist at the Institute of Molecular Pathology in Vienna, who led the team behind the macrophage paper. These are the beak, the eyes and the ears. “Our paper and this paper are in a sense raising more questions than answers,” Keays adds. “It’s an extremely exciting time to be in the field.”