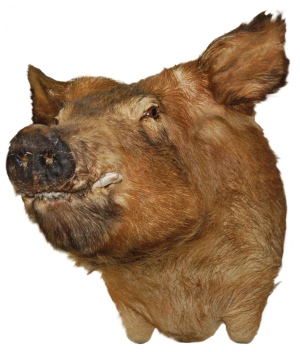 T. J. Tabasco is something of a porcine goddess at the University of Illinois, Urbana-Champaign, where her ruddy, taxidermied head looks down from the office wall of geneticist Lawrence Schook. Now she has been immortalized in this week’s Nature1 — not by name, but by the letters of her DNA.

Scientists are salivating. For the past couple of decades they have been slowly teasing information from the pig genome, applying it to breed healthier and meatier pigs, and to try to create more faithful models of human disease. This week’s draft sequence of T. J.’s genome (see page 393), with its detailed annotation — a ‘reference genome’ — will speed progress on both fronts, and perhaps even allow pigs to be engineered to provide organs for transplant into human patients. “Agriculture in particular will benefit fast,” says Alan Archibald of the Roslin Institute in Edinburgh, UK, one of the paper’s lead authors. “The pig industry has an excellent track record for rapid adoption of new technologies and knowledge.”

T. J., a domestic Duroc pig (Sus scrofa domesticus), was born in Illinois in 2001. The next year, Schook and his colleagues generated a fibroblast cell line from a small piece of skin from her ear and commissioned clones to be created from it, so that they could work on animals all with the same genome. One set of clones was created at the National Swine Resource and Research Center (NSRRC) in Columbia, Missouri, along with genetically engineered pigs with genes added or deleted to mimic human diseases.“Making such pigs has got increasingly easier as knowledge of the genome increases,” says physiologist Randall Prather, a co-director of the NSRRC, which is funded by the National Institutes of Health (NIH).

Geneticist Martien Groenen, part of the team that sequenced the pig genome, chews the fat with Thea Cunningham.

The NIH launched the NSRRC in 2003 to encourage research in pig disease models. Pigs are more expensive to keep than rodents, and they reproduce more slowly. But the similarities between pig and human anatomy and physiology can trump the drawbacks. For example, their eyes are a similar size, with photoreceptors similarly distributed in the retina. So the pig became the first model for retinitis pigmentosa, a cause of blindness. And four years ago, researchers created a pig model of cystic fibrosis2 that, unlike mouse models, developed symptoms resembling those in humans.

Geneticist and veterinarian Eckhard Wolf at the Ludwig-Maximilian University in Munich, Germany, has exploited the similarity between the human and pig gastrointestinal system and metabolism — like us, pigs will eat almost anything and then suffer for it — to develop models of diabetes. One pig model carries a mutant transgene that limits the effectiveness of incretin, a hormone required for normal insulin secretion3. Mice with the transgene developed unexpectedly severe diabetes, but the pigs have a more subtle pre-diabetic condition that better models the human disease. “This shows the importance of using an animal with a relevant physiology,” says Wolf.

Pig models are now being developed for other common conditions, including Alzheimer’s disease, cancer and muscular dystrophy. This work will be enriched by the discovery, reported in the genome paper, of 112 gene variants that might be involved in human diseases. Knowledge of the genome is also allowing scientists to try to engineer pigs that could be the source of organs, including heart and liver, for human patients. Pig organs are roughly the right size, and researchers hope to create transgenic pigs carrying genes that deceive the immune system of recipients into not rejecting the transplants.

Back on the farm, early knowledge about the pig genome led to the discovery in 1991 of a gene involved in porcine stress syndrome, in which the stress of overheating, being moved or even having sex causes the animals to die suddenly4. It then became possible to test for the gene and select pig stocks free of it.

Having the full genome should also help investigators to breed out susceptibility to porcine reproductive and respiratory syndrome (PRRS), a viral disease costing the US pig industry US$600 million per year. The PRRS Host Genetics Consortium, a network of US research groups, has identified a region on one chromosome that affects levels of virus in the blood during infection5. Archibald, who works on PRRS, says that the high-quality genome sequence should help investigators zero in on the genes responsible.

But the pig genome is not just about applications. Lead co-author Martien Groenen, a genome researcher from Wageningen University in the Netherlands, has resequenced the genomes of scores of different strains of wild and domestic pigs, and used the information to show that the pig was domesticated independently in Asia and Europe. He has also started to work out which genes were involved in the selection of desired traits — such as a longer spine to give more bacon — on different continents. “It’s curiosity-driven research, but it may also help animal breeders in the future,” he says.