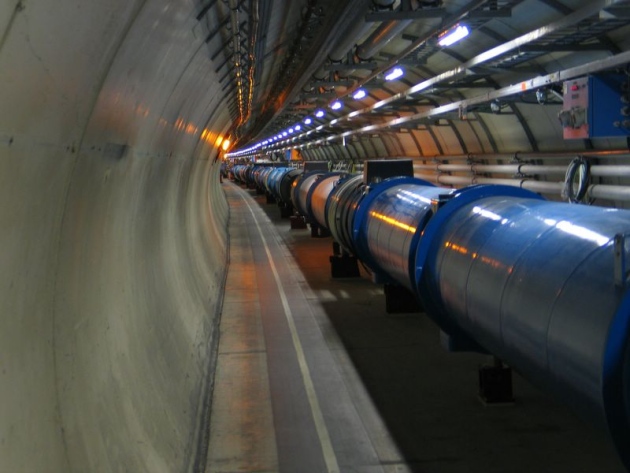 Thousands of scientists and engineers have worked on the Large Hadron Collider at CERN.

A physics paper with 5,154 authors has — as far as anyone knows — broken the record for the largest number of contributors to a single research article.

Only the first nine pages in the 33-page article, published on 14 May in Physical Review Letters1, describe the research itself — including references. The other 24 pages list the authors and their institutions.

The article is the first joint paper from the two teams that operate ATLAS and CMS, two massive detectors at the Large Hadron Collider (LHC) at CERN, Europe’s particle-physics lab near Geneva, Switzerland. Each team is a sprawling collaboration involving researchers from dozens of institutions and countries.

By pooling their data, the two groups were able to obtain the most precise estimate yet of the mass of the Higgs boson — nailing it down to ±0.25%.

Robert Garisto, an editor of Physical Review Letters, says that publishing the paper presented challenges above and beyond the already Sisyphean task of dealing with teams that have thousands of members. “The biggest problem was merging the author lists from two collaborations with their own slightly different styles,” Garisto says. “I was impressed at how well the pair of huge collaborations worked together in responding to referee and editorial comments,” he adds.

Too big to print?

Every author name will also appear in the print version of the Physical Review Letters paper, says Garisto. By contrast, the 2,700-odd author list for a Nature paper on rare particle decays that was published on 15 May2 will not appear in the June print version, but will only be available online.

Some biologists were upset this week about a genomics paper with more than 1,000 authors3, but physicists have long been accustomed to “hyperauthorship” (a term credited to information scientist Blaise Cronin at Indiana University Bloomington4).

An article published in 2008 about the CMS experiment at the LHC5, before the machine started colliding protons, became the first paper to top 3,000 authors, according to Christopher King, editorial manager of Thomson Reuters ScienceWatch. The paper that announced the ATLAS team's observation of the Higgs particle in 2012 had 2,932 authors, of whom 21 were listed as deceased6.