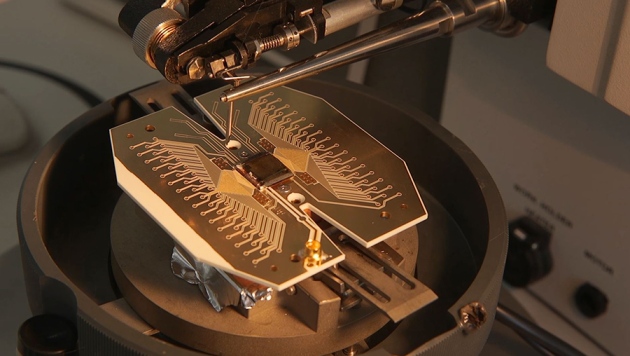 A prototype of the core of a trapped-ion quantum computer.

Physicists have sketched a blueprint for a quantum computer built using existing technology that would be powerful enough to crack important and currently unsolvable problems, such as factoring enormous numbers.

Such a machine would need to be larger than a football pitch and would cost at least £100 million (US$126 million) to make, its designers say.

“Yes it will be big, yes it will be expensive — but it absolutely can be built right now,” says quantum physicist Winfried Hensinger of the University of Sussex in Brighton, UK, who leads the team that published the blueprint in Science Advances1 on 1 February.

The idea is not the first proposal to build a practical quantum computer, and it would involve tough engineering challenges, says Andrea Morello, a quantum physicist at the University of New South Wales in Sydney, Australia. But it is remarkable for its ambition and approach, he says. “I do think this is a landmark paper, and it will be very influential in the community for many years ahead.”

“While this proposal is incredibly challenging, I wish more in the quantum community would think big like this,” agrees Christopher Monroe, a physicist at the University of Maryland in College Park.

Quantum computers promise to exploit the remarkable properties of quantum particles to carry out certain calculations exponentially faster than their classical counterparts. Teams around the world are competing to build them on the scale required for them to be useful, but most designs so far have targeted a few dozen quantum bits, or qubits. Many thousands are probably needed to do useful calculations, such as finding the prime factors of large numbers, a crucial problem in encryption.

Hensinger’s team suggests using ions trapped by magnetic fields to create its qubits — an approach that physicists have been working on for more than 20 years. Most of the components necessary to build a trapped-ion quantum computer have already been demonstrated, Monroe says. “Our community needs a systems-engineering push to simply build it.”

In Hensinger’s blueprint, thousands of hand-sized square modules could be yoked together to produce — in theory — a quantum computer of any size. Key to the design is how to overcome practical problems, such as the need to dissipate heat produced by the machine. “Such high-level issues are rarely considered by people in the field of quantum computing, either because they think it’s goofy to think that big, or because in their own physical system, it is nearly impossible to fathom such a high-level view,” Monroe says.

In each module, around 2,500 trapped-ion qubits would be suspended in magnetic fields, protected from interference that would affect their delicate quantum states. To perform operations, ions interact with their neighbours by shuttling around an x-shaped grid, like Pac-Man characters.

Rather than using individual lasers to control each trapped ion — which would require a huge engineering effort to build at scale — the team proposes to control the qubits using a field of microwave radiation through the entire computer. To tune individual qubits in and out of interaction with the wider field, they need only apply a local voltage. The scientists’ scheme suggests using liquid nitrogen to keep the system cool.

The ions themselves would hop from chip to chip to transmit information between the modules — a technique that produces inter-chip connection speeds 100,000 times those of systems that use light waves and optical fibres, says Hensinger. The individual modules would be replaceable, built on silicon bases that could be manufactured using techniques available in the conventional electronics industry, he adds.

To find the prime factors of a 2,048-bit (or 617-digit-long) number — something no classical computer can do today — the computer would need 2 billion qubit ions. They would take around 110 days to crack the problem, Hensinger says. This would allow researchers to crack today’s best encryption systems.

In theory, only 4,096 qubits are required for this calculation, but 2 billion ions would be needed because of the error rates associated with the modest quality of current trapped-ion-qubit technology. But reducing the rate at which qubits make errors could drastically reduce the computer’s dimensions, perhaps bringing it down to the size of a large room, says Hensinger.

Huge technical challenges still stand in the way of any team aspiring to build the quantum computer — such as how to make the required strong magnetic-field gradients and engineer in the precise control needed to manipulate qubits. But Hensinger and his colleagues are now constructing a prototype based on their design, in an effort to demonstrate that their plans really could work.

“Building that thing will be an extraordinary engineering challenge, but one that’s worth pursuing,” says Morello.