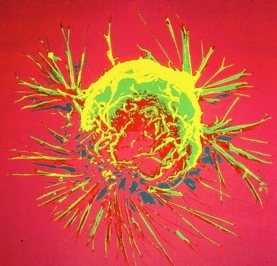 Could cancer be our cells’ way of running in ‘safe mode’, like a damaged computer operating system trying to preserve itself, when faced with an external threat? That’s the conclusion reached by cosmologist Paul Davies at Arizona State University in Tempe and his colleagues, who have devised a controversial new theory for cancer’s origins, based on its evolutionary roots. If correct, their model suggests that a number of alternative therapies, including treatment with oxygen and infection with viral or bacterial agents, could be particularly effective.

At first glance, Davies, who is trained in physics rather than biomedical science, seems an unlikely soldier in the ‘war on cancer’. But about seven years ago he was invited to set up a new institute at Arizona State — one of 12 funded by the US National Cancer Institute — to bring together physical scientists and oncologists to find a new perspective on the disease. “We were asked to rethink cancer from the bottom up,” Davies says.

Davies teamed up with Charley Lineweaver, an astrobiologist at The Australian National University in Canberra, and Mark Vincent, an oncologist at the London Health Sciences Center in Ontario. Together they have come up with an ‘atavistic’ model positing cancer is the re-expression of an ancient “preprogrammed” trait that has been lying dormant. In a new paper, which appeared in BioEssays in September1, they argue that because cancer appears in many animals and plants, as well as humans, then it must have evolved hundreds of millions of years ago when we shared a common single-celled ancestor.

At that time, cells benefited from immortality, or the ability to proliferate unchecked, as cancer does. When complex multicellular organisms developed, however, “immortality was outsourced to the eggs and sperm,” Davies says, and somatic cells (those not involved in reproduction) no longer needed this function.

The team’s hypothesis is that when faced with an environmental threat to the health of a cell — radiation, say, or a lifestyle factor — cells can revert to a “preprogrammed safe mode”. In so doing, the cells jettison higher functionality and switch their dormant ability to proliferate back on in a misguided attempt to survive. “Cancer is a fail-safe,” Davies remarks. “Once the subroutine is triggered, it implements its program ruthlessly.”

Speaking at a medical engineering conference held at Imperial College London, on 11 September, Davies outlined a set of therapies for cancer based on this atavistic model. Rather than simply attacking cancer’s ability to reproduce, or “cancer’s strength,” as Davies terms it, the model exposes “cancer’s Achilles’ heel.” For instance, if the theory is correct, then cancer evolved at a time when Earth’s environment was more acidic and contained less oxygen. So the team predicts that treating patients with high levels of oxygen and reducing sugar in their diet, to lower acidity, will strain the cancer and cause tumors to shrink.

The effects of oxygen level on cancer have been independently investigated for many years and appear to support Davies’s ideas2, 3, says Costantino Balestra, a physiologist at Paul Henri Spaak School and the Free University of Brussels, both in Belgium. In unpublished work that has been submitted for peer review, for instance, Balestra and his colleagues have recently demonstrated that slightly elevated oxygen levels can begin to induce leukemia cell death without harming healthy cells.

“It almost looks too easy,” Balestra says. “Our preliminary results seem to show that supplying a little extra oxygen for one or two hours a day, in combination with other traditional cancer therapies, would benefit patients without any harsh side effects.” Balestra emphasizes, however, that this work was not carried out to test Davies’s hypothesis and cannot be taken as proof that the atavistic model is correct.

Davies and his colleagues also advocate immunotherapy — specifically, selectively infecting patients with bacterial or viral agents. Medical researchers are already investigating the promising effects of such an approach for artificially boosting patients’ immune systems to aid in their recovery. Immunotherapy has already performed well in treating melanomas, for instance, and its effects on other cancers are being studied. According to the atavistic model, however, in addition to invigorating the immune system, cancer cells should also be more vulnerable than healthy cells to being killed by infectious agents because they lose higher protective functionality when they “reboot into safe mode,” Davies says. Recent studies injecting clostridium spores in rats, dogs and a human patient also appear to support this interpretation, he says.

Some scientists, such as David Gorski, a surgical oncologist at Wayne State University in Detroit, Michigan, remain skeptical. “The ‘predictions’ of atavism are nothing that scientists haven’t come to by other paths,” he says.

Davies and his colleagues have already begun a more direct test of their theory, in answer to such criticisms. “The key to our theory is looking at the ages of the genes responsible for cancer,” Davies explains. The atavistic model claims that with the onset of cancer, cells revert to a more primitive mode and more recently evolved functions are switched off. The team therefore predicts that as cancer progresses, more recently evolved genes should lose function, whereas ancient genes become active.

To check if this hypothesis is correct, Davies and his colleagues are currently cross-referencing data from the cancer genome atlas, which identifies the genes that are involved in cancer, with various databases that classify the genes that we have in common with other species. The latter data set enables biologists to trace back genes’ ages. Any correlation that exists between the gene age and cancer will be a boost to the atavistic model. “Combining the two data sets hasn’t been done before,” Davies says. “But it’s essentially a data-mining exercise that doesn’t take much money and it’s something we’re working on now.”

Brendon Coventry, a surgical oncologist and immunotherapist at the University of Adelaide in Australia, sees value in physicists working with oncologists to piece together existing medical evidence to try to understand cancer’s origins. “Enormous amounts of money and the brightest minds in biological and medical science have failed to make a big impact in the war on cancer, so maybe it’s time for a new paradigm,” Coventry says, adding: “A cosmologist can look at the cell as an ‘internal universe’ to be explored in a new way.”