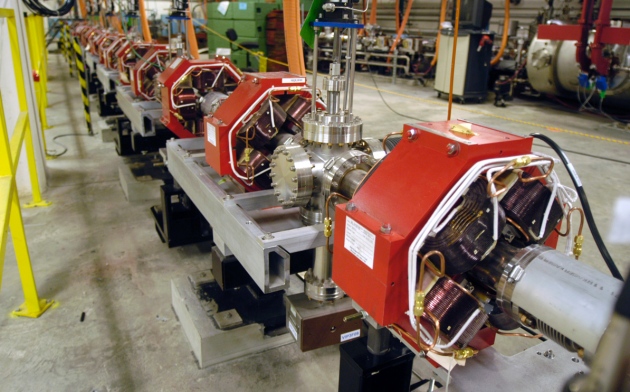 The Jefferson Lab’s Free-Electron Laser is a low-cost option in the bid to discover dark-sector forces.

In tunnels beneath the Thomas Jefferson National Accelerator Facility in Newport News, Virginia, an accelerator whips a beam of electrons around a racetrack. Their energies are modest, but the beam is tightly packed with them — for it takes a very bright beam to detect a photon that doesn’t shine.

In a three-week experiment due to start on 24 April, the electrons will crash into a thin tungsten target at 500 million times a second, creating a cascade of short-lived particles. Amid the debris, physicists with the Heavy Photon Search (HPS) are hoping that they will find signs of something exceedingly rare: a ‘heavy’ or ‘dark’ photon. The discovery would open the door to an unseen world of dark forces and dark atoms that theorists have long speculated about — and could help to pin down the dark matter that is thought to comprise 85% of the matter in the Universe.

The HPS researchers at the Jefferson Lab are quick to concede that the experiment, like two others at the lab probing this dark sector, is a long shot that is likely to achieve little more than null results. But the reasonable price tags for such projects — about US$3 million to build and run the HPS detector — have prompted more physicists to try. “It’s always a great question in physics to go around wondering if there are more fundamental forces,” says physicist John Jaros, co-spokesman for the HPS experiment.

The dark photon, unlike conventional photons, would have mass and would be detectable only indirectly — after the dark photons have decayed into electrons and positrons (the antimatter counterparts of electrons). Yet, like the familiar photon, which carries the electromagnetic force, the dark photon would carry a force — a new fundamental force in addition to the four that we already know about. It would be the first sign of a hidden sector, which could include entire zoos of new particles, including dark matter. “It would be like when Galileo saw moons orbiting Jupiter,” says Nima Arkani-Hamed, a theorist at the Institute for Advanced Study in Princeton, New Jersey.

Theorists had hoped that the Large Hadron Collider — the world’s highest-energy (and most expensive) particle accelerator at CERN, Europe’s high-energy physics lab near Geneva, Switzerland — would open the door to new concepts such as supersymmetry, a set of theories that would resolve some of the problems in the standard model of particle physics. But, so far, it has yielded no clues, such as the dark-matter particles predicted by some supersymmetry models. “The null results are not making people happy,” says Philip Schuster, a theorist at Canada’s Perimeter Institute for Theoretical Physics in Waterloo, Ontario. “People are wondering what other possibilities are out there.”

Instead, some physicists are turning to the ‘intensity frontier’ — creating many collisions and teasing rare events from the wreckage. The electron beams at the Jefferson Lab are not the most powerful, but they are extremely intense. 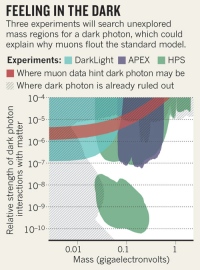 The idea for a dark sector was first proposed in 1986 (B. Holdom Phys. Lett. B 166,196–198; 1986), but remained largely unexplored until a group of theorists, including Arkani-Hamed, resurrected the theory a few years ago (N. Arkani-Hamed et al. Phys. Rev. D 79, 015014; 2009). The group embellished the idea in light of results from a 2006 satellite mission called PAMELA (Payload for Antimatter Matter Exploration and Light-nuclei Astrophysics), which had observed a puzzling excess of positrons in space. Theorists suggested that they might be spawned by dark-matter particles annihilating each other. But the heavy particles most often suggested (WIMPs, weakly interacting massive particles) would have also decayed into protons and antiprotons, which weren’t seen by PAMELA. A dark-matter particle from the dark sector — “even darker matter”, quips Arkani-Hamed — would be seen only through a decay involving the force-carrying dark photon, which would make positrons but not antiprotons.

Another motivation came from an intriguing result reported in 2004 by physicists at Brookhaven National Laboratory in Upton, New York. They found that the magnetic moment created by the spin and charge of the muon, a short-lived particle similar to an electron, did not match the predictions of the standard model. This anomaly, called the muon g-2, could also be rectified by a dark-sector force, says Arkani-Hamed. He adds that the idea is not as crazy as it sounds. “The whole set-up is totally vanilla and conservative from a theorist’s point of view,” he says.

The predictions can be tested cheaply and relatively quickly. The main 6-giga­electronvolt electron beam at Jefferson Lab has the right energy to probe the most likely mass range for a heavy photon. After the HPS’s three-week test run, the beam will be shut down for an upgrade that will double its energy. This will allow the HPS and another project, the A Prime EXperiment (APEX), to explore other parts of the dark sector in 2015. A third proposal, called DarkLight, would use the beam that drives the lab’s free-electron laser to look for heavy photons at lower energies (see ‘Feeling in the dark’).

Arkani-Hamed says that he won’t be surprised if the future path of particle physics emerges from modest experiments such as those at the Jefferson Lab, rather than from work at CERN. “It could be that these much smaller, faster, cheaper, upstart, high-intensity, low-energy experiments might actually dig up evidence for new physics before the big monsters.”