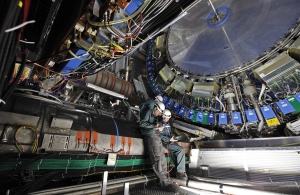 The ATLAS detector (above) and its rival CMS have both seen a clear signal of a new, Higgs-like particle.

Physicists in Europe will present evidence of an entirely new particle on Wednesday, Nature has learned. But more data will be needed to officially confirm whether it is indeed the long-awaited Higgs boson — the particle thought to be behind the mass of all the others.

Even as rumours fly in the popular media, physicists have begun quietly cheering at CERN, the European particle-physics lab near Geneva in Switzerland. “Without a doubt, we have a discovery,” says one member of the team working on the ATLAS experiment, who wished to remain anonymous. “It is pure elation!”

For nearly half a century, physicists have predicted the existence of a particle that helps to endow others with mass. Named after theoretical physicist Peter Higgs, the boson is the upshot of a mathematical trick that unites the electromagnetic and weak nuclear forces into a single ‘electroweak’ interaction. It is considered the final, crucial piece of the standard model of particle physics.

Physicists working on ATLAS saw hints of a Higgs particle last year (see: 'Detectors home in on Higgs boson'), but the first solid results from the full 2012 data set arrived last week. The signal was seen in the decay of a Higgs-like particle into two high-energy photons — one of the cleanest ways to glimpse a Higgs among the hundreds of trillions proton–proton collisions recorded in the Large Hadron Collider (LHC). The data contained “a significant excess" of collision events at a mass of around 125 gigaelectronvolts, the ATLAS researcher told Nature, which is the same value suggested by last year's data. The same signal is present in other Higgs decay channels, too, such as those in which the new Higgs-like particle decays into four leptons.

ATLAS's chief rival, the CMS experiment, also sees significant Higgs evidence in its 2012 data, according to a physicist there, who asked not to be named because both ATLAS and CMS have strict embargoes in place. “In practice you would have to be monstrously sceptical not to be convinced by what we have now,” the source says. "But the final decisions on what to say on Wednesday are still being made."

Physicists have maintained that they will not announce the discovery of the Higgs until the signal surpasses 5 sigma, meaning that it has just a 0.00003% probability that the result is due to chance. The ATLAS and CMS experiments are each seeing signals between 4.5 and 5 sigma, just a whisker away from a solid discovery claim. The results are also consistent with an analysis from the mothballed Tevatron collider, which was presented today at Fermilab in Batavia, Illinois.

CERN's head of communications, James Gillies, confirmed that four of the theorists who dreamt up the Higgs mechanism in the 1960s — François Englert, Carl Hagen, Peter Higgs and Gerald Guralnik — will be present at Wednesday's seminar, but he declined to be drawn on what will be announced. "Things are still evolving here," he says. "Until the spokespersons of the ATLAS and CMS collaborations stand up in front of the audience, it's premature to speculate."

Physicists will now turn their attention to understanding the new particle. Crucially, they will want to know whether it behaves like a mass-giving Higgs, and more specifically whether it behaves like the Higgs predicted in the standard model. One important task will be to carefully measure the different ways that the particle is produced and decays inside the LHC detectors. The rates could be altered by the existence of exotic new particles not predicted by the standard model that would interfere with the underlying quantum mechanical behaviour.

“Fine, there is something there — a resonance," says Martinus Veltman, emeritus professor at the University of Michigan in Ann Arbor, who shared the 1999 Nobel Prize in Physics for his work on the standard model. “Now we have to find out if it has all the properties that the Higgs is supposed to have.”

The standard deviation value of 5 sigma was incorrectly equated with a 0.00006% probability that a result is due to chance. In fact, in the context of the Higgs hunt, it is equivalent to 0.00003%. Thanks to David Spiegelhalter for pointing this out.

You can read more about the official announcement of the results in 'Physicists declare victory in Higgs hunt'.