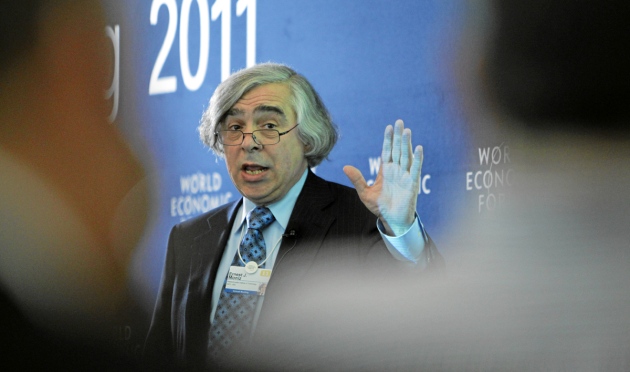 Ernest Moniz looks set to be the next leader of the US Department of Energy.

As the administration of US President Barack Obama prepares for a renewed push towards cleaner energy and reduced greenhouse-gas emissions, the White House appears to have chosen another physicist to head the effort. The leading candidate to replace departing energy secretary Steven Chu is Ernest Moniz, director of the Energy Initiative at the Massachusetts Institute of Technology (MIT) in Cambridge. He would bring to the office a pragmatic support for nuclear power and natural gas, along with a candid desire to, in his own words, “innovate like hell” on basic energy technologies. Colleagues at MIT are waiting for a confirmation of the appointment, which could come as early as this week. “Ernie is a real people person, and he took us to a whole new level in terms of both size and visibility,” says Howard Herzog, a participant in the Energy Initiative who works on carbon capture and sequestration technologies at MIT.

Both Chu and Moniz are respected physicists with a passion for energy, but the resemblance ends there. Chu came to Washington as a policy outsider — and sometimes struggled with relationships on Capitol Hill (see Nature 462, 978–983; 2009). But Moniz is primed for the post: he served as an associate director in the White House Office of Science and Technology Policy under president Bill Clinton before becoming undersecretary of energy in 1997. In that role, he worked on science and energy issues as well as nuclear weapons and nonproliferation programmes. For the past four years, he has served on the President’s Council of Advisors on Science and Technology (PCAST).

Equipped with a disarming smile and a trademark over-the-ears hairstyle, Moniz can address science, engineering and public policy in plain English, on the fly and under a spotlight. “Ernie is really a big-picture guy,” says Rosina Bierbaum, a fellow PCAST member and an environmental-policy expert at the University of Michigan in Ann Arbor. “He can talk the details of science far better than most of us, but he never ever gets lost in the weeds.”

Colleagues say that Moniz would probably aim to build on the work of Chu, who sought to overhaul the Department of Energy’s research and development programme. Chu’s initiatives include the Advanced Projects Research Agency—Energy, which funds risky, high-impact research, and five innovation hubs intended to promote interdisciplinary research on topics such as energy-efficient buildings and batteries.

Moniz took a similar interdisciplinary approach to energy research when he returned to MIT from Washington DC in 2001. His first major project was The Future of Nuclear Power, a 2003 report that declared that nuclear energy is an “important option” for producing low-carbon power, and that explored the science, engineering, economics and policy needed to expand it. After launching the Energy Initiative in 2006, Moniz and his MIT colleagues produced a series of reports on topics including geothermal energy, the electric grid, coal and the nuclear fuel cycle.

“He can talk the details of science far better than most of us, but he never ever gets lost in the weeds.”

Most prominent, and controversial, was a 2011 report on natural gas. It highlighted the possibility that hydraulic-fracturing technologies could expand US gas production, displacing dirtier-burning coal in electricity generation and thus reducing US greenhouse-gas emissions. Moniz’s enthusiasm for natural gas worries some environmentalists, who are concerned about the air and water pollution resulting from its extraction. But gas has indeed helped to reduce emissions: in 2011, US greenhouse-gas emissions were nearly 8% below those in the peak year of 2007.

Talking to Nature last July, Moniz laid out his energy-policy goals for the current decade: reduce demand; substitute gas for coal; and innovate to reduce the cost of low-carbon technologies for areas such as nuclear power, renewable energy and capturing and sequestering carbon dioxide from fossil-fuel combustion. Moniz noted how basic research on hydraulic fracturing, funded by the Department of Energy and dating back to the 1980s, is now paying off. “If you came out with a policy to reduce coal use by a third, all hell would break loose politically. But the market did it by itself, and you don’t hear anybody complaining,” he said. “To me, the lesson from that is the importance of innovation to reduce the costs of the zero-carbon options.”

The key, he said, is to put in place a long-term plan to reduce greenhouse-gas emissions once gas has replaced coal. “Gas is a bridge, but it has to be a bridge to somewhere,” he said.