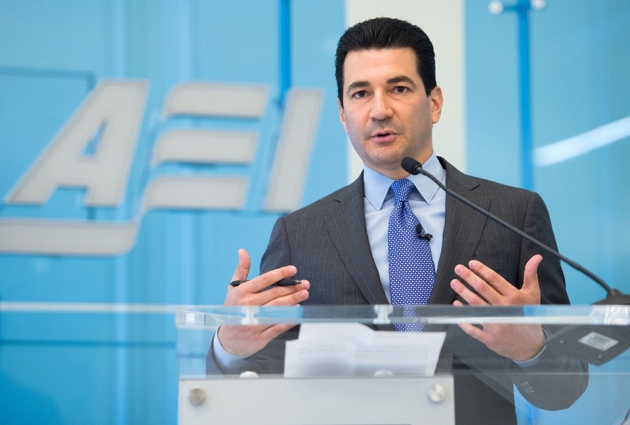 President Donald Trump has nominated Scott Gottlieb — a conservative pundit, physician and venture capitalist — to head the US Food and Drug Administration (FDA).

Gottlieb, who serves on the board of several pharmaceutical companies, is a vocal critic of the health-care reforms instituted by former president Barack Obama. At times, he has also characterized the FDA as standing in the way of innovation, slowing patients' access to new drugs and limiting physicians' autonomy.

The criticisms are based on experience: Gottlieb has worked at the agency before, including as deputy commissioner for medical and scientific affairs under former president George W. Bush. Gottlieb, who was nominated on 10 March, would have to be confirmed by the US Senate before taking office again.

“Scott Gottlieb is not the worst choice that Mr. Trump could make for the FDA commissioner,” says Jaydee Hanson, a senior policy analyst at the Center for Food Safety, a consumer-activist group in Washington DC. Hanson notes that although Trump pledged during his campaign to do away with food-safety regulations that require too many inspections, Gottlieb at least has argued that more needs to be done to ensure the safety of imported food.

The FDA appointment has been closely watched by the pharmaceutical industry and consumer activists alike: reducing regulation is one of Trump's top priorities. In a 28 February speech to Congress, Trump promised to "slash the restraints" on drug approval, complaining about the “slow and burdensome approval process” at the FDA.

But Gottlieb is a more conventional choice to lead the FDA than some of Trump’s other choices of agency heads. He is a fellow of the American Enterprise Institute, a conservative think tank in Washington DC, where he has argued that some aspects of the Affordable Care Act, Obama’s signature health-care reform law, were predicated on misconceptions about US health-care economics. He is also a partner at New Enterprise Associates, a large venture-capital firm headquartered in Chevy Chase, Maryland, and Palo Alto, California. The firm’s investments include life-sciences companies.

In addition to his service on pharmaceutical company boards, Gottlieb is a consultant for London-based pharmaceutical giant GlaxoSmithKline. If confirmed, he would not be the first FDA commissioner who has come to the agency carrying potential conflicts of interest. Robert Califf, a cardiologist who stepped down as FDA head in January, was also scrutinized for the ties to industry he forged over decades of running clinical trials in partnership with pharmaceutical companies.

In public statements, Gottlieb has argued that the FDA sometimes puts its drive for statistical rigour and well-designed clinical trials before the needs of patients. During a 2013 forum on drug approvals, Gottlieb pointed to an instance in which the FDA demanded a randomized, placebo-controlled clinical trial to evaluate a drug for a devastating rare genetic disorder called Hunter syndrome. The agency wanted the drug’s developer to enroll 96 patients in the trial — 20% of the US population that has the condition — and to measure impacts on clinical symptoms that took years to show up.

“What we can’t have is an FDA that’s ruled by statistics over medicine,” he said. “Americans deserve a less cautious FDA, and an FDA that actively embraces advances in science.”

That stance, and others, has drawn wide support for Gottlieb from the drug industry.  A February survey by the investment bankers Mizuho Securities USA in New York City found that 72% of executives from 53 drug companies surveyed preferred Gottlieb to Trump's other rumoured candidates for FDA chief.

Last year, when asked about the FDA’s efforts to regulate certain medical tests that are becoming more complex and integral to patient care, but are not now subject to agency oversight. Gottlieb said that to regulate all such diagnostic tests would slow innovation and make the tests more expensive. “Will the public-health benefits of having FDA oversight outweigh that impact of regulation,” he said. “I think that’s an open question.”

But in the same interview, Gottlieb acknowledged that some complex tests could merit regulation, and suggested that the FDA pinpoint those for regulation without trying to encompass the whole field. Whether and how the FDA will regulate these tests remains an open question: the agency has proposed guidelines outlining how it might do so, but has not yet finalized them. A new commissioner could be influential in their final form, says Michael Carome, director of the health research group at Public Citizen, a consumer-activist group in Washington DC.

The next commissioner could shape how industry can promote its drugs for uses other than those for which the drug was approved — another area in which the agency has yet to issue final guidance to industry.

The FDA commissioner will also be in a position to influence the next reauthorization of the FDA’s user fees, which is due to come before Congress later this year. That reauthorization, which takes place every five years, could be an opportunity for Congress to influence the FDA’s oversight on issues such as medical testing, or to speed up the FDA’s review of new drugs, says Carome. “A commissioner who supports a deregulatory approach could substantially influence that,” he says. “They play a very important role in framing that legislation.”

When this article was first published, Gottlieb's nomination was rumoured but not confirmed.