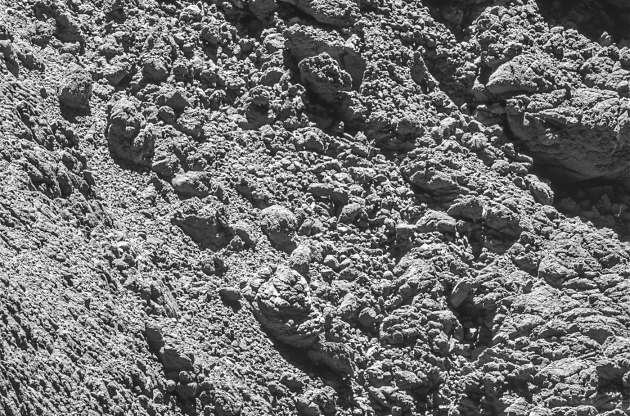 The lost lander is somewhere in this picture. Can you spot it?

The last resting place of the European Space Agency’s (ESA’s) comet lander Philae has been confirmed, less than a month before the end of the mission that saw it travel billions of kilometres from Earth.

Photographs taken by Philae’s mother ship Rosetta on 2 September clearly show the lander, including two of its three legs. The pictures, released on 5 September, confirm that Philae lies on its side in the shadow of a cliff, lodged in a crack, with one of its legs in the air. 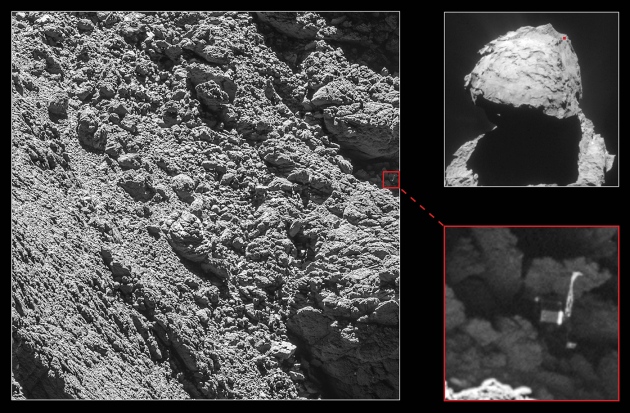 This image from ESA shows the lander itself.

Pinpointing Philae’s whereabouts and orientation should now help scientists to interpret the data that the lander beamed back to Earth during its short life, in particular, in refining data from CONSERT, a radio instrument designed to study the comet’s interior.

“This wonderful news means that we now have the missing ‘ground-truth’ information needed to put Philae’s three days of science into proper context, now that we know where that ground actually is,” Matt Taylor, ESA’s Rosetta project scientist, wrote on the agency’s blog.

Philae’s resting place had a huge impact on its mission. The lander’s tilted position meant that the comet’s surface partially blocked Philae’s antenna, making communication difficult, and the shady spot meant that the craft could not charge its solar panels, so Philae went into hibernation after just three days on the comet’s surface. After that, the lander made only sporadic but fruitless contact with Rosetta, and in July, ESA switched off Rosetta’s radio communications with the lander for good.

Philae, as seen from Rosetta as it departed for the surface of the comet.

The latest images — which have a resolution of 5 centimetres per pixel — come from a sweep of 67P/Churyumov–Gerasimenko made by Rosetta from its closest-ever distance from the surface, just 2.7 kilometres. They confirm a suspected sighting of Philae that was made in 2015 by combining images with data from Philae’s radio instrument.

Rosetta will now pass closer and closer to the surface as it prepares for a final manoeuvre that will send it crashing into the comet on 30 September.