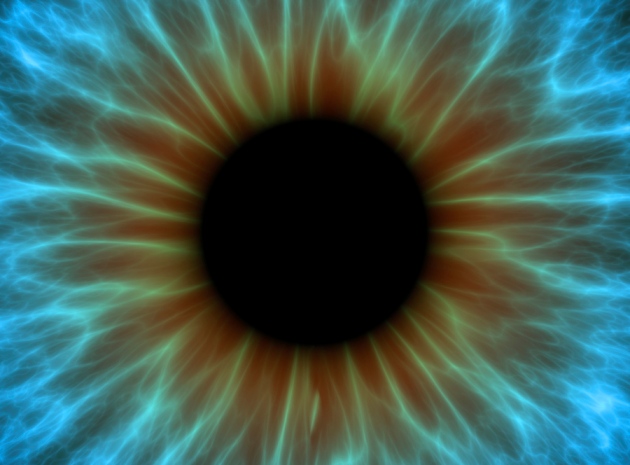 Human vision extends beyond what is conventionally known as the visible spectrum.

Although we do not have X-ray vision like Superman, we have what could seem to be another superpower: we can see infrared light — beyond what was traditionally considered the visible spectrum. A series of experiments now suggests that this little-known, puzzling effect could occur when pairs of infrared photons simultaneously hit the same pigment protein in the eye, providing enough energy to set in motion chemical changes that allow us to see the light.

Received wisdom, and the known chemistry of vision, say that human eyes can see light with wavelengths between 400 (blue) and 720 nanometres (red). Although this range is still officially known as the 'visible spectrum', the advent of lasers with very specific infrared wavelengths brought reports that people were seeing laser light with wavelengths above 1,000 nm as white, green and other colours.

Krzysztof Palczewski, a pharmacologist at Case Western Reserve University in Cleveland, Ohio, says that he has seen light of 1,050 nm from a low-energy laser. “You see it with your own naked eye,” he says. To find out whether this ability is common or a rare occurrence, Palczewski scanned the retinas of 30 healthy volunteers with a low-energy beam of light, and changed its wavelength. As the wavelength increased into the infrared (IR), participants found the light at first harder to detect, but at around 1,000 nm the light became easier to see. How humans can do this has puzzled scientists for years.

Do my eyes deceive me?

Palczewski wanted to test two leading hypotheses to explain infrared vision. The first suggests that when longer-wavelength light hits the collagen connective tissue in the eye, a small amount of its energy turns into photons of about half the light's wavelength, in a phenomenon called second-harmonic generation (SHG). The retina would then detect this visible light and fool the brain into thinking that it came directly from the source.

The other hypothesis is that infrared vision is a result of a phenomenon known as two-photon isomerization. Photoreceptor molecules in the eye absorb energy from individual photons in the conventional visible wavelengths. This prompts the molecules to change shape and trigger a chain of events that enables us to see. But if two photons each carrying half the energy — and therefore of twice the wavelength — hit the eye together, their energies could add up and perhaps trigger the same isomerization as does a single 'visible' photon.

To test the first hypothesis, Palczewski and his team removed collagen from mouse retinas, and measured their response to light of different wavelengths. But the mouse retinas responded to 1,000-nm lasers, just as human retinas with collagen do, suggesting that SHG within the eye was unlikely to be the answer.

Further evidence against the SHG model came when the researchers took crystals of the photoreceptor protein rhodopsin and shone infrared light on them. Under 1,000-nm light, the crystals changed colour from red to yellow. If SHG were causing the colour change, the spectrum of light emitted by these rhodopsin crystals would carry a tell-tale signature, but none was present.

Although the researchers do not yet have direct evidence that two-photon reactions power infrared vision, the team's computer simulations suggests that this is the case. Their quantum-chemistry calculations showed that rhodopsin can absorb two low-energy photons and kick into the same excited state as when it absorbs one photon of visible light. The same calculations also predicted that the double absorption should peak between 1,000 and 1,100 nm, something that the team's experiements confirmed. The results are published in Proceedings of the National Academies of Science1.

Qasim Zaidi, a perceptual neuroscientist at SUNY College of Optometry in New York, who has co-authored theoretical work that favoured SHG2, says he is pleased that the problem has been tackled experimentally, but he has not given up on a contribution from SHG. “I would like to see a straightforward experiment that rules out SHG in the human or primate eye,” he says.

Chemist Massimo Olivucci of Bowling Green State University in Ohio is impressed that Palczewski and his team worked from experiments with human participants right down to quantum-mechanical calculations. “The study provides strong evidence for two-photon absorption,” he says.

The next step is to look at exploiting this work. “An interesting possibility is to try to create mutants in the laboratory which would respond to IR light of even lower intensity,” says Olivucci.