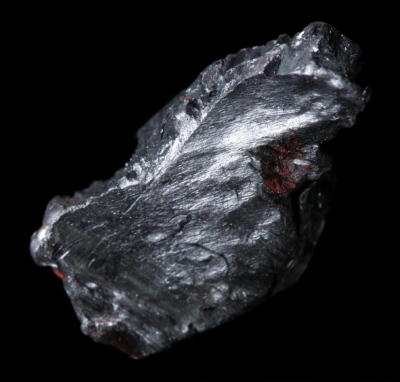 Black phosphorus is the source for sheets of the element just one atom thick.

Graphene, a one-atom-thick layer of carbon, has charmed materials scientists with its enticing electrical properties that allow electrons to flow freely across its surface. But the material lacks a natural band gap — a range of energy states in which electrons cannot exist freely — that could be used to switch this flow on and off. This reduces graphene’s usefulness as a replacement for the semiconductor switches in computer circuits.

Last month, research groups in the United States and China reported1, 2 on work towards a promising candidate that could fulfil both needs: phosphorene, an atom-thick layer of the element phosphorus that does have a natural band gap. The work is part of a trend that David Tománek, a condensed-matter theorist at Michigan State University in East Lansing, dubs the “post-graphene age” — in which researchers are exploring alternatives in the hope of overcoming graphene’s deficiencies. The rationale is that phosphorene might be useful for making thin, flexible electronics that could be more easily cooled than silicon ones.

Physicists have been studying black phosphorus — a layered material held together by weak chemical bonds — since the 1960s. But it was only last year that they began trying to isolate single layers. Just as in graphene, phosphorene atoms are arranged hexagonally, but in phosphorene the surface is slightly puckered. With its band gap, phosphorene can be switched between insulating and conducting states, and it is still flat enough to confine electrons so that charge flows quickly, leading to a relatively high mobility that is prized by electrical engineers.

Two groups, one1 led by Peide Ye of Purdue University in West Lafayette, Indiana, and the other2 by Yuanbo Zhang of Fudan University in Shanghai and Xian Hui Chen of the University of Science and Technology of China in Hefei, posted reports on a preprint server in January. They reported that they had stripped black phosphorus to two or three atomic layers by using sticky tape to peel the layers off a larger sample — the same method used in 2004 to isolate layers of graphene. Neither team has yet isolated a single layer of phosphorene.

There are reasons for optimism, however. Already, the groups have reported charge flows at speeds comparable with those in single layers of molybdenum disulphide, a semiconductor material with a band gap that has been tinkered with for nearly two decades. And phosphorene, unlike molybdenum disulphide, is made from a single element, so pure samples are, in theory, easier to obtain.

Phosphorene shares this purity with other post-graphene contenders such as silicene, made from silicon, and germanene, made from germanium. Although both of these are predicted to facilitate speedier charge flows than phosphorene, neither has a natural band gap. Both needs could be met by yet another mat­erial: stanene, a single layer of tin predicted by theorists3 in 2013 that has not yet been created.

A problem for all of these materials is their instability, because single layers can react with the air. Silicene, a favourite among post-graphene researchers, was stabilized in 2012, but it is still hard to prevent electrical interference from the metallic substrates it has to be grown on, says Patrick Vogt, a physicist at the Technical University of Berlin — so the applications imagined for silicene are a way off. “There is quite a lot of hype in this area,” he says.

Phosphorene seems more stable than its competitors, but it is not easy to produce: making black phosphorus entails putting the raw, powdered element under extreme pressure. Phaedon Avouris, a chemical physicist at IBM’s Thomas J. Watson Research Center in Yorktown Heights, New York, says that the latest results justify more study, but he suspects that phosphorene’s success in electronics will depend on whether researchers can find efficient ways to extract single layers and deposit them on substrates.

Sébastien Francoeur, a physicist at the Polytechnic Institute of Montreal in Canada, has already been seduced. He began working with black phosphorus after seeing the latest results. “A two-dimensional material that is a semiconductor is interesting technologically,” he says.