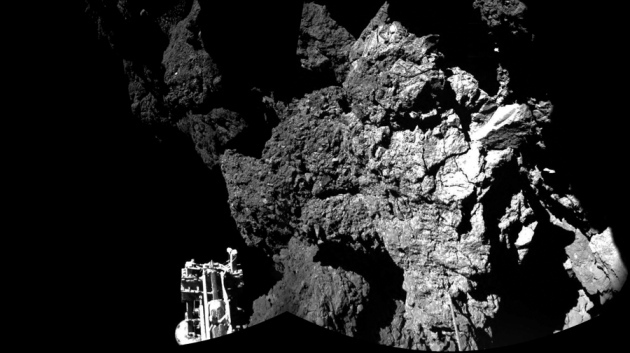 Philae sent this image back to Earth in November 2014, before its batteries ran out.

Philae, the space probe that made history when it landed on a comet in November 2014, is awake. The European Space Agency (ESA) announced on 14 June that it had received signals from the comet lander on 13 June at 22.28 Central European Standard Time. They were the first in more than seven months.

Excited scientists on the mission told Nature that Philae has probably been awake for a few days and that they hope the lander will start some low-risk science activities in the coming days — assuming that Philae makes contact again.

"Philae is doing very well: it has an operating temperature of –35 °C and has 24 watts available," said ESA project manager Stephan Ulamec of the German Aerospace Center (DLR) near Cologne, according to an ESA statement. "The lander is ready for operations."

ESA says that for 85 seconds, Philae 'spoke' with ground control through the spacecraft Rosetta, which is orbiting the comet 67P/Churyumov–Gerasimenko.

As the news got out that Philae had called home, mission scientists reacted on Twitter. “I’m in tears again … can it be true?” wrote Monica Grady, a planetary scientist at the Open University in Milton Keynes, UK, and a co-investigator on Philae's chemical analyser, Ptolemy.

The news ends months of speculation over whether the washing-machine-sized lander would ever regain contact with Earth (see 'Five factors that will decide if Philae wakes').

Philae ran out of power on 15 November, just three days after it bounced on to the comet following a perilous descent. Stuck in the shade, it was unable to charge its solar-powered battery and entered hibernation.

Ever since, scientists have consoled themselves with the hope that the craft is not dead, just sleeping, and that it would regain power as the comet neared the Sun.

ESA also says that Philae sent back historical data showing that the comet lander was awake earlier, but had been unable to make contact. According to ESA, there are data in Philae’s memory that will shed light on “what happened to the lander in the past few days”. ESA is now waiting for the next contact from the spacecraft.

The available power — 24 watts — is a “good amount”, says Koen Geurts, a member of the landing team at the DLR. “It’s more than enough to communicate and to do science activities,” he says. Philae has probably been awake for several comet days, each lasting 12.4 hours, but it is not yet clear how many, he adds.

Assuming that the connection with Philae reopens, the first science in coming days will probably be low-risk activities, he says, such as taking images and turning on the ROMAP instrument, which measures the comet’s magnetic field. 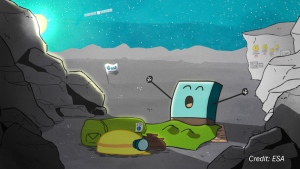 The lander team was growing concerned about Rosetta’s ability to fly in close enough to hear from Philae, given the increasing dust and gas activity as the comet flew nearer to the Sun. “There was a general feeling that if Philae doesn’t wake up soon it might become too late. We were all delighted when we got the phone call last night,” says Geurts.

Members of the lander team are currently trying to understand why the link-up from Philae was shorter than they would have predicted: instead of a two-hour-long connection, it lasted only about two minutes. This might be due to uncertainties in Philae’s orientation, or the lander may have moved since it sent its last data in November, says Geurts.

The team in charge of the Rosetta orbiter, which passes the signals from Philae to Earth, will now focus on maximizing the connection, says Matt Taylor, ESA project scientist for the Rosetta mission. “We have to update how we think the lander is oriented when the orbiter comes past,” he says.

In the short term, Rosetta will change its planned orientation to point directly at the lander, he says, adding that in the long term, the orbiter might eventually change trajectories to aid communications. "There are still a lot of things to be confirmed with respect to the health of the lander and what we can learn from it. But everyone is very excited,” he says.

News of Philae's revival comes days after reports of a possible sighting of Philae on comet 67P/Churyumov–Gerasimenko. Although scientists knew that Philae had landed in November, they did not know where it had ended up because the touchdown was rough and the probe bounced twice.

This article has been updated since it was first posted to include information from interviews with Koen Geurts and Matt Taylor, and a tweet from Monica Grady.