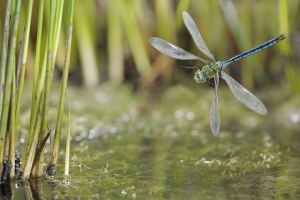 Pesticide use can reduce the biodiversity of insects such as the emperor dragonfly (Anax imperator).

Pesticide use has sharply reduced the regional biodiversity of stream invertebrates, such as mayflies and dragonflies, in Europe and Australia, finds a study published today in the Proceedings of the National Academy of Sciences1.

Previous research has shown similar decreases in individual streams, but the study by Mikhail Beketov, an aquatic ecologist at the Helmholtz Centre for Environmental Research in Leipzig, Germany, and his colleagues analysed the effects of pesticides over broad regions.

The team examined 23 streams in the central plains of Germany, 16 in the western plains of France and 24 in southern Victoria, Australia. They classified streams according to three different levels of pesticide contamination: uncontaminated, slightly contaminated and highly contaminated.

Moreover, the authors say that diversity decreased at pesticide concentrations that European regulations deem environmentally protective. "It shows our risk assessments don't work," says Beketov. "I think we should care about this because invertebrates are an important part of the food web."

Emma Rosi-Marshall, an aquatic ecologist at the Cary Institute of Ecosystem Studies in Millbrook, New York, says that she finds the results compelling. "We are at a crisis point, with species loss on a global scale, especially in freshwater ecosystems. Considering pesticides along with other known threats to biodiversity may be crucial for halting species declines," she says.

But toxicologist Keith Solomon of the University of Guelph in Ontario, Canada, says he has concerns about the study's sample size. "It begs the question as to what is happening in all the other streams out there," he says. "If these streams are representative of the worst case, then the effects may only be confined to these types of scenarios and not apply to the entire environment."

The second paper, from biologist Dave Goulson of the University of Sussex, UK, reviews the environmental risk posed by neonicotinoid insecticides2. Its publication on 14 June in The Journal of Applied Ecology comes soon after the European Commission's April announcement of a two-year ban on three commonly used neonicotinoids over concerns that they are killing bees.

Goulson's work includes data from agrichemical companies and suggests that neonicotinoids accumulate in soil at levels that can kill soil invertebrates such as Eisenia foetida, a type of earthworm.

Goulson's review also cites earlier studies suggesting that grain-eating birds such as partridges may be dying after eating as few as five seeds treated with neonicotinoids. The insecticide is most often applied as a seed dressing to crops such as maize and soya beans. "The very strong focus on bees has perhaps blinded people to the broader implications," Goulson says.

Both papers demonstrate the importance of conducting ecosystem assessments after pesticide use, says ecotoxicologist Ken Drouillard of the University of Windsor in Ontario, Canada. "We can't think our job is done after the [pre-application] risk assessment," he says. "Unfortunately during a global economic crisis, budget cuts come at the cost of ecosystem health monitoring."