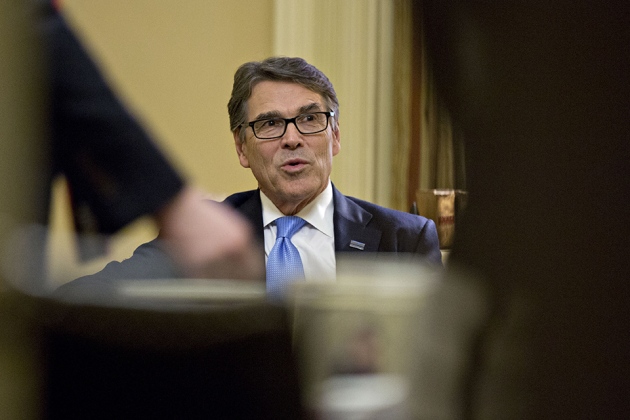 Rick Perry once sought to abolish the department that he is now nominated to lead.

Former Texas governor Rick Perry says that he will defend scientists at the US Department of Energy if he is confirmed as the agency’s next leader.

Perry, president-elect Donald Trump’s pick for energy secretary, also says that he would base decisions on “sound science”. And he disavowed a questionnaire from the Trump transition team that sought the names of agency employees who had worked on climate policy.

“I am going to protect all of the science, whether it’s related to the climate or other aspects of what we’re going to be doing,” Perry told a Senate committee on 19 January, during a hearing on his nomination. “I am going to protect the men and women of the scientific community from anyone that would attack them, no matter what their reason may be, at the Department of Energy.”

Perry also said that he regrets calling for the abolition of the agency in 2012, when he was vying for the Republican presidential nomination. He told lawmakers that he is “excited and passionate” about advancing the core missions of the department, from maintaining and modernizing the nuclear-weapons stockpile to advancing modern energy technologies.

In the hot seat

Democrats on the Senate committee pressed Perry about past statements in which he questioned mainstream climate science. The nominee told them that he thinks global warming is happening.

“I believe some of it is naturally occurring, but some of it is caused by manmade activity,” Perry said. “The question is how we address it in a thoughtful way that doesn’t compromise economic growth.”

That did not entirely satisfy Democrats, including Senator Maria Cantwell of Washington state. “I guarantee you today that we are compromising economic growth because of our overdependence on fossil fuels,” she told Perry.

Cantwell said that the science under way at the energy department will be critical to understanding the impacts of rising greenhouse-gas levels in the atmosphere — from the melting of Arctic sea-ice to ocean acidification — and to maintaining US leadership in clean-energy technologies.

Perry cited his own record as governor of Texas from 2000 to 2015, when the state led the nation in the expansion of wind energy, thanks to his support for oil and gas development. He said that, as energy secretary, he would advocate for all forms of energy, including renewable sources.

Perry also seemed to acknowledge concerns from researchers who say he has no experience with basic science or nuclear weapons, both of which are at the core of the department’s mission. “My desire is to lead this agency in a thoughtful manner, surrounding myself with expertise on the core functions of this department,” he said. He promised to “protect and modernize” the nation’s nuclear-weapons arsenal.

Aside from waffling a bit on questions about the wisdom of nuclear-weapons testing and whether climate change represents a global crisis, Perry generally said the right things, says Michael Lubell, a physicist at the City College of New York. The most important of these, Lubell says, were Perry’s backtracking on his proposal to abolish the energy department and his disavowal of the Trump transition team’s questionnaire.

But Lubell added that, given the nominee’s lack of experience, much will depend on whom Perry surrounds himself with and how much freedom Trump gives him to make decisions on budget and policy decisions. “He may be constrained by the White House,” Lubell says. “It’s too early to tell.” ​