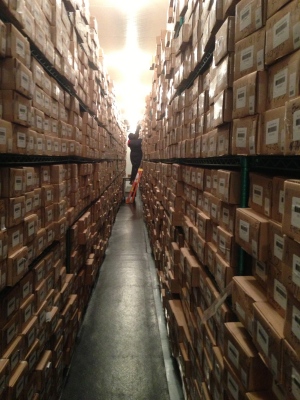 Nestled inside a generic-looking office building here in suburban Maryland, down the hall from cable-provider Comcast, sits the largest blood serum repository in the world.

Seven freezers, each roughly the size of a high school basketball court, are stacked high with row upon row of small cardboard boxes containing tubes of yellow or pinkish blood serum, a liquid rich in antibodies and proteins, but devoid of cells. The freezers hover at –30 degrees Celsius—cold enough to make my pen dry up and to require that workers wear protective jumpsuits, hats, gloves and face masks. Four more empty freezers, which are now kept at room temperature, await future samples.

The bank of massive freezers—and its contents—is maintained by the Department of Defense (DoD). The cache of government-owned serum may provide unique insights into the workings of various maladies when linked with detailed information on service members’ demographics, deployment locations and health survey data. New research projects tapping the precious serum could lead to breakthroughs in some of the hottest topics in military research—including the hunt for biomarkers for post-traumatic stress disorder and suicide risk. But DoD’s policy of keeping its samples in perpetuity—even after troops leave the force—could raise a few eyebrows.

The military started collecting serum samples 28 years ago as a by-product of its HIV surveillance. Since then serum has been routinely collected from leftover blood from HIV tests or standard post-deployment health check-ups and then frozen for future reference. Now the Department of Defense Serum Repository (DoDSR) has swelled to include 55.5 million samples of serum from 10 million individuals—mostly service members, veterans or military applicants. The armed forces use DoDSR for general health surveillance to track infectious diseases and to shape health policies. But the repository is also ripe for targeted research programs.

Annually the facility may field as many as 100 requests to use some of the serum from that icy reserve. Sixty-two requests received the green light to sample from DoDSR last year, half of them for research and half for clinical testing of an individual patient’s samples. In the past five years DoDSR has filled 278 such requests. But not all DoDSR uses are medical: they have also played a role in criminal proceedings, serving as a reference point for female victims in two rape cases, says Mark Rubertone, who oversees the DoDSR. “The value of the specimens does not go away, even after [service members] leave the military,” he says.

Even with the promise of ongoing health surveillance and potential research that would benefit the force, not all contributors to the repository are enthusiastic about—or even necessarily aware of—their participation. DoDSR does not discard serum samples, even if individual service members or military applicants request that their samples be removed. Fewer than 10 individuals have asked for the removal of their samples, according to Rubertone. But the requests are likely rare because service members and their families are not actively aware of the serum, even though they may know that their blood—in one form or another—is on file, Rubertone acknowledges. Thus far, no one has successfully retrieved his or her biological materials from the facility.

A RAND Corp. report on the facility, published in 2010 (after an earlier draft was revealed via Wikileaks), pointed out that nearly 900,000 samples in the repository were not from active duty or reservist personnel—they were from so-called “dependent beneficiaries” in service members' families. Those numbers have since grown, to a “couple million” samples, according to the DoDSR count. The biological material from military family members often ends up in the repository after beneficiaries receive pregnancy care or visit a sexually transmitted infection clinic. The data accompanying those samples are more sparse and so the serum specimens are not as useful for studies, although they are still kept in the repository. Another 4 percent of the samples come from civilians who applied for military service but did not join.

Researchers who draw on the serum bank note that the wealth of longitudinal data from DoDSR enables cutting-edge research. Take, for example, several projects that are searching for biomarkers of post-traumatic stress disorder. By matching up pre- and post-deployment DNA from individuals who developed PTSD and also comparing the genetic material with DNA from a control population, researchers are hoping to discern clues about when and how PTSD becomes apparent at a genetic level, impacting the DNA building blocks via DNA methylation and perhaps the silencing of certain genes. Related work is also focusing on microRNA—a small, noncoding RNA molecule—that helps regulate numerous biological processes and serves as a fingerprint for disease development.

Meanwhile, other researchers are studying serum to garner clues about links between traumatic brain injury (TBI) and DNA methylation among individuals who served in Iraq and Afghanistan, gleaning information from samples on 150 service members with mild to severe TBI, along with 50 control subjects. Because individuals—both on and off the battlefield—can suffer from mild TBI and not know it, identifying a biomarker could help speed up clinical care, says study investigator Jennifer Rusiecki, an epidemiologist at Uniformed Services University of the Health Sciences in Bethesda, Md.

Without the serum available through DoDSR and its accompanying information, some of this work would likely be impossible. “I’m not aware of other banks that have this data,” Rusiecki says. All told, almost 75 publications have depended on data gleaned from the samples in these freezers. Still more projects have drawn on them but did not make it into print. And because the repository’s stated purpose is health surveillance, the samples would not be chucked even if all the studies were halted, DoDSR’s Rubertone says.

The military has instituted safeguards to prevent misuse of the serum reserve. All studies conducted with DoDSR serums are required to have a military co-investigator, a policy DoD put in place to help ensure that the serum is being used for military-relevant purposes. Researchers must also receive approval from their home institutions’ institutional review boards, groups that ensure investigators will guard patients’ confidentiality and adhere to ethical research principles.

Unfortunately, despite the scale of the military repository, blood serum has its limits as a medical resource. For research and health surveillance, the serum can only tell you so much, says Capt. Kevin Russell, the director of the Armed Forces Health Surveillance Center that oversees DoDSR. Because the serum samples are not linked to very specific exposure information—such as exactly where a service member was stationed or what he or she encountered while deployed—they only stand in as a surrogate for exposure. At the moment DoD is exploring whether other materials—urine, throat cultures, blood clots—or perhaps new technologies could enhance their repository. Nevertheless, it would be “unlikely” that Defense would get rid of its serum reserve or stop adding new samples, Russell says. And so four freezers remain empty, waiting.