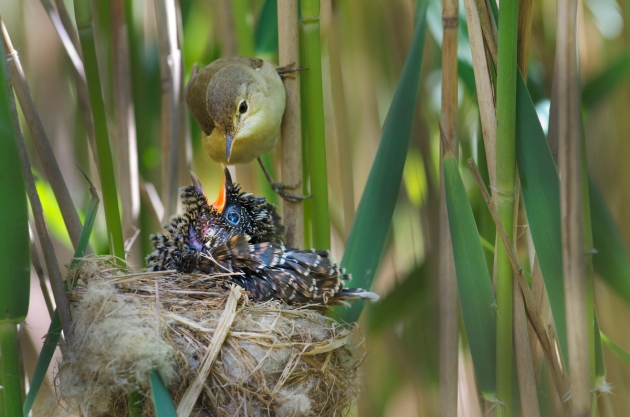 Cuckoos are notorious for laying their eggs in other birds' nests. But their hosts are fighting back against this parasitic behaviour by evolving tell-tale signatures on their eggs, helping the host birds to spot an intruder. Using pattern-recognition software, researchers have now investigated the various strategies that host birds use to produce these signatures, also shedding light on how birds process visual information.

The common cuckoo (Cuculus canorus) can produce eggs that mimic the appearance of a host’s eggs, allowing the invaders to go undetected in the nest. Cuckoos usually hatch before the host’s own brood, and will kick out the host’s eggs or chicks. To avoid inadvertently raising intruders, the hosts have to identify cuckoo eggs and remove them before they hatch.

“Now we know that host birds can employ their own defences, just as a bank adds special watermarks to its dollar bills,” says evolutionary biologist Mary Caswell Stoddard of Harvard University in Cambridge, Massachusetts, who is first author of the study published last week in Nature Communications1.

Stoddard and her colleagues photographed 689 host-species eggs from the collections of the Natural History Museum in London, using a camera that detects the same wavelengths that can be seen by birds. Using image analysis, the team then converted each photograph so that the image represented what a bird might actually see (see picture below). The eggs came from eight species of birds known to be targeted by the common cuckoo, ranging from bramblings (Fringilla montifringilla) to great reed warblers (Acrocephalus arundinaceus). 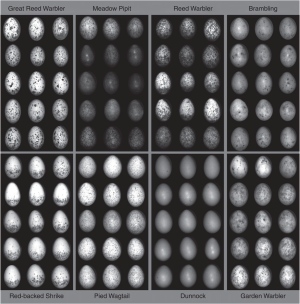 The patterning styles on the eggs of eight different species that are parasitized by the common cuckoo (click to enlarge).

To determine how a bird might see and process the patterns on its eggs, the researchers created NaturePatternMatch, a pattern-recognition algorithm that analyses eggshell patterns in the same way that a bird is thought to evaluate visual information.

For each species, the team used the software to compare eggs from the same clutch and from clutches laid by different females. The scientists found that most of the host species' eggs had distinctive signature patterns, and that the patterns were more sophisticated among species that have been most exploited by the common cuckoo. For these hosts, a good signature seems to make it easier to recognize a cuckoo egg among their clutch and to reject it, says co-author Rebecca Kilner, an evolutionary biologist at the University of Cambridge, UK.

The scientists also found that different host species have different strategies to fight cuckoo invaders. The red-backed shrike (Lanius collurio), for instance, has evolved egg patterns that are highly repeatable within a single clutch, while the markings on the eggs of the great reed warbler differ drastically from female to female. Other host species have evolved egg patterns with a high degree of spatial complexity. The brambling, for example, lays eggs with sparse markings that are unevenly spaced — a feature which makes for a very good signature, says Kilner.

The results show that, contrary to theory, host species don't have to use all three strategies at once for patterns to be recognizable: patterns can be complex or repeated within a clutch, or different between clutches of the same species. Each approach individually helps to make the host species' eggs more recognizable, thus enabling the host birds to reject cuckoo eggs.

Ecologist James Dale of Massey University in North Shore, New Zealand, who was not involved in the study, says that the software “shows a really promising way forward for understanding visual recognition behaviour, not just in brood parasite situations, but in general”.

However, biologist David Lahti at the City University of New York cautions that researchers cannot be sure how well a computer program mimics the cognitive processes of animal brains. “But we need to start somewhere,” he adds. “No doubt researchers like myself will be running out to the field soon to test these new hypotheses in our own systems.”