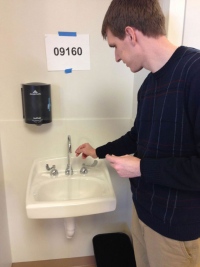 Researchers swabbing a hospital in Chicago found around 70,000 types of microbe before the facility even opened.

When people check into a hospital, the microbial communities that coat their bodies quickly colonize treatment areas, according to a research consortium based at the University of Chicago in Illinois.

The finding is the first from the Hospital Microbiome Project, a year-long effort to monitor the microbial ecosystem of a new University of Chicago hospital to see how microbes including pathogens travel through its halls.

Research began before the hospital opened its doors. Since January 2013, researchers have taken weekly swabs of light switches, floors, airways, water systems and bed rails at the Center for Care and Discovery in Chicago, to collect genetic material that can identify microbial inhabitants. When the hospital opened to patients and staff in February, researchers started swabbing them too, collecting samples from their noses, armpits, faeces and hands — testing some individuals on a daily basis. Sampling will continue until the end of the year, by which point the scientists expect to have collected more than 15,000 swabs.

The team has gathered 4,500 samples so far, and has analysed only about 600, but preliminary results show that the microbe community changed within days after the hospital opened its doors. “Humans are rapidly having a big impact,” says lead researcher Jack Gilbert, an environmental microbiologist at the University of Chicago, who will present the results today at the Conference on the Microbiology of the Built Environment in Boulder, Colorado.

After sequencing DNA collected on the swabs, Gilbert and his team identified around 70,000 types of microbe that had moved in during construction, probably transported by air, water and construction materials and workers. After the hospital opened, patients and staff contributed new strains of microbes from their skin and shoes, altering the invisible ecosystem.

Gilbert and his team found significant differences between microbial communities in individual hospital rooms. Patients who stayed for only short periods, such as those undergoing elective surgery, had a transient influence on their rooms’ microbial communities; after cleaning, the rooms reverted to a pre-patient state. Microbes from long-term patients — including people with cancer or those who had received organ transplants — had time to settle into the rooms. The patients' microbial fingerprints lingered after they checked out of the hospital and their rooms were cleaned.

But even in areas with long-term inhabitants, Gilbert’s team has found no lingering pathogens. “Over the first four months of observations, we’ve seen nothing that concerns us,” he says.

Still, roughly 1.7 million hospital-associated infections are reported each year in the United States, and the pathogens that cause them must come from somewhere. It is possible that harmful germs will eventually gain a toehold in the Chicago hospital, says Mark Hernandez, an environmental engineer at the University of Colorado Boulder. Some patients will shed pathogens as well as harmless bacteria, he says.

The project's results provide an early glimpse of how the hospital microbiome works, but Thomas Schmidt, a microbial ecologist at the University of Michigan in Ann Arbor, warns that more research is needed to investigate what these patterns might mean for patients.

Some of that research is likely to come from Gilbert’s team. The consortium hopes to conduct microbiome studies at further new hospitals, as well as older medical facilities.