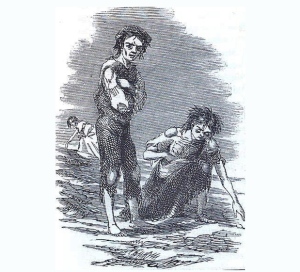 The population of Ireland has yet to rebound from the deaths and migrations caused by the famine of mid-19th-century.

The great potato famine of the 1840s was a defining event in Ireland’s recent history. An Gorta Mór — the Great Hunger in the Irish language — caused millions to starve or emigrate and helped catalyse the country’s bloody war of independence from Great Britain.

Working from 150-year-old dried leaves, two competing teams have now sequenced the genome of the single-celled organism that wreaked havoc on the Irish potato crop. It is the first ancient plant pathogen to have its genome decoded. (In 2011, scientists reported the sequence of the plague-causing bacteria responsible for the Black Death of the 1340s.)

Phytophthora infestans, which causes potato late blight, is an oomycete — a type of single-celled organism related to brown algae. Carried by infected potatoes, the disease probably arrived at the port of Antwerp in Belgium in the summer of 1845, before quickly spreading through the Low Countries and much of western Europe.

Ireland’s dependence on potatoes was the reason the epidemic exacted a far greater toll there than it did on the rest of the continent. Irish peasants working plots owned by absentee British landlords relied on potatoes for most of their calories, says Detlef Weigel, a plant geneticist at the Max Planck Institute for Developmental Biology in Tübingen, Germany, who co-led a study published today in the journal eLIFE1. “The potato is really an amazing staple crop. If you have a diet of potato and milk, you don’t need anything else.”

The disappearance of that staple had devastating consequences, including 1 million deaths and still more emigrations. Ireland’s population of 4.5 million is still less than three-quarters of its pre-famine level. The perception that Britain did little to intervene in the catastrophe helped foment Irish nationalism, eventually resulting in the Irish War of Independence in 1919.

A blight across the Earth

Long before it hit Europe, P. infestans probably circulated in the Toluca Valley in central Mexico, where it infected wild relatives of the potato. Until recently, only a single strain of P. infestans, dubbed US-1, plagued potatoes outside Mexico and South America. So it came as a surprise when, in 2001, scientists suggested that a different strain was responsible for the famine, after analysing a short stretch of P. infestans DNA from herbarium archives2.

Weigel’s team went to herbaria in Kew Gardens, outside of London, and at Germany’s Botanische Staatssammlung in Munich and sequenced DNA preserved from the dried leaves of infected plants dating between 1845 and 1896.

Mitochondrial genomes from the famine strains showed they were more closely related to the US-1 strain than the earlier research suggested, and that the two strains diverged only in the early 1800s. Weigel says the split probably occurred in the United States, before the strain responsible for the famine was imported to Europe. That strain now appears to be extinct, or perhaps restricted to small pockets of the world.

Weigel’s team also found nothing in the nuclear genomes of the famine strains to explain their ferocity. In fact, the strains lack a gene found in modern strains of P. infestans that overcomes the plant’s resistance genes. And, surprisingly, the famine strain seems less lethal than the P. infestans strains that now cause US$6 billion in crop damage per year. “It seems rather that the potatoes were unusually susceptible,” he says.

Meanwhile, a team led by Tom Gilbert and Mike Martin, evolutionary geneticists at the University of Copenhagen, looked more closely at such genes after sequencing the nuclear genomes of five herbarium strains of P. infestans. In unpublished work, the team identified numerous genes that differ between the historical samples and modern strains, including many disease genes that were missing from the famine strains. Their work also suggests that P. infestans may have been exported to Europe more than once during the famine.

“What happened was that this pathogen had never seen cultivated potatoes before,” says Bill Fry, a plant pathologist at Cornell University in Ithaca, New York. It spread through potato fields like wildfire in Ireland and other countries where potatoes were grown intensively. “It destroyed the tops, it destroyed the tubers, and there was nothing for this very poor part of the population to eat.”