Although women are publishing more studies, being cited more often, and securing more coveted first-author positions than they were in the mid 1990s, overall progress towards gender parity in science varies widely by country and field. This is according to a massive report released on 8 March that is the first to examine such a broad swath of disciplines and regions of the world over time (see 'Slowly but surely').

The report1 by the publisher Elsevier found that despite their moderate advances, women still published fewer articles than men, and were much less likely to be listed as first or last authors on a paper. Citation rates, however, were roughly equal: although female authors were cited slightly less than male authors, work authored by women was downloaded at slightly higher rates.

Elsevier used data from Scopus, an abstract and citation database of more than 62 million documents. The report’s authors broke the data down into 27 subject areas, and compared them across 12 countries and regions and two 5-year blocks of time: 1996–2000 and 2011–15. The report included only researchers who were listed as an author on at least one publication within either of the two five-year periods. 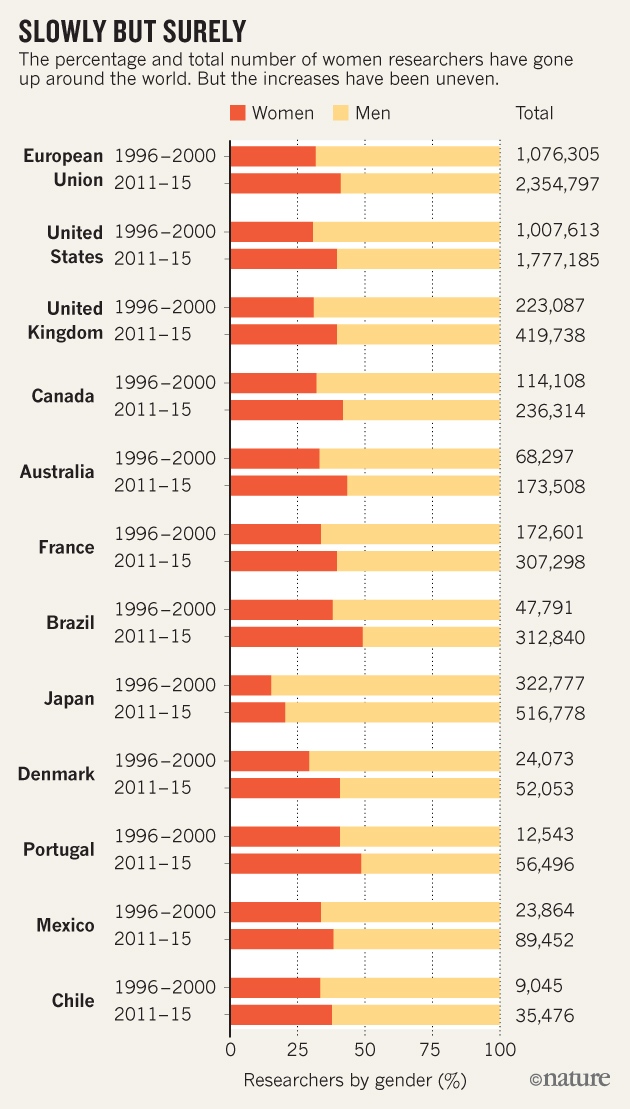 Although women might be publishing less research, the citation rates indicate that their work is equally scientifically important, says Holly Falk-Krzesinski, vice-president of global academic and research relations at Elsevier who is based in San Diego, California.

However, Cassidy Sugimoto, an information scientist who studies gender disparities at Indiana University Bloomington, notes that she would expect to see men and women cited at similar ratios because many papers have multiple authors representing more than one gender. The small number of female first authors, she says, reflects the inequalities that still exist in science today.

“I think this report does a tremendous job of demonstrating and reinforcing that the leaky pipeline is still in effect,” says Sugimoto, referring to the decline seen in the proportion of women at succesive stages in research. “We see an increase in the number of women researchers and an increase in the number of women first authors, but those rates are not progressing equally. We have a pipeline problem, and time is not erasing it.”

But patching that pipeline has proved extremely difficult. Women must overcome a number of barriers in science, says Sugimoto, ranging from conscious and unconscious sexism to expectations of women’s roles in child care and care for the elderly.

In response to its own findings, Elsevier has been addressing issues of gender imbalance on its journal boards by setting benchmarks for the number of men and women included on them. But Sugimoto cautions that simply putting women in positions to review papers may not solve the problem: in some studies, she says, women in science were just as likely to discriminate against other women when hiring as men were2, although other studies have failed to find such hiring bias3.

This report confirms the results of many past studies on gender disparities in research, says Shulamit Kahn, an economist at Boston University in Massachusetts who studies gender differences in science. But the multinational, multidisciplinary scope of this study allows for more in-depth analysis, she says. 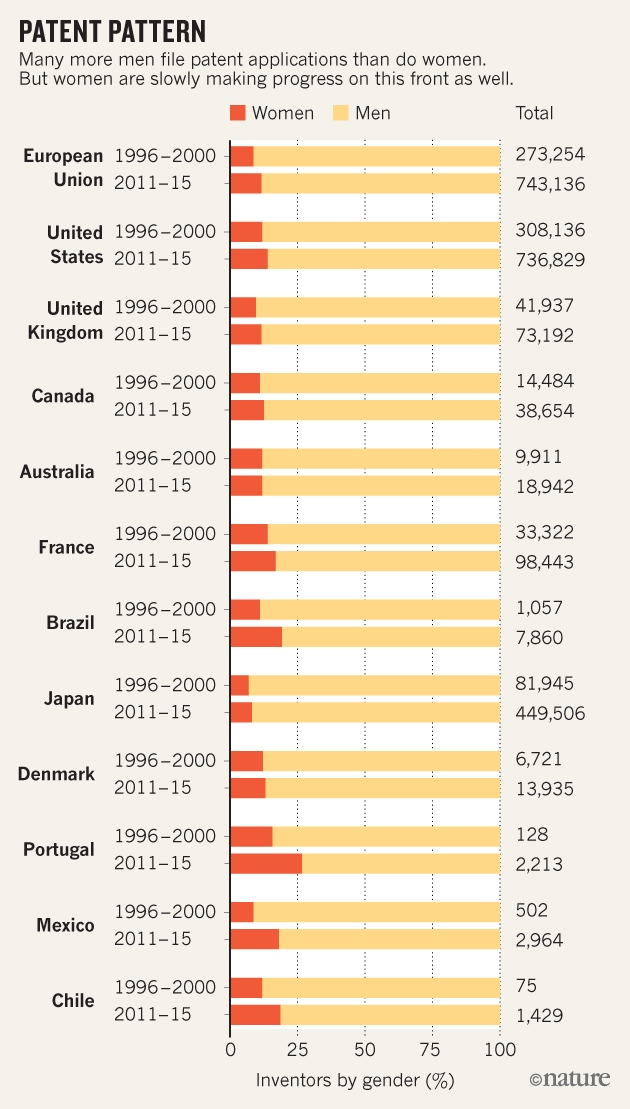 Although the overall proportion of women in science has grown, the rates have hardly been equal across countries or disciplines. In Japan, the proportion of female researchers rose by only 5% between the two study periods, whereas in Brazil, it rose by 11%. Women were also represented unequally in different scientific fields. Although they were strongly represented in life and biomedical sciences, few women specialized in the physical sciences. And when the report analysed patent data from the World Intellectual Property Organization, they found that only 14% of people filing patent applications in 2011–15 were women (see 'Patent pattern').

“What our report demonstrates is that gender disparities aren’t the same all over. What works to fix them in one place and one field might not work in another,” says Falk-Krzesinski.