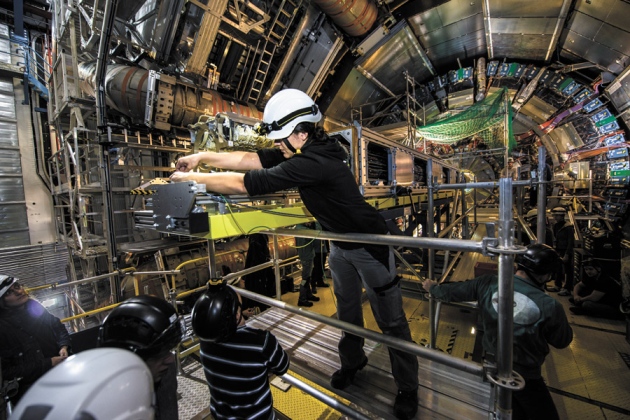 Particle-physics research is at the centre of a global push for open-access publishing.

January sees the start of what has been billed as the largest-scale open-access initiative ever built: an international effort to switch the entire field of particle physics to open-access publishing.

But the initiative, organized by CERN, Europe’s high-energy physics laboratory near Geneva in Switzerland, has not yet fulfilled its dream — it currently covers only a little more than half of published particle-physics papers.

The scheme’s scope was slashed in the summer when the field’s largest journal, Physical Review D, pulled out, although its publisher, the American Physical Society (APS), did agree to publish papers on experiments at CERN’s Large Hadron Collider on an open-access basis without charging author fees.

And as the starting gun sounded, a number of US libraries, including those of Stanford University in California and Yale University in New Haven, Connecticut, declined to pay into the system. Robert Schwarzwalder, associate university librarian for Stanford’s science and engineering libraries, wants to see open-access research but is not sure that CERN’s initiative is needed, given that versions of almost all high-energy physics articles already appear online for free on the preprint server arXiv and the repository INSPIRE-HEP. Yale did not return Nature’s calls.

In the global scheme, called the Sponsoring Consortium for Open Access Publishing in Particle Physics (SCOAP3), libraries either pay reduced subscription fees for participating journals, or stop paying them altogether. The cash saved goes into a central SCOAP3 fund, used to pay publishers up front to publish open-access articles.

Instead of hiding articles behind paywalls, publishers will make them immediately available on their own websites, with generous rights for reuse. Authors will retain the copyright. Libraries will not necessarily save money, because the average fee for publishing a paper — €1,150 (US$1,570) — has been set roughly to match publishers’ lost subscription revenues. But in three years’ time, contracts may be renegotiated, so open-access fees might go down.

“Being able to flip four out of the five large journals to open-access publishing is a remarkable result.”

SCOAP3 was designed to flip journals to open access without disrupting researchers’ funding arrangements: scientists would not have to pay fees from their own research grants. In 2012, after more than 6 years of discussion with over 1,000 libraries, library consortia and research organizations in 25 countries, 12 journals signed up to the scheme. Six agreed to switch entirely to open-access models and six to publish particle-physics articles in an open-access format. It was “the most systematic attempt to convert all the journals in a given field to open access”, says Peter Suber, director of the Harvard Open Access Project in Cambridge, Massachusetts.

Then, in June 2013, the APS announced that it would pull out of the scheme, taking with it two journals, including Physical Review D, which publishes more than 3,000 high-energy physics articles each year behind a paywall, although it also allows authors to pay to make individual articles open access. The APS says that it is committed to “sustainable open access”, and notes that it allows authors to post the final manuscripts of APS papers on their own websites. But the society wanted to maintain its “long-term financial stability”, it said. “The data available to us did not allay our long-standing concerns about the stability of SCOAP3 and about the risks to Physical Review D from participating,” says Joseph Serene, treasurer and publisher for the APS in College Park, Maryland.

Salvatore Mele, who leads SCOAP3 from CERN, says he regrets the APS decision, which has sparked a minor stand-off. CERN is revising its publishing policy, and expects to see an increase in the number of papers based on its research that are published open access. But the organization says it will not pay open-access fees for journals that either withdrew from or remained outside the SCOAP3 process. The APS says that — apart from papers relating to the Large Hadron Collider — it will not waive open-access fees for CERN, so it will be up to individual authors to find the money.

Schwarzwalder is also concerned about the long-term viability of the scheme. The danger, he says, is that libraries may be tempted to renege on their pledges in order to save money — because they will have access to the papers whether or not they pay. Libraries that do not pay into SCOAP3’s €5-million pot will also effectively be freeloading on those that have. This could rapidly make SCOAP3’s publishing economically unsustainable. Nevertheless, Schwarzwalder says Stanford is now reconsidering its decision.

Despite all the teething pains, Mele considers SCOAP3 a success. It has created a worldwide community of funding agencies and libraries that believe it is possible to convert subscription fees into open-access fees. “Being able to flip four out of the five large journals to open-access publishing — which was considered to be impossible — is a remarkable result.”

This article originally stated that CERN has decreed that all articles based on its research must be open access. In fact, it is still reviewing its policy, and the text has been corrected to reflect this.