Even in death, the world’s most accomplished parrot continues to amaze. The final experiments involving Alex — an African grey parrot (Psittacus erithacus) trained to count objects — have just been published.

They show that Alex could accurately add together two Arabic numerals to a sum of eight and the total number of objects under three cups, putting his mathematical abilities on par with (and maybe beyond) those of chimpanzees and other non-human primates. The work appears in the journal Animal Cognition. 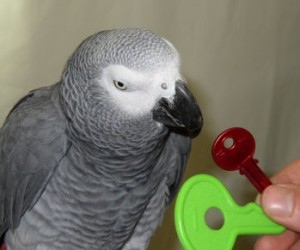 Alex the parrot could add Arabic numerals to a sum of eight.

Alex gained world renown for his ability to learn and voice labels for dozens of different objects and concepts, such as colour, size and quantity. His primary trainer, Harvard University psychologist Irene Pepperberg, even reported that Alex understood a “zero-like” concept.

In early September 2007, Alex said to Pepperberg: “You be good. I love you. See you tomorrow.” The next day, the 31-year-old parrot was found dead of what was determined to be a heart event, probably related to hardened arteries (see Farewell to a famous parrot).

Pepperberg and her colleagues had been testing Alex on a series of tasks pushing the limits of his mathematic prowess.

In previous work, the parrot gave hints that he could add objects. For instance, when presented with a tray containing four green, three red and five blue blocks and asked “what colour five?”, Alex would respond “blue”, suggesting that he had totted up the blocks of different colours.

But Pepperberg didn’t get the idea to probe Alex’s ability to add until she was testing whether another parrot named Griffin could equate sound sequences with quantities. She played two clicks, hoping Griffin would squawk “two”, but he said nothing. After two more clicks, Alex, who was in the same room, chimed in with “four”, two more clicks and Alex said “six”.

“I just looked at him and said you want to do addition? Fine,” Pepperberg says.

She discovered that Alex could accurately add two sets of objects, such as crackers or jelly beans, as long as the total was six or less. In related work, Alex learned to order correctly the Arabic numerals 1 through 8 (in the form of multicoloured refrigerator magnets). She says he then spontaneously learned to equate these symbols with the appropriate number of objects.

In the latest work, Pepperberg tested whether Alex could add the Arabic numerals and also whether he could sum three sets of objects totalling six or less. Both experiments were cut short when Alex died, but Pepperberg says that the parrot did better than chance in both experiments.

In 12 trials of the Arabic numeral addition task, when asked “How many total?” he indicated the correct sum nine times, demonstrating that 3 + 4 is 7, 4 + 2 is 6, 4 + 4 is 8 and so on. When presented sequentially with three sets of objects hidden under three cups and asked how many, Alex offered the correct answer eight out of ten times. He determined, for instance, that 1, 2 and one jelly beans adds up to four.

Pepperberg was able to complete only one round of each task before Alex died. She would have liked to present more combinations of numerals and objects to better determine how Alex was performing addition and to see whether some errors were more common than others. But the fact that the tasks were completely new to Alex reassures Pepperberg that his performance was genuine and not, for instance, a function of practice.

“I wish that Alex had lived longer and I think this is an important study because it showed what he could do and where he was going,” she says.

Alex and a chimpanzee named Sheba are the only non-humans that have so far been shown to represent the numerical value of a summed set, an ability once thought to depend on language. “These brains can do, if not exactly what an adult human can do, really advanced behaviour that nobody expected them to be capable of,” Pepperberg says.

Pepperberg doesn’t have a video of Alex’s final experiments, but this video shows Alex adding up objects under two cups.