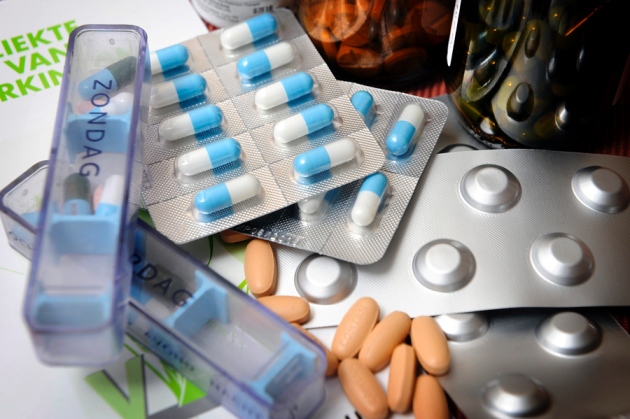 An array of drugs taken by a patient with Parkinson's disease. Research suggests placebo pills or injections can also ease symptoms.

The brain cells of people with Parkinson’s disease can be trained to reliably respond to placebo drugs, Italian neuroscientists report. The training wears off after 24 hours but the effect shows it may be possible to reduce the medication needed to treat Parkinson’s by interspersing real drugs with inert injections or pills, says placebo researcher Fabrizio Benedetti at the University of Turin, Italy, who led the work.

A few people with Parkinson’s disease do respond dramatically to placebos, but most do not1. People with the condition suffer characteristic tremors and stiff muscles because their dopamine-producing brain cells are gradually dying off. They alleviate their symptoms by taking drugs such as apomorphine, which activate receptors for dopamine.

Experimental therapies for Parkinson's disease: Why fake it?

For some conditions — such as pain and immune disorders — trials have shown2 that it is possible to train people to respond to placebos, although this practice hasn’t made its way into clinical care. Benedetti and his colleagues wondered whether the same effect might be possible for neurological disorders.

They studied 42 people with advanced Parkinson’s disease who were having electrodes implanted into their brains for a therapy called deep brain stimulation, which eases symptoms by stimulating affected brain areas directly. That surgery gave Benedetti’s team a rare opportunity to measure the activity of individual neurons in the thalamus, a brain region known to be inhibited by lack of dopamine in people with Parkinson's.

During surgery, participants were given a saline injection that they were told was apomorphine. It produced no response — unless the patients had been 'pre-conditioned' by having already received 1–4 daily injections of the real drug in the days before surgery. Those patients did respond to the saline: after the injection, their neurons showed increased activity, and their muscle rigidity dropped (as assessed by a neurologist who was not told the purpose of the study or which treatment the patients had received). Measuring the response of individual brain cells, Benedetti says, proves that changes in clinical outcome aren’t explained by any bias from patient or experimenter.

The larger the number of previous apomorphine injections, the greater the subsequent response to the saline. If patients had received four previous injections, there was “no difference between drug and placebo response”, Benedetti says. (The results cannot be due to residual apomorphine, as the drug is virtually eliminated from the body after a few hours).  The findings are published in The Journal of Physiology3.

The training is short-lived: it wore off after a maximum of a day. But Benedetti hopes that it may be possible to lengthen the placebo 'memory' of patients, by giving them real drugs for longer.

The study is important “because of its clear demonstration that clinical response and neuronal activation are clearly linked and can be trained”, says Christopher Goetz, a neurologist at Rush University Medical Center in Chicago, Illinois. “Though the group sizes are small, the results seem compelling,” adds Tor Wager, a neuroscientist at the University of Colorado Boulder, who has studied placebo effects in pain relief.

Studies of immune responses and pain, including Wager’s work2, 4, have shown — in small trials — that learned placebo effects can persist even when people know they are being given a fake drug. Benedetti says that although it is not yet clear that this “honest placebo” approach would work for Parkinson’s, it might still be possible to use placebos in clinical practice without deception by informing a patient that inert doses were being interspersed with real medication.

Alberto Espay, a neuroscientist at the University of Cincinnati in Ohio who has studied placebo effects in Parkinson’s disease, says that it will be important to check whether patients actually benefit in the long term. But he predicts that placebos could ultimately be used in clinical practice, reducing the amount and cost of medication. Benedetti suggests that placebos might also help to delay drug tolerance — where the effect of a real drug wears off in Parkinson’s patients after long-term use.

What is unclear is how exactly the effect works. Goetz thinks it may be purely a 'Pavlovian response', in which patients conditioned through experience associate injections with symptom relief.

Placebo studies have traditionally focused on a different idea: that a patient responds to a placebo if they have positive expectations that a treatment will work. Wager suggests that Benedetti’s study — along with others — shows that learned associations might work together with positive expectations to cause changes in the brain.