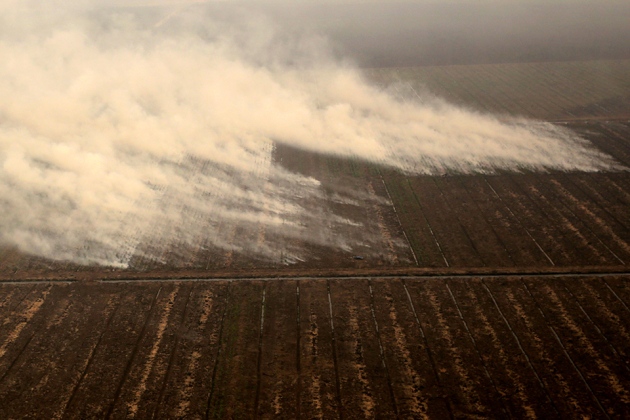 Indonesia’s Central Kalimantan province, a lightly populated swathe of Borneo, is a hotbed for greenhouse gases that are emitted through deforestation, family farming and industrial palm-oil production. Last year, these activities fuelled devastating fires that torched more than 400,000 hectares in the province and at least 2.5 million hectares across the developing nation. By some estimates, the fires released into the atmosphere more than twice as much carbon as Germany emits in a year.

Calculating the volume of greenhouse gases emitted across such a dynamic landscape is not an easy task. Nevertheless, the climate agreement made in Paris last month dictates that nearly every country will need to begin assembling detailed inventories of their greenhouse-gas emissions in a few years’ time. In Indonesia, the national government has delegated much of that responsibility to provincial governments. Soon, administrations that often struggle to provide basic public services will be required to master the complex science of carbon accountancy.

“We cannot rely on the local governments,” says Rizaldi Boer, who heads the Centre for Climate Risk and Opportunity Management in Southeast Asia and the Pacific in West Java. “We need to integrate this kind of training into the local universities.”

It is a challenge that is being faced by developing countries across the globe. The Paris agreement relies on a ‘pledge and review’ programme to reduce emissions and halt global warming over the course of the twenty-first century. Under that strategy, countries must document their progress towards voluntary commitments to limit carbon emissions. Solid and transparent data will be needed to verify that they are living up to their promises.

“This is really the compliance regime for the Paris agreement,” says Alden Meyer, director of strategy and policy for the Union of Concerned Scientists in Washington DC. “This is how you really tell how well you are doing.”

“We can’t implement this agreement without building capacity.”

Efforts are under way to build a network of professional carbon accountants across the developing world. Partnering with the Greenhouse Gas Management Institute (GHGMI), a non-profit organization headquartered in Washington DC that has trained more than 3,000 people in carbon accounting, Boer is developing a formal curriculum for universities in Indonesia. His focus lies on teaching the assessment of land-use emissions, which are the largest — and hardest to quantify — source of greenhouse gases in the country. The ultimate aim is to build a qualified workforce to feed into local governments as well as businesses and other institutions that are working to tackle climate change.

“We can’t implement this agreement without building capacity,” says John Niles, who directs the Carbon Institute, an arm of the GHGMI that develops training programmes in the measurement and monitoring of carbon emissions. “We need the right investments in the right institutions, in every country on Earth.”

Although the central government of Indonesia provides basic data on deforestation, provincial officials must calculate emissions from the expanding agriculture sector as well as from the energy, industrial and municipal sectors. After the data have been collected and the calculations performed, Boer says, officials must complete and submit 186 forms to meet the reporting requirements laid out by the Intergovernmental Panel on Climate Change.

“It’s very hard for the local governments to understand,” he says. But if Indonesia succeeds in building the technical capacity to conduct such assessments, it will become easier for the country to test new policies and to assess what will work best to reduce emissions in the future. “We have to see this as an opportunity,” says Boer.

Cost will be a barrier. Although poorer countries such as Indonesia finally agreed to a unified framework for reporting emissions in Paris, they fought hard for assurances that wealthier countries would provide money to help them to kick-start the process.

Various initiatives are already under way. The GHGMI has developed an online training course in carbon accounting and is investigating ways to provide ongoing support for individuals and institutions in developing countries. And in March, a coalition of countries and climate-advocacy organizations led by Germany is expected to launch a US$15-million initiative to help less-wealthy countries prepare to monitor and report their greenhouse-gas emissions.

The process could function differently in each country. But Yamide Dagnet, a former climate negotiator for the UK government who works for the World Resources Institute in Washington DC, suggests that academic institutions can serve as repositories for expertise on behalf of governments, which often lose their most-skilled and experienced carbon accountants to the United Nations, think tanks and corporations. “You could have universities and institutes designed to provide data, with some permanent experts and graduate students as well,” says Dagnet. “I think we need to be really creative.”

Perhaps the biggest challenge is how to move quickly. Developing countries may need to begin reporting within a few years, says Michael Gillenwater, executive director and dean of the GHGMI. The prevailing approach of hosting workshops and one-time training sessions to promote minimal local expertise while bringing in consultants to oversee one-off greenhouse-gas inventories will not be enough.

“The current model will break if you try and scale it up,” says Gillenwater. “We need more and better people and we need a different model.”