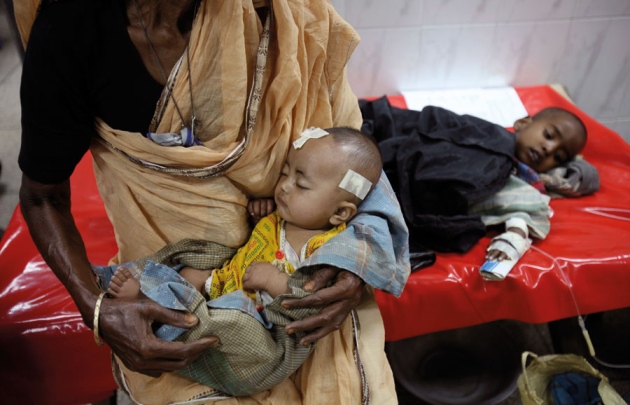 In young children, the parasitic infection cryptosporidiosis is one of four leading causes of severe diarrhoea.

Earlier this year, a massive clinical and epidemiological study1 involving 22,500 children from Africa and Asia revealed — unexpectedly — that the protozoan parasite Cryptosporidium is one of four pathogens responsible for the lion's share of severe diarrhoea in infants and toddlers. According to the World Health Organization, diarrhoea accounts for 10.5% of the nearly 8 million yearly deaths of children under five years of age2. (For comparison, malaria causes 7% of such deaths, and HIV/AIDS, just 2%.)

Vaccines and treatments are already available or fast being developed for three of the four pathogens identified: rotavirus, Shigella bacteria and enterotoxigenic Escherichia coli (see 'Child killer'). But for 'crypto', there is no fully effective drug treatment or vaccine, and the basic research tools and infrastructure needed to discover, evaluate and develop such interventions are mostly lacking.

The technical challenges of working on crypto in the laboratory have led to the perception that the pathogen is an intriguing yet intractable problem. Crypto lab cultures last a few days at most, for instance, and some of the species that infect humans cannot be easily studied in standard model organisms such as mice. As a result, funders and biologists have tended to shy away from the parasite: a search on the biomedical research database PubMed suggests that in the past five years, about 20 times more articles have been published on malaria than on crypto.

I believe, however, that with the right tools, research approach and financial backing, the prevention of deaths caused by crypto infections is a realistic goal. Furthermore, bringing crypto research into mainstream microbiology could provide fundamental mechanistic insights into intestinal infections in general.

Infection with crypto occurs when people ingest spore-like oocysts, usually by drinking contaminated water (see 'Easy targets'). Parasites emerging from these spores invade the epithelial cells lining the small intestine, and cause the cells to form internal structures that house the parasite. These structures supply the parasites with nutrients and position them at the interface between the digestive tract and its contents. Infection generally results in one to two weeks of severe diarrhoea, but in people with HIV/AIDS or in malnourished children, the disease can linger and eventually kill. 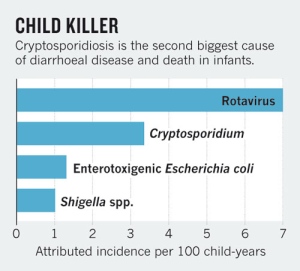 Only one drug treatment for crypto is currently approved by the US Food and Drug Administration (FDA): nitazoxanide, marketed under the name Alinia. Clinical studies3 in Egypt have shown that otherwise healthy children and adults suffering from diarrhoea caused by crypto are twice as likely to recover within a week when given the drug. But those people who are most vulnerable to the life-threatening disease need something better. In a study4 in Zambia, diarrhoea symptoms lifted for fewer than 25% of malnourished children after treatment with nitazoxanide. Meanwhile, the drug seemed to have no effect in children or adults whose immune systems are suppressed, for instance because of HIV infection.

Through horizontal gene transfer, crypto parasites have obtained various genes from the bacteria sharing their intestinal environment, some of which are known to be associated with bacterial disease. Crypto may also use products of bacterial metabolism to help it to grow and cause illness. By targeting the products of some of these genes, researchers could home in on treatments that disrupt pathways in the parasite but that do not affect human cells5.

Furthermore, crypto has a tiny genome, a simple life cycle requiring only one host and its reproduction is relatively straightforward. So it should be possible to cross crypto strains. Crossing strains that differ in the types of host they infect, for instance — such as healthy mice versus mice with a faulty immune system — could shed light on the genes and mechanisms causing disease.

Sequencing the genomes of two crypto species that infect humans6, 7 has revealed vulnerabilities stemming from the parasite's minimalist metabolism. Mammalian cells have multiple ways of producing certain metabolites; crypto often relies on just one, using components borrowed from its human host or bacteria. Drugs designed to target such pathways — interfering with enzymes that supply the building blocks of DNA and RNA, for example — show some promise.

Another option might be to repurpose drugs used to treat other illnesses8. A statin used to cut down cholesterol, for example, can interfere with the ability of crypto to get crucial lipids from its host cells. And efforts to find treatments could piggyback on existing large-scale programmes to identify malaria drugs — crypto is related to the Plasmodium parasites that cause malaria.

The main challenge to finding drug treatments for crypto, however, is the lack of tools for validating and testing potential targets or promising classes of compounds. Currently, assays are neither sufficiently robust nor scalable to exploit the high-throughput techniques typically used to screen hundreds of thousands of drug candidates.

Parasites that have been genetically engineered to synthesize proteins that produce light or colour, such as the green fluorescent protein from jellyfish, enable researchers to detect robust correlates of infection in a reproducible and cost-effective way for numerous infectious diseases, such as malaria and tuberculosis. Such technologies would be transformative for the study of crypto.

Even better than finding drugs to treat crypto effectively would be preventing the disease from taking hold in the first place.

Although crypto takes a massive toll on infants and toddlers, it is rarely detected in those older than two years, suggesting that children may develop natural immunity. This idea is supported by animal studies: in one, for instance, vaccines containing crypto protected calves and cattle9; in another, piglets previously infected with one crypto species later showed complete resistance to that same species, and showed mild symptoms on subsequent infection with a different species10.

Small studies involving about 20 adult volunteers suggest that although infection cannot prevent subsequent disease, it can reduce its severity11. So developing vaccinations containing parasites that have been rendered incapable of causing disease, through irradiation or genetic engineering, is likely to be the most hopeful approach. Such vaccines have shown promise in preventing other parasitic infections such as malaria12 and leishmaniasis.

Technology transfer from established to emerging research models can greatly aid innovation. For instance, applying knowledge and techniques associated with genetic modifications in fruitflies has revealed how mosquitoes smell and identify humans, offering avenues for the development of repellents and baits. For crypto, concepts and tools developed for the related parasites Toxoplasma and Plasmodium, including how to render them nonpathogenic, could prove useful.

Animal models that better mimic human infection and disease than current ones would allow researchers to study the impact of intestinal commensal bacteria on crypto infection. Calves and piglets, for instance, are natural hosts of the species of crypto that infects humans.

More money is key. The US National Institutes of Health (NIH) currently spends roughly US$4.3 million each year on 12 crypto projects, compared to around $300 million on more than 600 malaria projects.

Review panels for government agencies typically take a dim view of studies on non-model organisms that have a higher risk of failing than those on well-established systems, or that require large upfront investments in technology. Meanwhile, philanthropic organizations such as the Bill & Melinda Gates Foundation, based in Seattle, Washington, tend to focus on intervention rather than basic research. And industry may not see a market in a disease that mainly affects the poor.

Yet both the NIH and the Gates Foundation have already made substantial investments in projects designed to identify the causes of early childhood diarrhoea. Now these organizations have a responsibility to act on their discoveries. Furthermore, crypto kills young animals too, so the possibility of preventing it in livestock should stimulate industry interest, resources and expertise.

As well as potentially saving hundreds of thousands of young lives and reducing untold suffering for infants, children and parents, I am confident that bringing crypto to the forefront of microbiology research will have wide-ranging benefits. It is likely to be an excellent model system for understanding the complex interaction between pathogens, host nutrition, inflammation and the intestinal microbiome.