Modern humans began to spread out from Africa approximately 100,000 years ago. They settled in distant lands, where they had to adapt to unfamiliar climates, find different ways to feed themselves and fight off new pathogens. A study now suggests that it was the pathogens, particularly parasitic worms, that had the biggest role in driving natural selection — but that genetic adaptation to them may also have made humans more susceptible to autoimmune diseases. 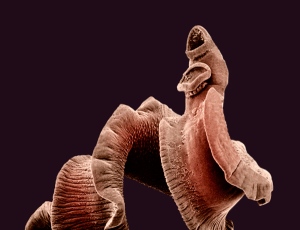 Parasitic worms such as Schistosoma mansoni caused more genetic diversity in humans than did climate, diet, bacteria or viruses.

Populations separated by distance tend to drift apart genetically over time, and roughly 95% of variability between populations is a result of that drift. But the local environment plays a part too. Genetic variants that improve survival in a given region tend to become more common in the population that lives there. By looking for correlations between the frequency of different variants in a population and environmental factors such as climate, researchers can gain a better understanding of the drivers of human adaptation.

The authors of a study published last week in PLoS Genetics1 used data from more than 1,500 people, representing 55 distinct populations, to calculate the frequency of different genetic variants. They then developed a statistical model to predict the distribution of these variants. The model incorporates three types of environmental variable that could have exerted selective pressure on the human genome: climate; the importance of subsistence strategies such as agriculture, fishing and animal husbandry; and pathogen diversity.

“Our goal was to understand which category most shaped human genetic variation,” says Matteo Fumagalli, a genomics researcher at the University of California, Berkeley, and lead author of the paper.

The researchers removed the variables from the model one at a time, to see which would have the biggest impact on the predictive power of the model. “What we show is that all three factors are important, but the strongest factor is the pathogenic environment,” says Rasmus Nielsen, a computational biologist at Berkeley, and a co-author of the study.

Parasitic worms seemed to be a stronger driver of natural selection than viruses or bacteria. That makes some sense, says Nielsen. Bacteria and viruses, which evolve quickly, might be able to rapidly circumvent any genetic advantage gained by humans. Worms, however, evolve more slowly, giving us time to solidify our defenses.

The team used the model to pinpoint the 103 genes most strongly correlated with pathogenic diversity. Nearly one-quarter of those genes are involved in immunity, in everything from inflammation to pathogen recognition. Many also seem to increase susceptibility to autoimmune diseases such as multiple sclerosis, type 1 diabetes and coeliac disease.

One plausible hypothesis, Nielsen says, is that pathogen-driven adaptation changed our genes in ways that make us more susceptible to autoimmune diseases when those pathogens are absent. “There’s a tradeoff between your immune system being too active and not being active enough,” he says. So it’s possible that past pathogen exposures led to the development of more aggressive immune systems. “If the pathogen is not there, the same genes might then end up causing autoimmune disease,” he says. “It fits very well with the hygiene hypothesis” that lack of exposure to pathogens leads to an overactive immune system.

However, Bryan Kolaczkowski, an evolutionary biologist at the University of Florida in Gainesville, says that there is not yet enough evidence to make a causal link between pathogen adaptations and autoimmune disease. “It’s a reasonable speculation, but I wouldn’t say it’s a strong conclusion of this paper,” he says. The evidence would be more convincing if the authors had found that the same genetic variants that enabled us to fight off pathogens also increased our susceptibility to autoimmune diseases. Making that connection would be a good next step, he says.

Neither is Kolaczkowski convinced that pathogens are more important than climate and diet. “A lot of adaptation in the immune system is sort of these on/off switches,” he says. But adaptation to climate or diet might be more like “fine-tuning a radio” by dialling in the appropriate response, so pathogen-driven adaptation may simply be easier to detect than other kinds, he says.

Angela Hancock, a genomics researcher at the University of Chicago, Illinois, points out that all the variables are intertwined, which can make it difficult to tease out the effect of any one factor. Climate, for example, influences the distribution of pathogens2. And Hancock’s research suggests that there is a link between pathogen-related adaptation and subsistence strategies that include keeping animals. That makes sense, she says, since many pathogens found in animals can infect humans. Even so, she says, “there’s no doubt that pathogens have been an important selective force in humans”.