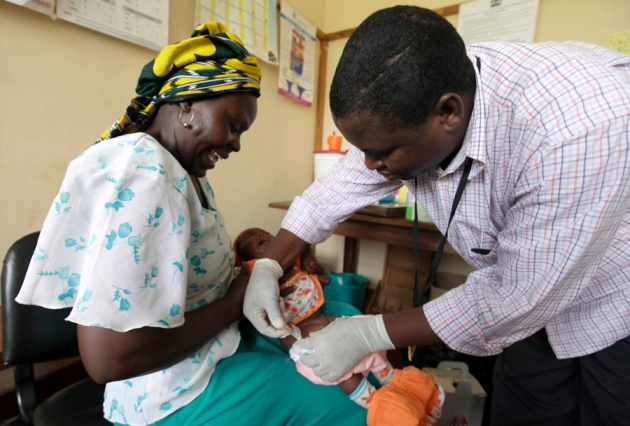 A mother holds her baby as it is given a malaria vaccine injection in a trial in Kenya, in 2010.

A malaria vaccine that has disappointed in clinical trials stumbled in part because it mimics a strain of parasite that is not commonly found in Africa, according to a study published on 21 October in the New England Journal of Medicine (NEJM)1.

The finding appears in the week that an advisory committee for the World Health Organization (WHO) will say whether they recommend the malaria vaccine, known as RTS,S, for use, despite its modest performance. That pivotal decision is being closely watched by the London-based drug firm GlaxoSmithKline (GSK) and the Bill & Melinda Gates Foundation in Seattle, Washington, who have together ploughed US$565 million into the vaccine’s development over 28 years.

The NEJM work suggests the vaccine would be more effective if it were re-engineered to match several malaria parasite strains. Although that would be welcome, says Joe Cohen, a molecular biologist who has worked with GSK on the vaccine since its inception in 1987, it would effectively create a new vaccine which would take "10 to 15 years to develop". During that time, he adds, hundreds of children will die of malaria every day. Instead, Cohen is focused on impending decisions about the tried and tested vaccine in hand. “I am waiting impatiently,” he says.

A key component of the RTS,S vaccine is a fragment of a protein found on the surface of the malaria parasite Plasmodium falciparum, called the circumsporozoite (CS) protein. People injected with the vaccine mount an immune response against its CS protein, which equips them later to fend off parasites if bitten by an infected mosquito.

But different parasites have slightly different CS proteins, and researchers who first made RTS,S-like vaccines nearly three decades ago did not have the tools to measure the extent of this variation, or its consequences for their vaccine. The latest study uses next-generation DNA sequencing to analyse parasites infecting nearly 5,000 children and infants who took part in GSK’s clinical trials in sub-Saharan Africa. Fewer than 10% of those parasites had a CS protein that matched the sequence used in the RTS,S vaccine, they found.

The vaccine warded off some malaria cases in people with a mismatched copy, but worked much better in children with an exact copy. “If it had been a perfect match, the efficacy of the vaccine over a year could have been at least 50% higher,” says Dyann Wirth, an infectious-disease researcher at the Harvard School of Public Health in Boston, Massachusetts, who led the work. Wirth suggests developing an RTS,S vaccine that includes bits of several types of CS protein. David Kaslow, who oversees the vaccine’s development at the non-profit health organization PATH, says that he and his colleagues have discussed the approach. “It’s not trivial to tweak the vaccine to match the prevalent strains in an area,” he says, “but it’s not impossible.”

Any improvement would be welcome. A report published2 in January on trials in more than 15,000 children, followed for up to four years in seven countries in sub-Saharan Africa, found that a series of four RTS,S shots reduced the number of malaria cases by only 36% in young children, and by 26% in infants. Still, this modest effect could save hundreds of lives each year because malaria kills nearly half a million people annually, most of whom are children in sub-Saharan Africa. 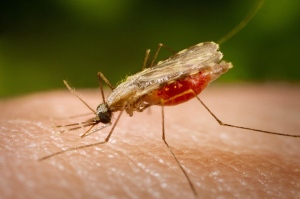 Malaria is carried by the female Anopheles mosquito.

On 24 July, the European Medicines Agency declared the RTS,S vaccine safe and effective. The committee advising the WHO is considering these factors, as well as the cost of the vaccine and how it might perform alongside other malaria measures. In November, the WHO director-general is expected to formalize the committee’s recommendation.

Even a positive WHO recommendation would not guarantee the vaccine gets used, however. African officials would consider whether to add it to their malaria programmes, and potential funders, such as the non-profit group Gavi, the Vaccine Alliance, would decide whether to subsidize it. Cohen says that GSK will charge between $1-10 per shot, covering the company's manufacturing costs and a return of 5%, to be re-invested in new vaccines for malaria or other diseases common in the developing world.

Despite the low price tag, money would be needed to deploy the vaccine, because budgets for malaria prevention and treatment in sub-Saharan Africa are already running low. Samuel Smith, director of Sierra Leone’s malaria-control programme, says that some of the country's population does not have access to insecticide-treated bed nets, and an estimated 20% are not getting gold-standard malaria drugs when they fall ill. “We need more resources,” he says, to roll out the vaccine without divesting in measures proven to reduce deaths.

James Tibenderana, development director at the Malaria Consortium in Uganda, wonders whether an improved vaccine could be developed faster than Cohen suggests. Wirth’s finding shows how much more information scientists can gather now compared to when they created the RTS,S vaccine decades ago, he says. “Ebola introduced to us a process of rapid vaccine development that broke all the rules, and got a product out there in a year,” Tibenderana says. “The world has changed. Why must we stick to vintage technology?”

The article originally incorrectly stated that David Kaslow was involved in the early development of RTS,S. The text has been corrected.