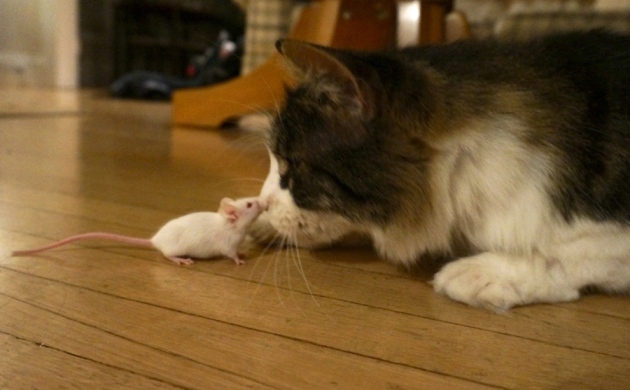 Mice infected with toxoplasmosis lose their instinctive fear for the smell of cats — and the parasite's effects may be permanent.

A parasite that infects up to one-third of people around the world may have the ability to permanently alter a specific brain function in mice, according to a study published in PLoS ONE today1.

Toxoplasma gondii is known to remove rodents’ innate fear of cats. The new research shows that even months after infection, when parasites are no longer detectable, the effect remains. This raises the possibility that the microbe causes a permanent structural change in the brain.

The microbe is a single-celled pathogen that infects most types of mammal and bird, causing a disease called toxoplasmosis. But its effects on rodents are unique; most flee cat odour, but infected ones are mildly attracted to it.

This is thought to be an evolutionary adaptation to help the parasite complete its life cycle: Toxoplasma can sexually reproduce only in the cat gut, and for it to get there, the pathogen's rodent host must be eaten.

In humans, studies have linked Toxoplasma infection with behavioural changes and schizophrenia. One work found an increased risk of traffic accidents in people infected with the parasite2; another found changes in responses to cat odour3. People with schizophrenia are more likely than the general population to have been infected with Toxoplasma, and medications used to treat schizophrenia may work in part by inhibiting the pathogen's replication.

Schizophrenia is thought to involve excess activity of the neurotransmitter dopamine in the brain. This has bolstered one possible explanation for Toxoplasma’s behavioural effect: the parasite establishes persistent infections by means of microscopic cysts that grow slowly in brain cells. It can increase those cells’ production of dopamine, which could significantly alter their function. Most other suggested mechanisms also rely on the presence of cysts.

Research on Toxoplasma has mainly used the North American Type II strain. Wendy Ingram, a molecular cell biologist at the University of California, Berkeley, and her colleagues investigated the effects of two other major strains, Type I and Type III, on mouse behaviour. They found that within three weeks of infection with either strain, mice lost all fear of cat odour — showing that the behavioural shift is a general trait of Toxoplasma.

More surprising was the situation four months after infection. The Type I pathogen that the researchers used had been genetically modified to provoke an effective immune response, allowing the mice to overcome the infection. After four months, it was undetectable in the mouse brain, indicating that no more than 200 parasite cells remained. “We actually expected that Type I wouldn’t be able to form cysts, and therefore wouldn’t be able to cause the behaviour change,” explains Ingram.

But that was not the case: the mice remained as unperturbed by cat odour as they had been at three weeks. “Long after we lose the ability to see it in the brain, we still see its behavioural effect,” says geneticist Michael Eisen, also at Berkeley.

Joanne Webster, a parasite epidemiologist at Imperial College London who co-discovered the fear-negating effects of Toxoplasma in rats4, highlights the worrying implication that if the behavioural changes of Toxoplasma-caused schizophrenia are fixed, treatments that are intended to target cysts might have no effect. However, she notes that mice are not the best model for Toxoplasma infection in humans, because they experience more severe symptoms and complications. Webster uses rats in her research.

Ingram says that her group is using mice because of the better genetic tools available to help to uncover the mechanism behind behavioural changes. However, she is not yet convinced of the link between Toxoplasma infections and schizophrenia. Her findings may actually weaken that link, because they seem to provide evidence against the dopamine hypothesis.