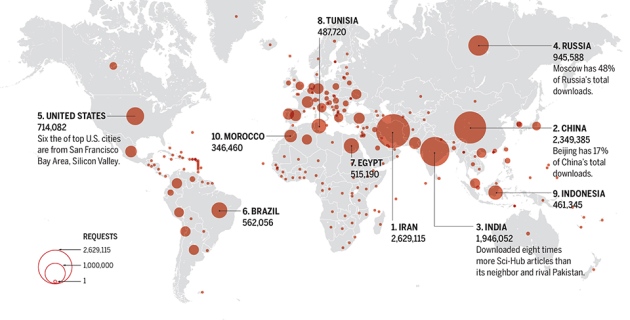 Sci-Hub is used all over the world, according to data on download requests from September 2015 to February 2016.

Every day, scientists around the world illegally download tens of thousands of research papers from a website called Sci-Hub. Even researchers at universities who, presumably, have legitimate access to journals flock to the site. The news, reported in Science last week, set off a global online conversation about what’s driving such widespread scientific piracy. Although publishers decry the use of Sci-Hub, many researchers celebrated the website and its founder, Alexandra Elbakyan, a graduate student from Kazakhstan. Björn Brembs, a neurobiologist at the University of Regensburg in Germany, tweeted:

If ever there was a person that fits the title 'hero' it's Alexandra Elbakyan from Sci-Hub https://t.co/1YRDCGw0tF pic.twitter.com/8afEAvGzHe

Others pointed fingers at publishers for not making it easy enough to find and download papers.

Elbakyan created Sci-Hub in 2011 out of frustration when she couldn’t access the articles she needed. Elsevier sued the site and won an injunction in a New York district court last year that shut the website down, only for it to reappear under a different domain, Sci-hub.io. On the day of the Science story, the Sci-Hub twitter account reported that the io domain had been blocked in many places, but it popped back up on sci-hub.bz and sci-hub.cc.

The article, written by journalist John Bohannon, used data provided by Elbakyan to reveal that Sci-Hub received requests for 28 million documents in 6 months from September 2015 to February 2016. By the end of February, users were downloading more than 200,000 document requests a day. The papers came from many major academic publishers: mostly from Elsevier, but also from Springer Nature, and even open-access ones such as the Public Library of Science (PLoS).

Tehran, the source of 1.27 million download requests, was the city with the most Sci-Hub users, and Moscow and Beijing followed closely behind. But many university towns across the United States and Europe were also hotbeds of Sci-Hub activity during this period.

Bastian Greshake, a PhD student in applied bioinformatics at the University of Frankfurt, Germany, also took a deep dive into the data, and presented his results on his blog. Among other things, he found positive correlations between the number of downloads in a given country and that country’s population size, per-capita gross domestic product and the number of Internet users, although there were some outliers. For example, Portugal and Iran had many more downloads than expected for their population size. Greshake also found that the bulk of downloads happened during the working hours of 9 a.m. to 5 p.m., which suggests that many users accessed the site from their offices.

In response to the Science article, Ben Lehner, a geneticist at the Centre for Genomic Regulation in Barcelona, Spain, tweeted his thoughts on the website's popularity:

Sci-Hub: people use it because it is faster, simpler and more reliable than the clunky official ways to get papers. https://t.co/oUY0NcqfhE

In an interview, Lehner said that it is often a hassle to obtain papers through official channels. “Even when researchers do have access, most publisher websites are not well designed,” he says. “They don’t deliver what people want, which is fast access to the PDFs of papers.”

Alexis Verger, a molecular biologist at the National Centre for Scientific Research (CNRS) in Lille, France, noted on Twitter that the second-most downloaded paper on Sci-Hub — an analysis of low-grade gliomas published in the New England Journal of Medicine in 2015 — is actually open access:

Curious fact of the day : the 2nd most #SciHub downloaded paper is #OA https://t.co/UJwAGfXP7s pic.twitter.com/Znv2P4EqIi

(Verger noted in a subsequent tweet that NEJM papers are freely available 6 months after publication.)

Ann Loraine, a bioinformaticist at the University of North Carolina at Charlotte, wondered in response:

Rik Smith-Unna, a PhD student in plant sciences at the University of Cambridge, UK, responded:

.@aloraine205 it's the only single interface for getting instant access to any paper. Nothing else even comes close to being that useful.

In the Science report, an unnamed representative of the publishing industry suggested that academic librarians are largely responsible for illegal downloads because they do not make online systems user friendly to researchers. This triggered a series of tweets from John Dupuis, a librarian at the Steacie Science and Engineering Library at York University in Toronto, Canada.

24. Do librarians share some of the blame for the mess that is schol comm?

25. Of course we do. All the stakeholder groups share some of the blame.

26. But targeting librarians, easily the least powerful stakeholder group, as the main cause of piracy is the pinnacle of hubris...

Dupuis compiled his tweets in a blogpost.

In an interview, Dupuis said that everyone involved in scientific publishing should work together to simplify and increase access to articles. Eventually, he would like to see publishers move towards a more open system, with lower subscription costs and fewer articles locked behind paywalls. He says that librarians can help to educate researchers and students about the proper way to access articles, but he adds that discouraging the use of Sci-Hub is not one of the library’s core missions. “We don’t work for publishers,” he says.

Still, even if a growing number of researchers are getting articles for free on Sci-Hub, Dupuis predicts that academic libraries will continue to pay subscription fees. “We’re not just paying for access,” he says. “We’re paying to support publishing. If all publishers went out of business in a year, that would be a problem for researchers.”

John Tagler, vice-president and executive director of professional and scholarly publishing at the Association of American Publishers, a scientific-publishing trade group headquartered in Washington, D.C., says, “Sci-Hub’s illegal activity endangers the sustainability of all scholarly communication.” He notes that large publishers are not the only victims. “Smaller publishers, university presses and non-profit societies have all had their articles stolen,” he adds.

John Dupuis is no longer head of the Steacie Science and Engineering Library at York University. He remains one of the librarians there.