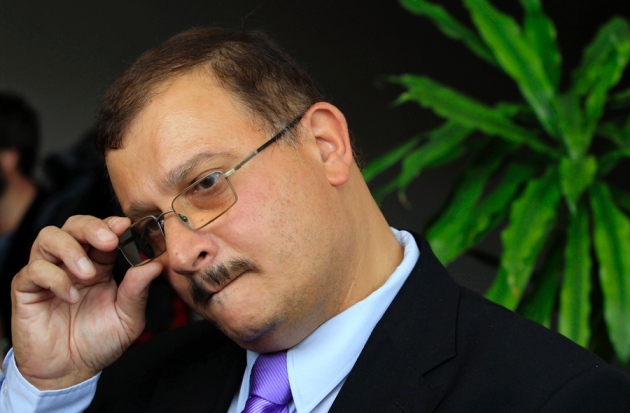 Gilles-Eric Séralini talking to reporters in Brussels in 2012.

A controversial paper linking genetically modified maize to the development of tumours and other severe disease in rats, which was published in 2012 and retracted in 2013, has now been published again, by a different journal.

Four other journals offered to publish the paper, lead author Gilles-Eric Séralini says. He and his team chose the journal Environmental Sciences Europe, he says, because it is open access so would make the study’s findings available to the whole scientific community.

The paper that went online today1 was slightly amended from the original, notably in the way the data were analysed. Four of the authors, including Séralini, also wrote an accompanying commentary2 in which they say that they were the victims of censorship and that that their critics had “serious yet undisclosed conflicts of interests”.

The authors also published their raw data; Séralini says that he wanted to be a paragon of transparency, and hopes that companies making and selling genetically modified (GM) food will follow his example. He insists that his work complies with standard international practice for toxicity studies, and laments the fact that Monsanto and other companies publish no toxicity data for their products. “Not a single study has been conducted on the long-term effects of Roundup on rats’ blood,” he says, referring to the popular brand of pesticide made by Monsanto and used with Roundup-resistant GM maize. “This is completely abnormal, and a scientific anomaly.”

The journal that originally published the paper3, Food and Chemical Toxicology (FCT), retracted it in a storm of criticism in November 2013 after Séralini’s team refused to withdraw it (see ‘Study linking GM maize to rat tumours is retracted’). A post-publication review of the paper found that “the data were inconclusive, and therefore the conclusions described in the article were unreliable.” However FCT found “no evidence of fraud or intentional misrepresentation of the data”, according to the journal's publisher, Elsevier in Amsterdam.

Séralini's team had found that rats fed for two years with a glyphosate-resistant type of maize (corn) made by Monsanto developed many more tumours and died earlier than did control animals. It also found that the rats developed tumours when Roundup was added to their drinking water.

Environmental Sciences Europe (ESEU) decided to re-publish the paper to give the scientific community guaranteed long-term access to the data in the retracted paper, editor-in-chief Henner Hollert told Nature. “We were Springer Publishing’s first open access journal on the environment, and are a platform for discussion on science and regulation at a European and regional level.” ESEU conducted no scientific peer review, he adds, “because this had already been conducted by Food and Chemical Toxicology, and had concluded there had been no fraud nor misrepresentation.” The role of the three reviewers hired by ESEU was to check that there had been no change in the scientific content of the paper, Hollert adds.

The publication of the new version of the paper gives critics no reason to change their mind, says food-allergy researcher Richard Goodman of the University of Nebraska–Lincoln and biotechnology editor at FCT. "To my knowledge, no-one has demonstrated that a two-year feeding study of Sprague Dawley rats has uncovered any hazard that actually poses a risk to human or farm-animal health," he says, referring to the breed of rodents used in the study.

Sprague Dawley rats, one of the most commonly used lab animals, become prone to health issues once they pass 18 months of age, making the results by Séralini and his colleagues “uninterpretable”, Goodman says. “If you look closely at Séralini’s data, giving glyphosate and the GMO protected one group of rats compared to those having a single treatment. The study was — and, I believe, remains — flawed."

Séralini claims that Goodman, who worked for Monsanto for seven years, was pulled from the FCT post-publication review committee after the research team complained about potential conflicts of interest. Goodman acknowledges that he withdrew from the committee at Séralini's request, because "this was the only way that Séralini would produce the data the committee needed to evaluate the paper". But, he adds, “I had no part in FCT's decision to retract the paper, and I do not see why my wealth of experience and information is considered a conflict of interest rather than useful."

David Spiegelhalter, a statistician at the University of Cambridge, UK, says: "The article still does not appear to have had proper statistical refereeing, and the methods and reporting are obscure. The claimed effects show no dose-response, and so the conclusions rest entirely on a comparison with ten control rats of each sex. This is inadequate."

Spiegelhalter also says: "The study needs replicating by a truly independent laboratory using appropriate sample sizes. I agree with the authors that this whole area would benefit from greater transparency of data and improved experimental and statistical methods."

An earlier version of this article said that the rats in the study had been given glyphosate in their drinking water. The researchers however used Roundup, not glyphosate, which is but one component of Monsanto's pesticide.

An earlier version of this article was published before Nature received the comment from Henner Hollert, which has now been included.