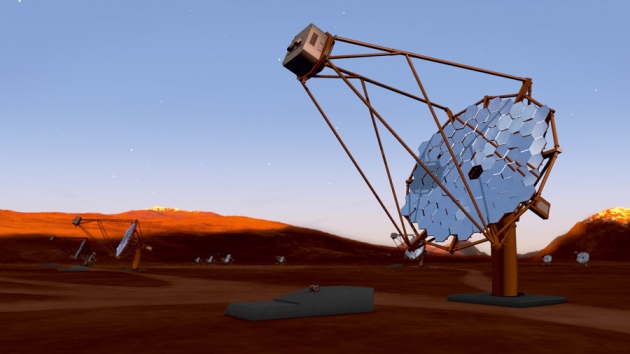 The telescope array (artist’s impression) will be split across the Northern and Southern hemispheres.

When very-high-energy γ-rays slam into Earth’s atmosphere, they trigger particle showers that emit a faint blue light. With this light, astronomers want to trace the rare γ-rays — only a few strike each square metre of the atmosphere each month — back to their sources, violent objects such as supermassive black holes. But first researchers must find a home for the planned €200-million (US$277-million) Cherenkov Tele­scope Array (CTA) — or rather, two homes. The telescope will be made up of a 19-dish array in the Northern Hemisphere and a 99-dish array in the south.

At a meeting in Munich, Germany, on 10 April, representatives from the 12 CTA partner countries inched closer to picking the sites. In the Southern Hemisphere, they narrowed the list down to two possibilities: Aar, in southern Namibia; and Cerro Armazones in Chile’s Atacama Desert. In the north, four sites remain in the running: two in the United States and one each in Mexico and Spain.

Some had hoped the panel would pick firm favourites. Last year, a committee of CTA scientists came up with a broader list of sites based on environmental factors such as weather and earthquake risk. The latest decision adds considerations such as political stability and the financial contributions of host nations. “The process is going slower than we’d like, but it’s going, and that’s great,” says Rene Ong, a physicist at the University of California, Los Angeles, who has helped to plan for the CTA.

The array would study photons in an as-yet unexplored energy region: up to 100 teraelectronvolts. Cosmic rays — protons and other nuclei — emit these photons when they are accelerated at the surface of neutron stars and black holes, and when they collide in stellar winds.

The CTA would focus on the centre of the Milky Way because of the dark matter thought to lurk there; many theories predict that dark-matter particles could annihilate each other and emit γ-rays that the CTA should detect. The array would explore physics at energy scales well beyond the scope of most powerful accelerators.

The CTA would also probe theories of quantum gravity, which try to reconcile quantum mechanics with Einstein’s theory of gravity. Some theories predict that very-high-energy photons, with wavelengths approaching the foamy quantum scale of space-time, will travel slightly slower than lower-energy photons from the same source. Observations of γ-rays at different energies could reveal arrival-time lags.

The CTA panel aims to pick a final southern site by the end of the year. Choosing the northern site may take longer, says panel chair Beatrix Vierkorn-Rudolph, deputy director-general of Germany’s Federal Ministry of Education and Research. Astronomers hope to be ready to start construction by the end of 2015 and to begin full operations in around 2020.