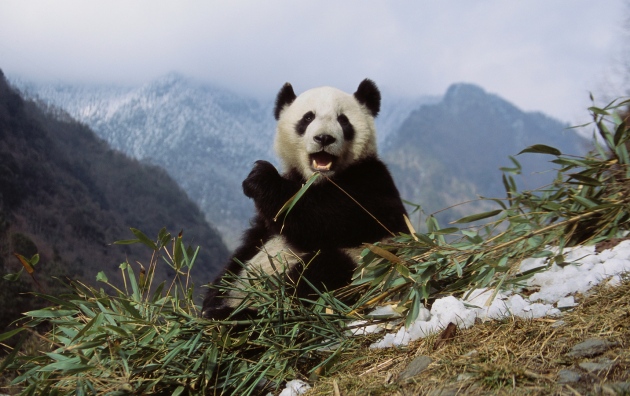 Giant pandas, an endangered species, are native to China.

Pandas make quick work of bamboo, using their powerful jaws to peel back the plant’s tough outer stalk and reach the tender heart. But new research suggests that microorganisms in the bear's gut are not quite as adept at breaking down the species' primary food source.

The study, published on 19 May in mBio1, reveals that the gut bacteria of giant pandas (Ailuropoda melanoleuca) have not evolved to efficiently break down cellulose, a hard-to-digest fibre found in plant walls. The bears’ gut microbiome is more closely related to that of carnivores, rather than other herbivores.

Ancient giant pandas, which were originally omnivorous, began incorporating bamboo into their diet at least 7 million years ago, and switched to eating bamboo exclusively 2.4 million to 2 million years ago. The bears evolved strong jaws and a ‘pseudothumb’ to help them to consume the plant. But unlike other herbivores, they did not develop an elongated digestive tract or enzymes to help break down tough plant parts.

“It is really interesting when you have a lineage that does something really differently from its relatives in terms of its food and what happens with the microbiome in relation to that change,” says Jonathan Eisen, a microbial ecologist at the University of California, Davis.

To study the panda’s gut microbiome, researchers in China sequenced ribosomal RNA in faeces collected from 45 pandas of different ages over the course of a year. The scientists compared the microbes found in the panda faeces to those in the faeces of other mammals, such as bears, lions, horses and kangaroos.

The team found little diversity in the microorganisms that live in panda guts, and none of the cellulose-degrading bacteria typically seen in other plant-eaters. Instead, the pandas' guts were dominated by Escherichia, Shigella and Streptococcus bacteria, which are normally found in carnivores.

That surprises David Sela, a genomic biologist at the University of Massachusetts Amherst. Typically, he says, a major change in an animal’s diet, such as the panda’s shift to bamboo millions of years ago, leads to changes in microbiota composition and function.

Eisen says that some of the microbes in the panda gut might still be highly efficient at breaking down cellulose. He argues that the study's authors examined only microbial composition, not function — and microbes can change function rapidly, making it hard to predict how they perform solely on the basis of the genera of bacteria present. A 2011 study2 found evidence that Clostridium bacteria in panda guts contained genes that resembled those known to produce enzymes that break cellulose down into simpler sugars.

“I’m not convinced at all that there's any limitation to the cellulolytic activity in this system based upon the data they have,” Eisen says of the new study.

The researchers say that the most important question of the study is whether the panda’s carnivore-like microbial structure can still effectively utilize cellulose. More work will help to provide a complete picture.