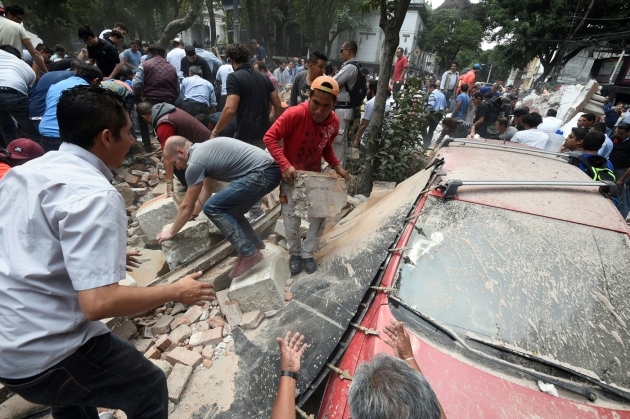 The tremor that struck central Mexico on 19 September levelled buildings in Mexico City.

A magnitude-7.1 earthquake struck central Mexico on 19 September, killing more than 200 people and reducing buildings to rubble in the states of Puebla, Morelos and Guerrero, as well as in Mexico City. The event came 12 days after a magnitude-8.1 tremor hit off the state of Chiapas — Mexico's largest quake in more than a century — and 32 years to the day after the country's most damaging tremor, an 8.0, killed thousands.

Like the recent Chiapas quake, the 19 September tremor struck in the middle of the Cocos geological plate — rather than along its edge, where it begins its plunge beneath the North American plate. Mexico’s national seismological service placed the epicentre of the quake at a depth of 57 kilometres, near the border of the states of Puebla and Morelos and about 120 kilometres from Mexico City. The earthquake occurred on a 'normal' fault, in which one part of Earth's crust moves higher than land on the other side.

Whether the 7 September and 19 September quakes are linked — and if so, how — remains to be seen. They are too far apart (about 650 kilometres) for the second one to be considered an aftershock of the first.

Big earthquakes can increase the long-term risk of seismic activity nearby by transferring stress within Earth’s crust to adjacent geological faults. But that sort of ‘static stress’ transfer usually happens only within a radius equal to about three to four times the length of the original fault's rupture, says Gavin Hayes, a seismologist at the US Geological Survey in Golden, Colorado.

The 7 September earthquake ruptured about 100 kilometres of the crust, which would imply its stress transfer reached no more than about 300 to 400 kilometres away, Hayes says. That puts the 19 September quake, whose epicentre was 650 kilometres away, outside the zone of influence. “But the time coincidence makes it pretty suspicious,” Hayes says. “A lot of people will think that they are related, and there’s going to be a lot of work on that.”

Another possibility is that the 19 September quake is an example of ‘dynamic triggering', in which seismic waves rippling outward from one quake affect faults much more quickly — and at much larger distances — than in static stress transfer. But dynamic triggering usually happens within hours or days of the initial quake, making the 12-day gap between the 7 September event and the latest big tremor hard to explain, says Eric Fielding, a geophysicist at NASA's Jet Propulsion Laboratory in Pasadena, California, who studies dynamic triggering.

His team has been analysing satellite radar images of the landscape around the 7 September quake, looking for changes in ground level that indicate which parts of the landscape have uplifted and which have dropped down as a result of that event. The data come from Europe’s Sentinel radar satellites and Japan’s ALOS-2 satellite. Fielding's team will be looking for similar information in the coming days from the 19 September quake. Radar images can help to reveal where geological stress is transferred within the ground after an earthquake.

The Cocos plate begins its dive downward off the western coast of Mexico, and then flattens out for hundreds of kilometres before taking a second, steeper dive and plunging below the North American plate. The 19 September quake happened where this second bend occurs, thanks to the geological stresses that have built up where the weight of the steeply descending plate tugs on the flat section.

Much of the worry about Mexico's seismic danger has focused off the western coast, where the slab begins its dive. There, on the plate boundary itself, is where the deadly earthquake struck in 1985, flattening buildings — particularly in Mexico City, which is built atop a shaky foundation of dried-up lake sediments. That disaster prompted Mexico to build an earthquake early-warning system, which on 19 September provided crucial seconds of warning for people to prepare for the shaking.

Many ‘seismic gaps’ remain off Mexico's west coast, where geological stress built up by the diving plate has yet to be released by an earthquake. They include the Guerrero gap, near Acapulco, considered by many scientists to be a major threat.

The death toll from the 19 September quake is expected to rise.